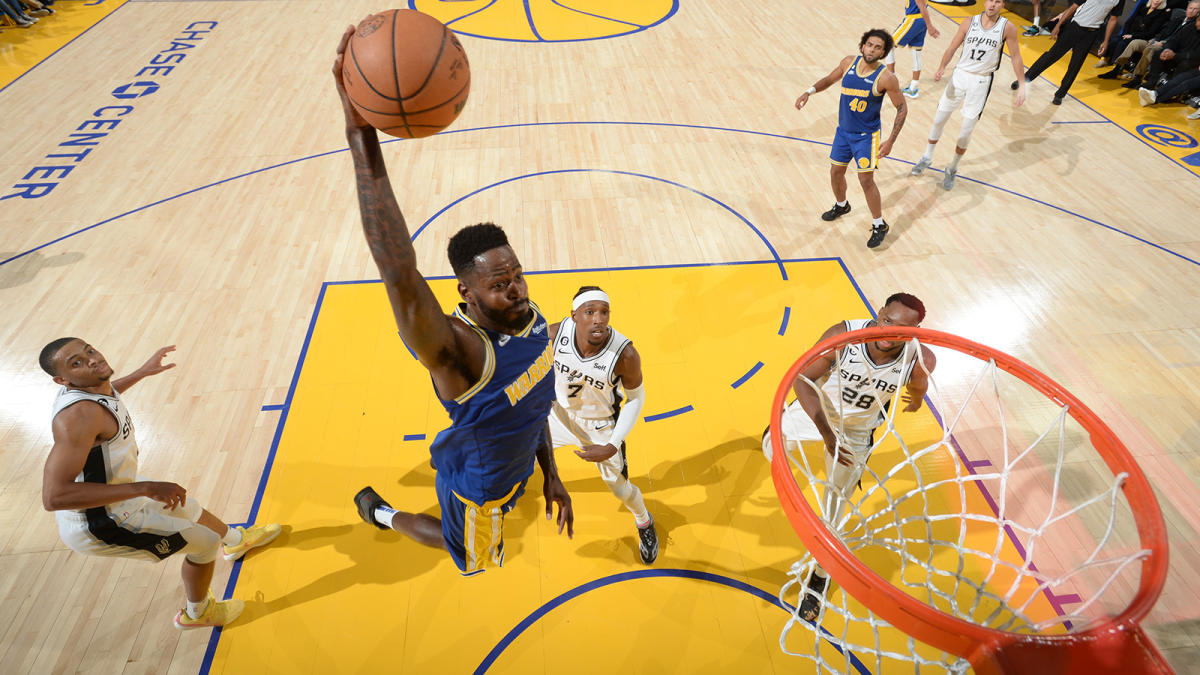 PHOENIX — Steve Kerr came to a conclusion soon after, and likely during, the Warriors‘ 37-point shellacking of the San Antonio Spurs on Monday night. JaMychal Green has to play more.

The 32-year-old veteran big man had been stuck to the sidelines prior to two nights ago. Over the Warriors’ final three games of their recent winless five-game road trip, Green compiled a combined plus-minus of minus-48 in losses to the Miami Heat, Orlando Magic and New Orleans Pelicans. He then was a DNP (Did Not Play) in each of Golden State’s next three games, with the results being a win against the Sacramento Kings and Cleveland Cavaliers and also a loss to the Kings as well.

When Kerr first turned to his bench in the Warriors’ latest win, he called two names who haven’t seen any action lately in Green and Moses Moody. Both made the most of their minutes.

“I think he’s doing a good job staying ready,” Kevon Looney said Wednesday morning after Warriors shootaround before they play the Phoenix Suns at Footprint. “He didn’t play a few games and then last game he came in and showed out. I’m excited for him and I think he can help our team a lot.

“I think he’s a great addition to our five-man group.”

That last part is key. In Kerr’s revelation, he said that Green, at 6-foot-8, will be playing a lot more small-ball center for the Warriors going forward. Of course, it’s not a coincidence that this came in the same press conference where Kerr announced 7-foot-1 center James Wiseman is being sent to the G League for an extended period of time.

Green now will join Looney and Draymond Green as the Warriors’ main centers. Those two are the anchor of a defense that has struggled this season, but has made big strides as of late. They also are two of the most vocal players on the side of the court.

Communication has been an issue as the Warriors as they find their identity early into the season. It’s an aspect that Looney and Green thrive on, but Draymond admitted Wednesday that it still is an area that needs improvement. Finding your voice on a team, whether you’re a young player or a veteran, never happens overnight.

JaMychal Green will have to feel free to speak up when he’s on the court, and his activity against the Spurs showed he can take the next step there.

“Definitely,” Looney said when asked if JaMychal Green is starting feel more comfortable there. “He’s a guy that’s been around the league, played a lot of high-level games and playoff games, so he knows what it takes to win.

“He’s just getting his footing and finding how to play in our offense and in our system.”

The numbers speak for themself. Green’s nine points off the bench tied his season high. So did his two assists, and his two blocks were the most he has produced in a Warriors uniform. He also grabbed five rebounds and his plus-18 was by far his best plus-minus with his new team.

Previously, his high was a plus-5 in a loss to the Charlotte Hornets, and he only had three games with a positive plus-minus.

In the win, Green played 16 minutes. There’s a good chance his minutes would have been even higher if it weren’t for him taking a hard fall, too.

Draymond has years of experience thriving as a small-ball center in Kerr’s complex system. What the Warriors’ newest Green brings to the table should allow him and the team to soar with his expertise as a strong rebounder, solid passer out of the post and being someone who can step back and drain a shot from long distance.

“He’s very mobile, bouncy,” Draymond said. “Plays with great tenacity and force — physicality. And then being able to step out and knock down a shot is huge. Very good on offensive boards. He can catch the ball as the dunker. On the roll, he’s a really good finisher. I think he’s starting to figure it out.

“It was good to see him back on the court last game. He took advantage of those minutes. If he can continue to do that, he’ll continue to earn his rotation minutes back and he’ll help this team.

“I have no doubt his skill set and his mentality is going to help this team out.”

The goal is to surround Green with shooters, letting him and those around him flourish. With Klay Thompson back in the starting rotation against the Suns after sitting the second night of a back-to-back in the Warriors’ win over the Spurs, that means JaMychal should get plenty of run with Jordan Poole.

Through the Warriors’ first 14 games, that already has been a reality. The pair has played more than 157 minutes together, and the numbers are far from perfect. Having another free-agent signing back adds another wrinkle, though, and should help multiple players.

“I think so,” Draymond said about JaMychal being a good partner for Poole. “He’s not afraid to use his body to set screens, which will help Jordan. The bounce that he plays with on the defensive end will help as well.

“I think Donte [DiVincenzo] being in that unit is a big help. That changes a lot for JaMychal and a lot of the guys. I think that helps a lot.”

RELATED: Dubs sending Wiseman to G League is right move for both sides

While the Warriors are without their former No. 2 overall draft pick, their two crucial free-agent signings are both healthy and should allow Kerr to create more cohesion with his second unit.

Thus far, they have been a much better team with JaMychal Green at center as opposed to power forward. The backup spot is there for the taking, and should benefit a handful of Warriors.

How long will Bryce Harper's surgery keep him out of Phillies' lineup in 2023?