On July 28, 2021, New Orleans Pelicans center Jaxson Hayes was reportedly involved in a physical altercation with Los Angeles police officers. The cops were called to the home in Woodland Hills around 3 a.m. over an alleged domestic violence dispute between Jaxson and his girlfriend. After a woman received worrisome text messages from her cousin alleging the 21-year-old boyfriend, Hayes, was acting loud and crazy, she immediately called 9-1-1, and the cops were dispatched to investigate Sofia Jamora’s residence. Sofia is a model, social media influencer and Hayes’ girlfriend.

After the police arrived, one of the officers asked, “Uh, what’s going on between you and your girl?” Hayes replied, “Uh, we were just having a little argument. She was throwing some stuff at me.” He also informed the officers that Phillip, his cousin, was also inside the house. After speaking with Jaxson, the officers wanted Sofia’s side of the story. The police told him to wait outside.

Hayes said to the cops, “What the f**k, this is my f*****g house.” One of the officers replied, “You’re right. But right now we’re doing an investigation.” Then, Hayes interrupted to ask them “Do you have a warrant to go in my house?” The cop replied, “We don’t need a warrant.” Moments later, Hayes insisted that the officers needed a warrant to enter the home. Shortly after, Phillip appeared to step closer to one of the cops.

The officer yelled, “Hey! Back up! Back up! Back up!” Hayes then said, “You get the f**k off my property!” While standing on the porch, Hayes tried to turn back inside his girlfriend’s home. However, one of the officers prevented him from walking towards the front door. After one of the cops tried putting the NBA center into handcuffs, Hayes then fought with the cops, leading to one of the officers pulling out his Taser and sending the player chest-first onto the porch.

While pressed up against the floor of the porch, he was heard yelling “No! No! No, no! Stop! Put it down, put it down!” Hayes was referring to the Taser. One of the officers was heard telling him to “quit resisting.” While on the ground, the officer yelled, “I’m going to tase you, stop!”

On video, Hayes yelled out “I can’t breathe” multiple times. Laying out of breath on the ground, he then mumbled, “Ay, gimme your f*****g badge number.” The officer then deployed the Taser. The Taser gun was pressed against Hayes’ chest. “Let me get the f**k up , y’all just tased me.” The girlfriend was heard nearby demanding that he should “shut up and just listen,” before yelling “you’re hurting him!”

The cop on the ground then said to Hayes, “Bring your arm to your back.” One of the cops standing nearby said to Phillip, “We’re not arresting him, just be quiet.” Officers oftentimes detain people with handcuffs, not to make an arrest. Hayes then pushed one of the officers into the white exterior wall, injuring him. In the end, Hayes was cited and charged with resisting arrest. Both Hayes and the officer were sent to the hospital after the incident. In the days following the event, the LAPD launched their own investigation to determine whether or not excessive force was used on the NBA player.

Image was taken by the Los Angeles Police Department

The Los Angeles Police Protective League (LAPPL) are demanding the NBA front office and Pelicans organization to suspend the two-year player for assaulting one of their officers. Thus far, Jaxson has not been fined or suspended by the league. Both Hayes’ domestic violence investigation and the LAPD Union’s investigation on determining if excessive force was used are ongoing. The LAPD have use-of-force detectives investigating the case.

In late June, the Supreme Court ruled in favor of a California driver who was pursued by the police after being followed into his garage. The driver was evading arrest. However, the judges put limits on when cops can pursue a fleeing suspect when a suspect steps on his or her own property to avoid an arrest. This applies in the event the police do not have a search warrant.

For misdemeanors in California, the police cannot automatically enter a person’s home. Probable cause is important, though. Needless to say, felonies are different. When possible, the LAPD are also trained to avoid using the Taser on a suspect’s chest. Outside the home, based on his combative behavior, it appears Hayes did not cooperate with the police right from the get-go. The six-foot-eleven, 220-lb. big man is now back in Ohio, according to his attorney, Mark Baute.

Jaxson is also the son of former NFL tight end Jonathan Hayes, who played for the Kansas City Chiefs and Pittsburgh Steelers. Jonathan is currently head coach and general manager of the St. Louis Battlehawks of the XFL League. The XFL is expected to return in 2023. 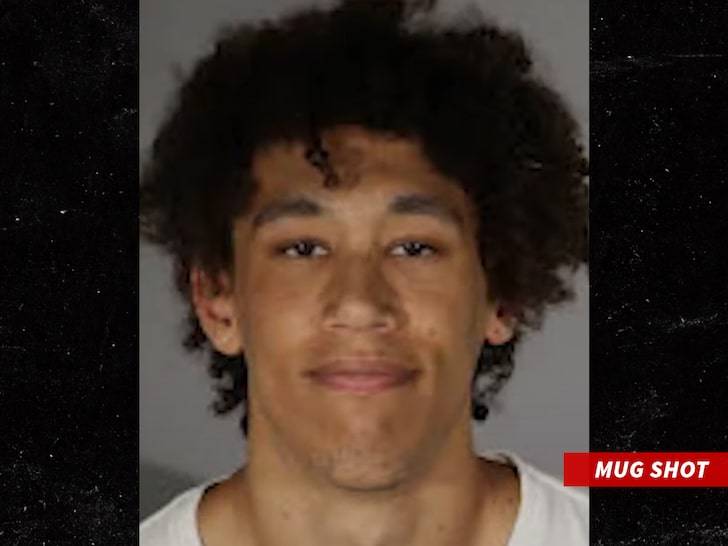 Julius Erving says NBA players today are 'softer' than his era, explains why the 76ers should be patient