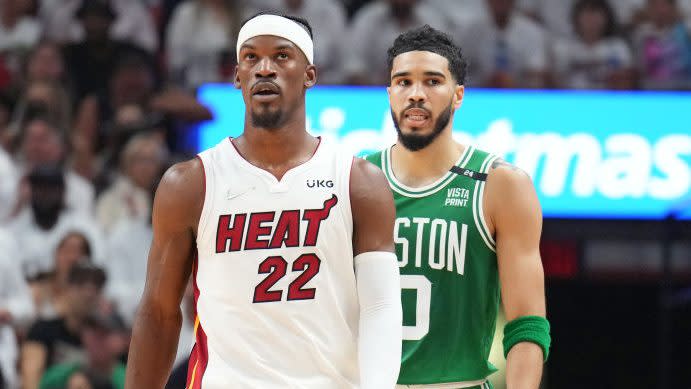 It was a tale of two halves.

There was the first half where the iron of the Celtics looked like it had been sharpened by the iron of the defending champion Bucks. Boston got into the paint for 42 points in the first half, breaking down the Heat defense with relative ease, and Jayson Tatum was the best player on the floor with 21 points and 5 assists.

Then came Jimmy Butler leading a resurgent Miami squad. The Heat’s defense both cranked up the intensity and came out connected on that end — they were physical, were in passing lanes, forced turnovers, and held the Celtics to 2-of-8 shooting in the paint in the quarter. Those stops turned into quick offense on the other end, and the Heat started the quarter on a 22-2 run, then finished with 39 points in the frame.

The third quarter scoreboard: Jimmy Butler 17, the entire Celtics team 14. Butler finished the game with 41 points, getting to the free throw line 18 times.

By the end of the third quarter the Heat were up 17 and the game was never seriously contested after that.

Boston could have help for Game 2. Marcus Smart missed Game 1 with a sprained foot, and he may play Thursday night. Al Horford also missed Game 1 due to a positive COVID test, although it is less likely he will clear protocols before Thursday.

The Celtics missed those two veterans. They are the guys who tend to calm nerves and settle the team when an opponent makes a run. Nobody on Boston could do that in the third quarter, when the Heat didn’t score a bucket for the first 7:07 after halftime.

What was more concerning was how the Celtics disintegrated in the face of the Heat pressure in the second half. Boston got away from running plays, Jayson Tatum turned the ball over on sloppy efforts, Jaylen Brown couldn’t hit a shot, and we witnessed things like multiple Payton Pritchard isolations.

Miami capitalized on all that sloppiness, plus they had 12 blocked shots on the night. Tyler Herro finished with 18 points (15 in the first half), while Gabe Vincent added 17.

It was a radical role reversal from half to half. In the first 24 minutes, the Celtics got into the paint at will, Robert Williams impacted the game (his return from injury was a huge plus for Boston), and the Celtics as a team shot 59%. Everything seemed to go right for Boston.

Yet the Celtics were only up by eight at the half. It wasn’t a good sign.

In the second half, the Celtics looked worn down, like a team that had played an emotional Game 7 two days before in another city. That may have been part of what happened to Boston, but the way the team wilted under Miami’s pressure has to be their biggest change in Game 2. Coming back from 0-2 to the No. 1 seed Heat would be a tall order.

Nets GM: Team hasn’t had conversations with Kyrie Irving yet about his contract