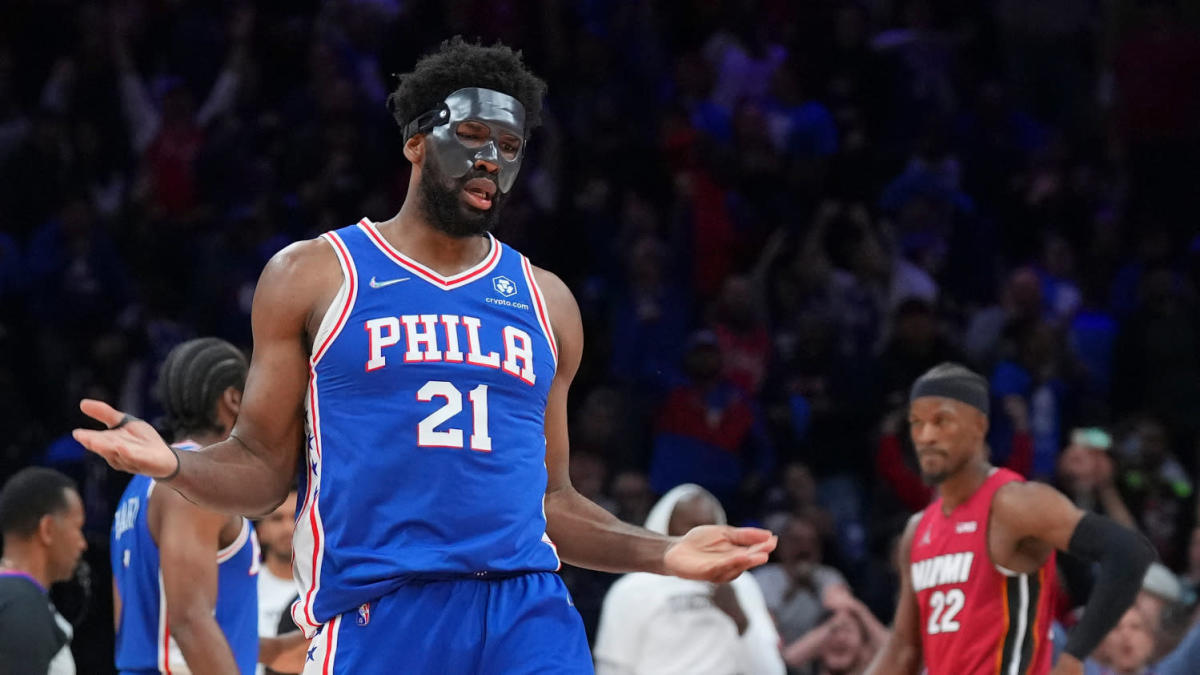 Most important part of Embiid’s masked return? It was all about being there originally appeared on NBC Sports Philadelphia

The most important part of Joel Embiid’s Friday night is that he stepped on the Wells Fargo Center floor.

Once he did that, a series that had been all about his absence flipped. Sixers head coach Doc Rivers used the word “presence” six times in his postgame media availability.

Any inclination to romanticize Embiid’s return for the Sixers’ Game 3 win over the Heat is fair enough. The list of injuries jumps off the page — a concussion and right orbital fracture eight days ago, plus a torn ligament in his right thumb. And even if he didn’t happen to be 7 feet tall and an MVP finalist for a second straight season, all eyes would have turned toward the player taking warmup jumpers with a black protective mask strapped onto his face.

Embiid paused his pregame routine at the foul line, removing the mask and asking for a towel to wipe his face. Sixers staffers made sure he’d always have a towel nearby at any in-game stoppage; the ball people stationed along the baseline who usually focus on addressing wet spots on the court had a new duty.

When he’s healthy and in full flow, the NBA’s scoring champion flirts with a sense of invincibility. At times, he’s truly been bigger and better than everyone else. He can do more than a little bit of everything.

Even with the unwieldy extra equipment and the minimal time on court over the past week, Embiid didn’t project vulnerability in an 18-point, 11-rebound performance. The bottom line is he was there. And his teammates were thrilled about it.

“I was so happy to see ’21’ hanging up in the locker room with his mask,” Tyrese Maxey said after exploding for a tremendous 21-point second half. “He’s a solider, man. He’s a solider. Thumb, mask, concussion, broken face — makes him look even uglier now. But nah, he’s resilient, man. He’s the MVP for a reason. Just the attention that he demands is great for us. It’s just a testimony to his will and to his wanting to win.”

Embiid played most of the first quarter and exited with the Sixers up eight points. Rivers’ emphasis on his presence was not overkill. The crux of Miami’s defensive game plan in the opening minutes seemed to be limiting Embiid’s catches and having help defenders ready to pounce at all times and from all locations. Early attacks were a solid counter — sealing defenders in the paint; flashing vastly superior nimbleness to Dewayne Dedmon on a couple of fast breaks; initiating offense from the top of the key.

And ultimately, it mattered that DeAndre Jordan spent the evening on the bench. Rivers employed Paul Reed as Embiid’s backup, and the Sixers’ defensive possibilities expanded into another universe with 48 minutes of centers who aren’t playing a rigged carnival game if asked to do anything besides deep drop coverage on pick-and-rolls.

Embiid said he dealt with “a bunch of symptoms” from his concussion, but he followed along as the Sixers lost the series’ first two games in Miami.

“It was very annoying,” he said. “Obviously we didn’t make shots, but we also made a lot of mistakes … it was offensive rebounding, turnovers. Their big fella, Bam (Adebayo), was dominating, and I was really pissed off watching another big man play well against my team. It’s unfortunate. Can’t take it back, so we’ve just got to focus on next game.”

Though Embiid was technically listed as doubtful until about 40 minutes before tip-off, it always felt likely he would play once he cleared the NBA’s concussion protocol.

He’s called load management “BS” and often expressed frustration with the Sixers’ caution earlier in his career. When the team lost Game 2 of its first-round series against Miami four years ago, Embiid impatiently waited to return, wanting to throw his mask on and suit up a few weeks after suffering a left orbital fracture and concussion. He posted on Instagram that he was “Sick and tired of being babied,” then got the green light for the remainder of that postseason.

Embiid was proud to play a career-high 68 games this season, including 59 of 63 after being out in November with a serious COVID-19 case.

Maxey appreciated Embiid’s availability Friday, but he also had concern about him as a person.

“I just asked him a couple of times, ‘Are you OK?’ You promise you’re good?’ At the end of the day, basketball is extremely important to all of us,” Maxey said. “It’s our job. But you want somebody to be the best that they can possibly be feeling in life in general.

“I didn’t want him to be in pain or anything, so I was just checking up on him, seeing if he was good. But like I said, he’s a solider. How many minutes did he play? Thirty-six minutes. I thought that was huge for us.”

Again, it would be appropriate to gush about Embiid’s toughness, and to highlight the last three games as compelling evidence of his MVP-caliber value — no statistics required. For what it’s worth, the Sixers’ on/off net rating split with Embiid this year was plus-11.3, per Cleaning the Glass. That’s actually the second-lowest mark of his career.

But, with white tape around the index and middle fingers on his left hand at the postgame press conference podium, Embiid wasn’t inclined to think that way.

“When I deal with this type of stuff, I just take it as what it is,” he said. “It happens. Just got to move on. It’s unfortunate. I’ve dealt with a lot of stuff, but my mind is just always about staying positive and getting back from whatever is going on and doing whatever is possible. … I think it’s more my motivation to try to win — try to win the whole thing. That’s what motivates me.”

76ers star Joel Embiid did what the Phillies’ bullpen couldn’t do: register the save