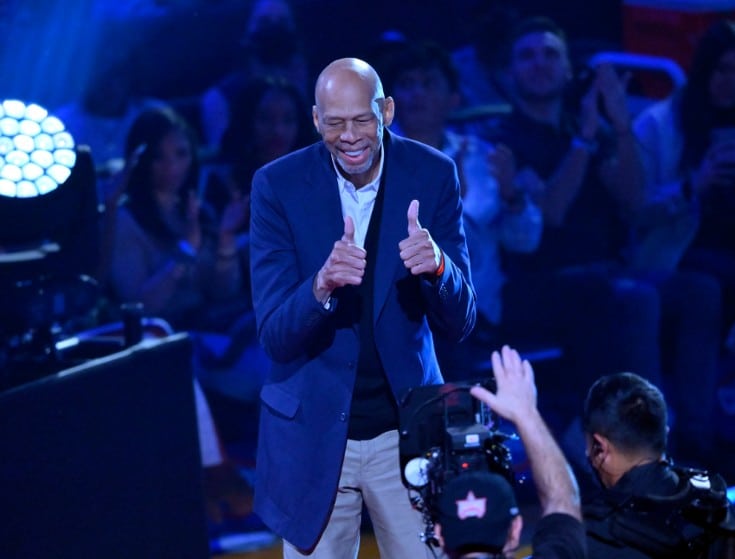 NBA Hall of Famer Kareem Abdul-Jabbar says LeBron James deserves to pass him on the all-time scoring list. In the Wizards-Lakers matchup last month, the 19-year veteran passed Karl Malone for second place on the list. This milestone was certainly earned.

Malone retired with 36,909 points, and King James needed only 19 points to tie his record. James ended his performance with a double-double, accumulating 38 points and 10 rebounds. But, the Lakers lost 127-119.

Plus, James now needs roughly 1,400 more points to become the league’s all-time leading scorer. Needless to say, assuming the 37-year-old can stay healthy, the record will be his next season.

Earning the all-time scoring record would add to his legacy. After the four-time MVP passed Malone, Abdul-Jabbar was asked about James’ accomplishment.

“I think its about time. I’m not gonna get jealous of LeBron, he deserves it,” Kareem Abdul-Jabbar, to @malika_andrews on the ESPN broadcast, when asked about LeBron eventually passing his all-time regular season scoring record.

The center finished his playing career as a six-time champion, two-time Finals MVP award winner, 19-time All-Star and made All-NBA First-Team 10 times. And, he was selected first overall by the Milwaukee Bucks in the 1969 NBA Draft. He was inducted into the hall of fame as a player in 1995.

Moreover, Abdul-Jabbar also disagrees with James’ COVID-19 vaccine stance, or lack there of. The big man mentioned to ESPN’s Dave McMenamin, “Some of the things he’s done and said are really beneath him, as far as I can see. Some of the great things that’s he done, he’s standing on both sides of the fence almost, you know?”

Regardless of whether or not one agrees with the retired legend, everyone can agree that this is a divisive topic. Furthermore, this is a personal issue for many people, but all individuals should have the right to voice their opinions on the subject matter.

Kareem Abdul-Jabbar with a follow-up statement on his LeBron James criticisms pic.twitter.com/lO34a2rkWL

“It makes it hard for me to accept that when’s he’s committed himself to a different take on everything; it’s hard to figure out where he’s standing. You’ve got to check him out every time.”

However, it’s understandable where Kareem Abdul-Jabbar is coming from. On Instagram, LeBron posted a meme comparing the flu and cold to COVID-19. Even if fans find it comical, still not much is known about the virus.

Additionally, one thing most folks can agree on as well is that no one should ever feel demonized for making a choice, especially when not much is known about the vaccines. Both sides make interesting observations.

Though, at this point, it’s a topic many people won’t touch with a ten-foot pole. In other words, let bygones be bygones and agree to disagree. Two NBA legends with different beliefs is nothing new. At least everything was kept civil.