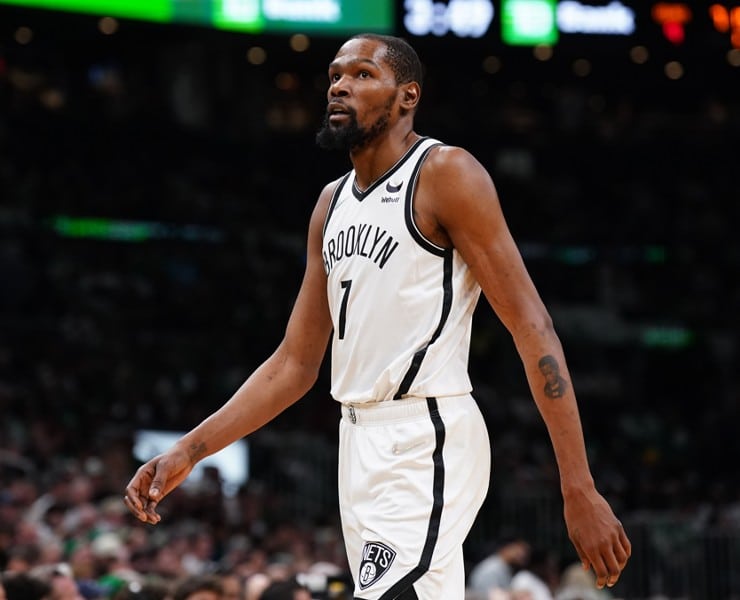 In a shocking turn of events, Brooklyn Nets superstar Kevin Durant will remain with the team for the foreseeable future after crunch talks with the front office and coaching staff in Los Angeles.

Durant had originally submitted a trade request at the end of June when it appeared that Kyrie Irving was also set to depart Brooklyn, however after opting in to his player option for 2022-23 it set the tone for what was to come.

Teams such as the Boston Celtics, Miami Heat, Toronto Raptors and Phoenix Suns were named as potential suitors to land Durant, but none were willing to pay the extraordinary asking price set by Sean Marks.

Reports had surfaced some weeks ago that the 33-year-old handed owner Joe Tsai an ultimatum – fire Sean Marks and Steve Nash or his trade request would remain.

The Nets have reached a solution and will run it back next season following an embarrassing 4-0 defeat in the first round of the playoffs at the hands of Ime Udoka’s Boston Celtics.

The Nets are running it back:

A top ___ seed in the East. pic.twitter.com/khNSfoec0c

Sean Marks said: “We are focusing on basketball, with one collective goal in mind: build a lasting franchise to bring a championship to Brooklyn.”

The Nets will remain one of the title favourites ahead of the 2022-23 campaign, opening their season against Zion Williamson and Brandon Ingram’s New Orleans Pelicans on October 19.

AFC East Mailbag: Will Tua or Mac Jones step up? Can Breece Hall be a top rookie?