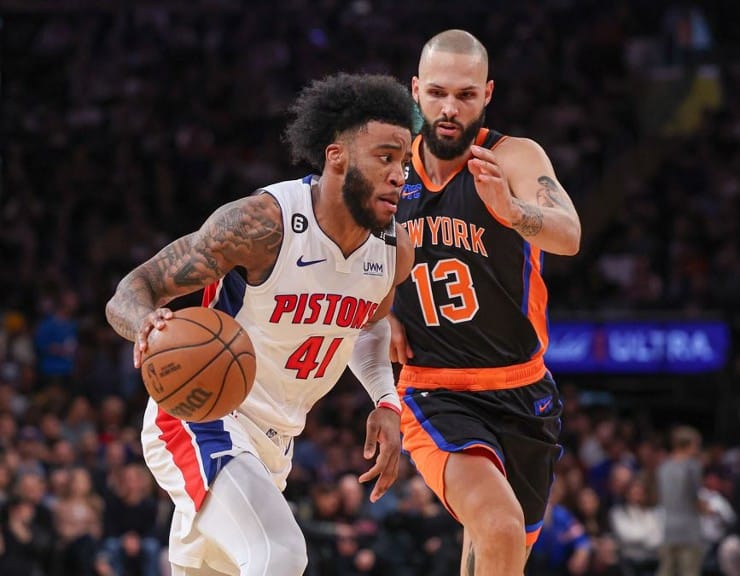 New York Knicks guard Evan Fournier set a franchise record for most 3-pointers last season with 241, and this season he went from starter to a reserve to falling out of the rotation.

A few NBA betting sites are giving the Knicks the ninth-lowest odds to win the championship in 2023. Check out which sportsbooks are showing higher playoff odds for the Chicago Bulls and Atlanta Hawks.

The Knicks went with a nine-man rotation vs. Jazz, leaving Evan Fournier and Grimes on the bench. pic.twitter.com/1DH745JQQy

“How hard is it? It’s not easy. I’ll tell you that,” Fournier said after coach Tom Thibodeau benched him in the Knicks’ 106-103 win over the Jazz on Tuesday night.

While healthy, it was the first time the 30-year-old missed a game with the Knicks. For the NBA veteran, attitude is everything. Despite falling out of the rotation, Fournier will continue to practice for each individual game.

Of the 13 appearances this season, the guard made starts in seven contests. Since Fournier was averaging a career-low 6.9 points per game, Thibodeau thought it was for the team’s best interest.

For more in-depth statistics, the Knicks guard recorded career-worst numbers consisting of a usage percentage of 17.3% and a true shooting percentage of 47.4%.

Through three quarters, Knicks have gone with a nine-man rotation tonight vs Utah. Evan Fournier hasn’t played yet. Quentin Grimes, who played 8 minutes in each of the previous two games, hasn’t played yet. https://t.co/R5Xg9tGdRM

Even the guard’s 55.4% TSP was better compared to this season.

Despite this unfortunate news, his desire to continue playing the sport is still alive. “I mean, I’ve got to keep that mindset [this can change] for sure,” added the Knicks guard.

“If I’m thinking about staying on the bench for the rest of the season it’s going to be awful. Mindset is always the same. Do your work every day and live [with] the result.”

This rotation change is likely temporary. After all, Evan Fournier signed a four-year, $73 million contract with the Knicks last August. He’s now earning $18 million this season to ride the bench.

PHOTOS: Best images from the Thunder’s 121-120 win over the Wizards