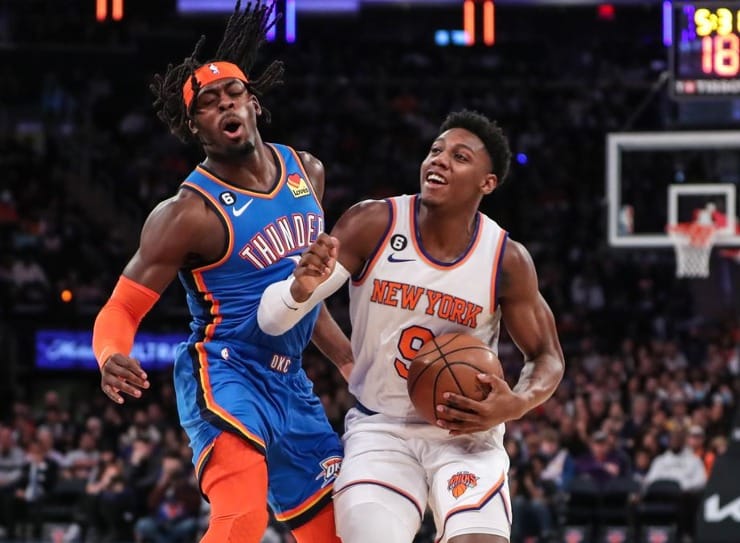 New York Knicks guard RJ Barrett has no problem with defenders allowing extra space on his shot attempts. When wide open, the fourth-year player is one of the best mid-range shooters on the team.

However, the 22-year-old is underperforming this season. Barrett’s true shooting percentage is 49.5%, the guard’s lowest since his rookie season. Though, he’s recording a career-high 3-point attempt rate of 35.2%. That boils down to 5.7 threes per game.

Based on a few NBA betting sites, the Knicks have the ninth-lowest odds to win the championship in 2023. But some sportsbooks are anticipating another playoff appearance this season.

“It’s an easy bucket, in my opinion,”

“It’s an easy bucket, in my opinion,” Barrett said on opponents leaving him uncovered. “So, I’d rather them do that.” Over the last three games, the guard has shot 0-for-16 from 3-point range.

On Sunday, he missed both 3-point attempts against the Thunder, finished 0-for-5 against the Jazz on Tuesday, and went 0-for-9 versus the Nuggets on Wednesday.

“The shot is wide open, I’m going to shoot it,” continued Barrett. “I don’t have a conscience that way. I’m comfortable. I work too hard on my game.”

In September, the Knicks guard re-signed with the team on a four-year, $120 million contract. Of course, Barrett was the first player to agree to a multi-year extension with the franchise after a rookie deal since Charlie Ward in 1999.

Unfortunately, the Duke product has not yet lived up to his large contract. Last season, in 70 starts, Barrett averaged 20 points, 5.8 boards, and 3.0 assists per game. He also shot 40.8% from the field and 34.2% from long range.

Kendrick Perkins: Celtics have the deepest roster in the NBA