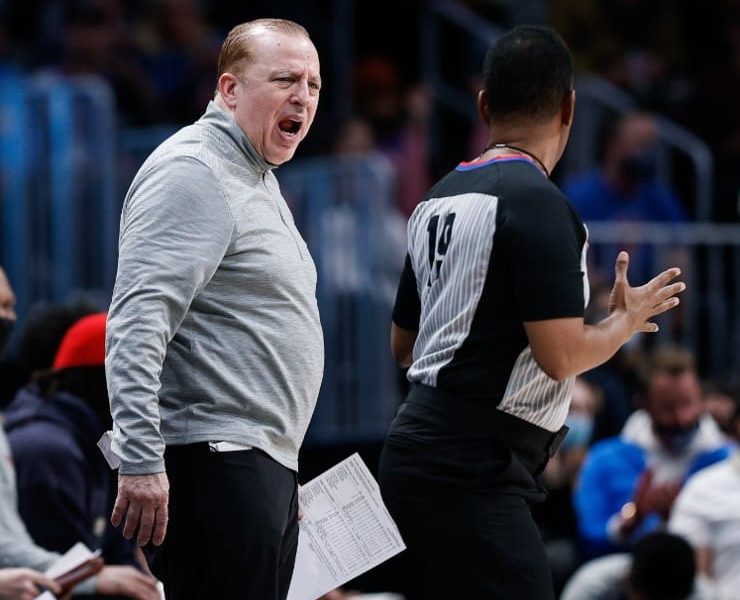 In 2021, the New York Knicks made the playoffs for the first time since the 2012-13 season. And, it was head coach Tom Thibodeau’s first season coaching the team. It all makes sense why general manager Scott Perry wants to bring the veteran coach back. Leon Rose, the president of the Knicks, agrees. He wants to retain his guy.

According to ESPN’s Adrian Wojnarowski, Thibodeau’s job is safe in New York. “People have speculated about the Knicks and Tom Thibodeau, who was just Coach of the Year last year,” said Wojnarowski. “I’m told he is safe in New York. He’s got the support of ownership, Leon Rose the GM and largely the locker room.” Plus, the Knicks picked up Thibodeau’s fifth-year option after he won Coach of the Year in 2021.

The Knicks are expecting to keep Tom Thibodeau beyond this season, per @JakeLFischer pic.twitter.com/jsz0LSBCXb

Moreover, this news should raise several questions. Will Derrick Rose return for another season? How will Thibodeau motivate RJ Barrett and Julius Randle? Also, what offseason moves will the Knicks’ front office and veteran coach partake in to improve the roster? Thibodeau’s philosophy is centered on defense. The coach has to get his team back to the playoffs next season.

In 2021, Julius Randle won the NBA’s Most Improved Player (MIP) award. Likewise, Thibodeau won his second career Coach of the Year award. It was his first NBA award since 2011. Of course, the Knicks finished fourth in the Eastern Conference.

The last time New York concluded its regular season with a top 5 spot in the conference was back in the 2012-13 season. In 2013, with a record of 54-28 (.659), the Knicks went on to lose in six games of the Conference Semifinals versus the Pacers.

Anyway, the Atlanta Hawks bounced them in five games of the first round of the 2021 NBA Playoffs. While Tom Thibodeau has yet to win his first NBA championship as a head coach, he won a chip with the Boston Celtics in 2008 as the associate head coach.

As of yet, the Knicks rank 12th overall in the Eastern Conference this season. It should go without saying that New York has taken several steps back. With no shot of qualifying for the postseason, all parties involved have plenty to time to prepare for next season. The 2022 NBA Draft is Jun. 23.

Projecting how the NL season will play out

Lonzo Ball injury update: Bulls guard out for rest of season due to setback in recovery from knee surgery