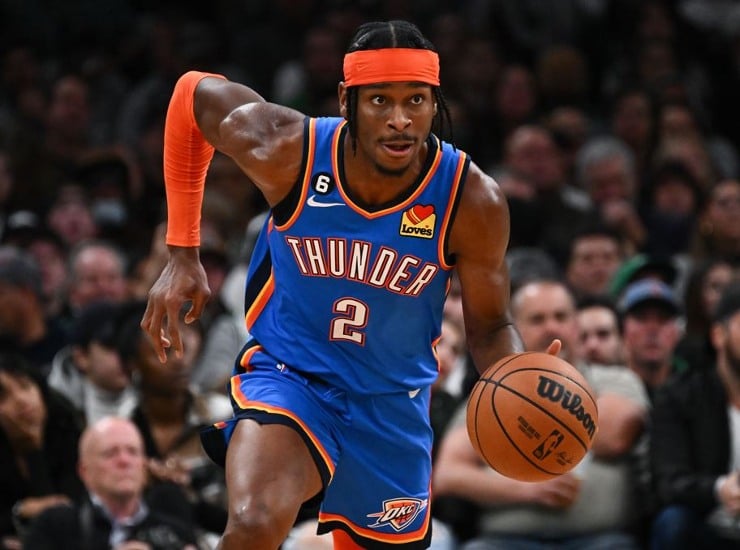 Per some NBA betting sites, Shai Gilgeous-Alexander has the 19th-best odds to win MVP in 2023. A few sportsbooks are showing better odds for LeBron James and Devin Booker.

Kyle Kuzma says he believes Shai Gilgeous-Alexander of the Thunder is a “top-5 guard” in the NBA right now. High praise.

“Shai is killing it this year,” said Kyle Kuzma. “First in NBA in drives, he’s getting downhill, super crafty, unbelievable pace. He’s probably a top-5 guard in the NBA. To me, he’s a phenomenal player.”

Additionally, the Kentucky product has recorded at least 30 points in nine games so far this season. He has not yet finished with a double-double or triple-double, but the guard still has a lot of time.

Michael Jordan, Allen Iverson, and James Harden are the only players in NBA history to average a 31/4/5/2 stat line in a season. If the Thunder guard continues to play this great for the remainder of the season, he’ll join these three players.

Gilgeous-Alexander also has a career-high player efficiency rating of 29 and a career-best 63.3% true shooting percentage. So far, he ranks fifth in the NBA this season in points per game.

Kyle Kuzma has to put his answer about Shai Gilgeous-Alexander on hold to be a part of the Wizards breakdown huddle 😂 pic.twitter.com/pfxcBw8g29

Even if he doesn’t win MVP in 2023, Gilgeous-Alexander is on track to receive his first All-Star and All-NBA selections of his five-year career. He broke new ground.

At least Kyle Kuzma is proud of him.

In the 2021-22 season, the Oklahoma City guard logged six double-doubles and one triple-double as well.

For more in-depth statistics, the Thunder have outscored their opponents by 3.1 points per 100 possessions with Gilgeous-Alexander on the court.

In comparison, he’s right up there with Dallas Mavericks guard Luka Doncic (3.5) and is exceeding Brooklyn Nets forward Kevin Durant (1.1). Needless to say, these are all MVP-worthy numbers.

For Thunder fans, Kyle Kuzma said what they already knew.