Kyrie Irving is drawing criticism from all corners of social media after sharing a crazy Alex Jones rant from 2002 on his Instagram stories. In the video from 2002, the InfoWars host famous for whacky conspiracy theories, talks of government overlords, secret societies and corrupt empires that want “complete tyranny”.

Brooklyn Nets’ Kyrie Irving is again causing controversy after sharing an Alex Jones video from 2002. In the video, the former QAnon supporter states that the ‘New World Order’ is releasing deadly viruses and plagues to cause “complete tyranny”. The video, titled, “Never Forget – Alex Jones Tried To Warn Us” also features Jones ranting about secret societies and government overlords. 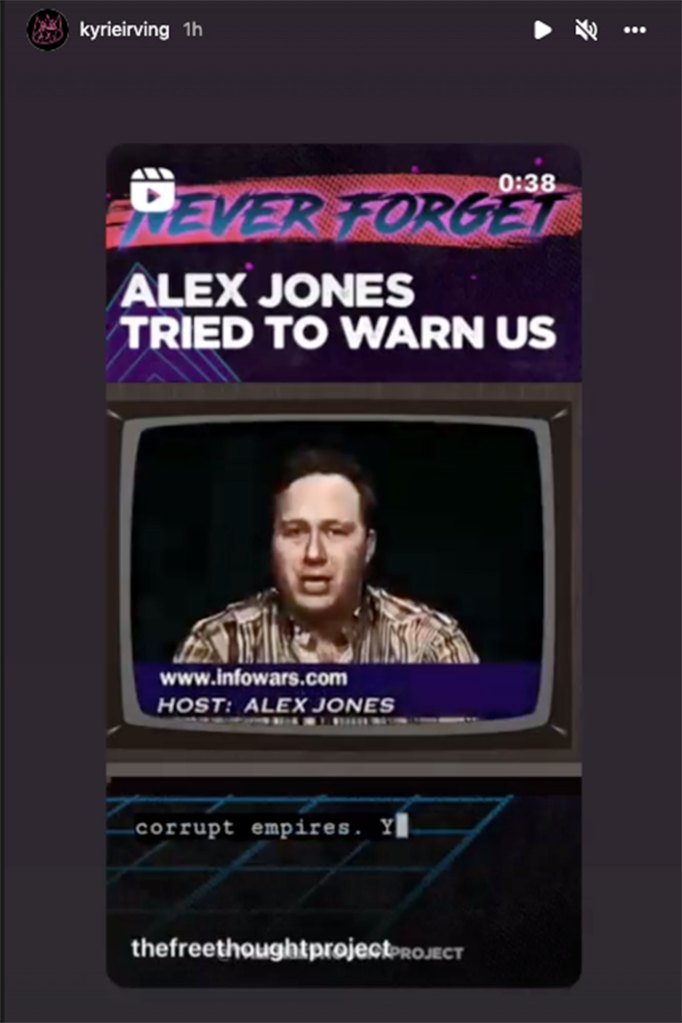 Jones was recently sued for defamation by parents of the deceased of the Sandy Hook massacre, which he claimed was fake. Jones was found guilty and ordered to pay roughly $50 million in damages.

Not his first rodeo

This is not Kyrie Irving’s first trip into the land of conspiracy, he is almost a renowned conspiracy theorist at this point. Irving went viral back in 2017 when he claimed that the earth was flat and there are not any real pictures of the planet. However, the Duke-educated point guard later apologized for his comments saying,

“To all the science teachers, everybody coming up to me like, `You know I’ve got to reteach my whole curriculum?’ I’m sorry.”

He said at the time he was into conspiracy theories, and that does not seem to have changed.

I did my own research

Irving missed the majority of the 2021/22 season while playing for the Brooklyn Nets. New York imposed a COVID-19 vaccine mandate meaning unvaccinated players couldn’t play in the city. Despite the mandate, Irving refused the vaccine and missed all of the Nets’ home games.

He bizarrely described himself as a ‘martyr’ for his stance and has yet to publicly reveal his reasons for not receiving the vaccine. We can only imagine that he did his own research.