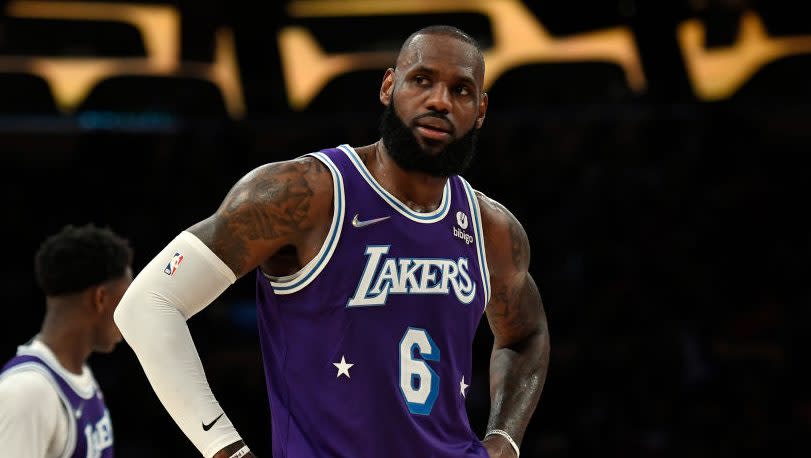 LOS ANGELES — It was just one game out of 82, but it felt like a microcosm of the Lakers’ season.

It started with plenty of buzz — this time around the return of Anthony Davis, who had been out since the All-Star break with a foot injury — and Los Angeles fed off that, hitting 10-of-13 shots to open the game. But five turnovers in that stretch and some iffy defense meant the Lakers didn’t take advantage of the hot start, the Pelicans just hung around and even led at points.

LeBron looked like an MVP for stretches, playing through a sore ankle and still doing the things that made him unstoppable at his peak — hitting stepback 3-pointers and being a freight train in transition aggressively going to the rim. LeBron was even diving over Stranger Things stars to try and save balls going out of bounds.

The Lakers won the third by just one point despite LeBron’s effort. The other Lakers were not playing up to his standards.

Then taking a lead into the game’s final minutes, the Lakers watched the Pelicans execute better, defend better, and Brandon Ingram and CJ McCollum hit tough shots while the Lakers’ stars missed. The Pelicans were clutch, the Lakers were not. Again.

The result was a 114-111 Pelicans win that all but ended the Lakers’ hopes of even making the play-in.

“The big picture was that it was pretty much a must-win for us and we didn’t get the job done,” LeBron said. “We had good opportunities on the night, but we didn’t make plays down the stretch and they did.”

The Pelicans earned the victory, and with it they are all but locked into the No. 9 seed in the West. New Orleans is three games ahead of Los Angeles and has the tie break with five to play. Despite all the turmoil and missing players in New Orleans this year, that team found a way to make the postseason.

The Lakers’ situation is now much more dire. Los Angeles sits as the No. 11 seed, one game back of the Spurs and the final play-in spot in the West, but the Spurs have the tiebreaker, so it is in practice a two-game lead. Meaning if the Spurs go just 1-4 the rest of the way (they do face the Trail Blazers one more time), the Lakers need to go 3-2 against a schedule that includes playing the Nuggets twice plus the Suns. That math is already daunting, and if the Spurs do better than winning one more game the rest of the way, things get much harder.

After the game, the Lakers said all the right things about taking it one game at a time, continuing to play hard and controlling what they can control, but the frustration of this game and this season was evident in their voices.

Asked after the game about the sprained ankle that caused him to miss a week and made him a game-time decision Friday, LeBron said it was sore but he would be in treatment for the next 36 hours so he could try to play Sunday afternoon against Denver. Davis also said he was fatigued and sore at the end, but that couldn’t be an excuse.

In a game that had so much pressure, Lakers coach Frank Vogel said he went with a playoff-game rotation, and he leaned into his veterans. Avery Bradley and DJ Augustin got serious run, while Austin Reaves and Talen Horton-Tucker never got their name called. Going against Jonas Valenciunas, the Lakers also started big with Dwight Howard playing.

There were good moments for the Lakers. The Davis at center lineup with LeBron, Malik Monk, D.J. Augustin, and Avery Bradley went on a mini-run in the first half because the Lakers have always looked better with shooting around LeBron and AD.

Russell Westbrook started the night 1-of-7 and sat with four fouls, and after an airball early in the fourth a Pelican player trash-talked him about it. Westbrook jawed back — and then drained two 3-pointers (with a Malik Monk 3 on the possession in between). He took over and gave the Lakers a six-point lead.

But as it has been all season, the Lakers couldn’t sustain that momentum because of their weak defense. CJ McCollum had 32, Brandon Ingram 29, and those two killed it with mid-range shots. Late in the game, with the Lakers down one and needing to foul, they were slow to foul Valenciunas or Trey Murphy, and it took Westbrook fouling McCollum — one of the Pelicans’ best shooters and not the guy they wanted to foul. He hit both foul shots.

LeBron led the Lakers with 38 points on 13-of-23 shooting, but as it has been all season, the Lakers couldn’t win even when he played brilliantly. Davis had 23 points and 12 rebounds in his return to the court.

Vogel, Davis and the rest of the Lakers said all the right things about believing in themselves, not giving up on the season, and taking it one game at a time. Exactly the things they should say.

But the Pelicans beat them and took their lunch money — if the Lakers’ first-round NBA Draft pick is 10 or earlier (right now it would be the No. 8 pick) it goes to the Pelicans. The same Pelicans that were the better team on Friday night.

The Pelicans can look at wins like this, how this team came together in the clutch, and envision it with Zion and another top-10 pick. This team seems poised to make a leap in the coming years.

The Lakers need to play out this string. Then this summer, expect GM Rob Pelinka to take a sledgehammer to what he built, because as Friday night showed, it’s not very good.

LeBron James, Anthony Davis both officially in for Lakers vs. Pelicans LeBron James (on April Fool’s Day): ‘I’m out for the season… PBT Podcast: All-NBA

Jazz vs. Warriors: Start time, where to watch, what’s the latest