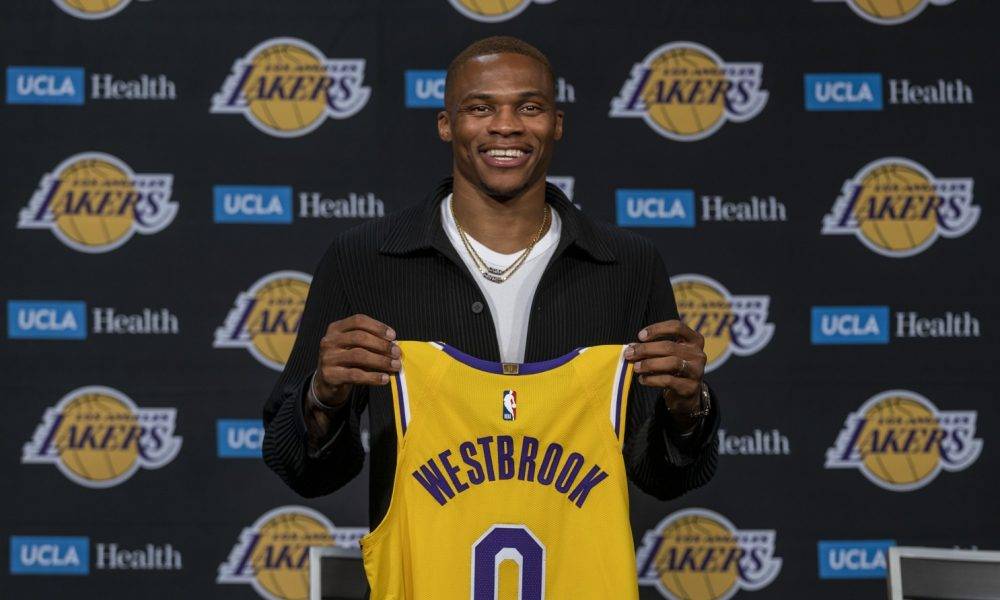 On the Los Angeles Lakers, point guard Russell Westbrook is projected to earn over 25.5 triple-doubles in the upcoming 2021-22 NBA regular season. According to BetOnline, bettors can pick the over 25.5 (-120) or under 25.5 (-120). Moreover, showing +2500 odds, his MVP odds also rank 14th in the league. On May 10, 2021, in the Washington Wizards‘ 125-124 loss against the Atlanta Hawks, Westbrook broke Oscar Robertson’s record for career triple-doubles. In 1974, Robertson retired from the league with 181 career triple-doubles.

The 32-year-old guard has earned 184 triple-doubles over the course of 13 seasons. In the 2020-21 NBA season, he finished with 38 triple-doubles on the Wizards. Playing with three-time All-Star Bradley Beal, Russell ended his performance with the second-most triple-doubles in a season in his career in 2021. In the 2016-17 season, his MVP season, he accumulated 42 triple-doubles. Will he earn as many now that he’s about to be five years older and back in the Western Conference?

Keep in mind he has 104 career triple-doubles at home and 80 on the road. Last season, in 65 games played, Westbrook averaged 22.2 points, 11.5 rebounds and 11.7 assists per game. Not to mention, Westbrook could have a bigger advantage playing at the Staples Center than inside the Capitol One Arena. After all, he is playing for a well-run organization. His fan support at home games will now be similar to his playing days with the Oklahoma City Thunder.

Will Russell Westbrook still be a Triple-Double machine in LA? pic.twitter.com/edMPyrjcnX

Can Russell Westbrook lead in triple-doubles and win an NBA championship?

Then again, the location might not be as important for the guard, considering he has dominated countless times on the road throughout the course of his playing career. Though, the pressure is still on him to perform at a high level, especially in Los Angeles. A few of the more notable factors for Westbrook on the Lakers is playing alongside LeBron James and Anthony Davis. He is now part of their Big Three. All three players will have to stay healthy if they want to remain at the top of their conference.

Furthermore, Westbrook is one of the favorites to lead the league in assists. His odds are +200, ranking next to James Harden (-110), Trae Young (+400) and Luka Doncic (+600). It is possible for the nine-time NBA All-Star to lead the league in triple-doubles and assists, but he has to find a way to fit in with his new teammates. Ball control is vital.

He likes playing aggressively and bulldozing his way to the rim, so scoring points and piling on the assists should not become a problem for the guard. What it comes down to is how much Westbrook wants to win a championship. It sounds like a tall order for the two-time scoring champion to lead his team in triple-doubles and help the organization win a tie-breaking 18th NBA title, passing the Boston Celtics for most championships.

Is Wandy Peralta proving he should be Yankees closer over Aroldis Chapman?