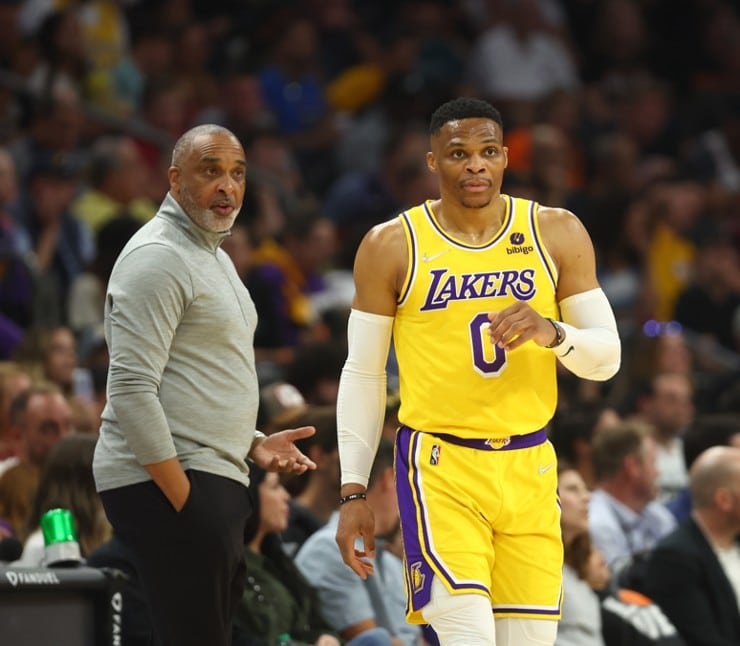 Russell Westbrook is once again the center of Lakers’ news. Even amid Los Angeles bringing back Dennis Schroder, the former MVP is still a question mark regarding what role he will have this upcoming season. It will be interesting to see how he and the newly acquired Patrick Beverley will co-exist. However, things are more interesting with another guard added to the mix. New Lakers head coach, Darvin Ham, recently said he will be willing to make whatever difficult rotation decisions lie ahead in order to get Los Angeles back to the top. An interesting quote considering new reports also says that the organization is strongly considering a bench role for the nine-time All-Star. Would Russ allow this and would it actually work are the real questions.

To say last year was a down year for Westbrook would be an understatement. He finished the season with totals of 18.5 points, 3.8 turnovers, 7.1 assists, and 7.4 total rebounds per game. On top of that, he also shot a putrid 29.8 percent from three-point range and was less than stellar from the charity stripe at 66.7 percent. Russell Westbrook also looked sloppy and careless with the ball too many times during clutch situations.

He, LeBron James, and Anthony Davis could never quite mesh well together last season. Despite another stellar statistical season from LeBron, the Los Angeles Lakers went on to miss the playoffs entirely. Having Westbrook, who is a ball-dominant guard, in the starting rotation along with two other superstars was not the recipe for success for this new “big three.” However, having Westbrook be an energizer off the bench and lead his own unit could be a solution for this new-look Los Angeles team.

The Lakers have wasted no time this offseason in shaking things up when it comes to their player personnel. Last season, they were simply too old as they were outmatched by the younger teams. It was reflected in their team’s fast-break stats. The team opted to not bring back the likes of Carmelo Anthony, Dwight Howard, and Rajon Rondo. As a result, the Lakers traded for Patrick Beverley who will give them some much-needed perimeter defense. As alluded to already, they also brought back Dennis Shroder on a one-year deal. A quick guard who can be a valuable shot-creator and facilitator in the right lineup. Whether this new-look roster will be an improvement remains to be seen, but having Westbrook come off the bench with this new roster could potentially re-capture some of that Oklahoma City Thunder spark he once possessed.

While the Lakers are younger now, they also have some inexperienced players on their squad. Not to mention, it remains to be seen whether Russell Westbrook and Patrick Beverley can co-exist given their past history. In a perfect world, the Lakers would relegate Westbrook to the second unit. This would allow him to embrace the Manu Ginobili role. This would allow the two-man game of LeBron and AD to thrive again and potentially get the Lakers back into the playoffs. Sadly, it is hard seeing Westbrook set aside his ego for this to happen in the near future. In reality, this will most likely cause more tension in the locker room and Los Angeles is still going to be faced with an uphill battle this coming year.