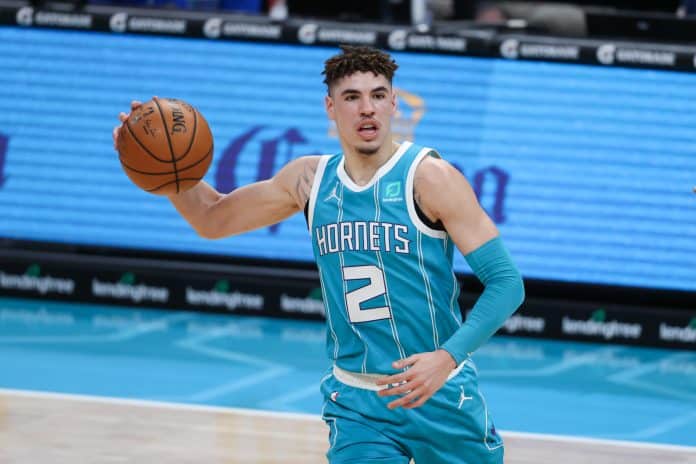 The Charlotte Hornets lost to the Indiana Pacers last night, 125-113. LaMelo Ball was in his third game back this season after missing the first 13 games. He lead the Hornets in scoring last night with 26 points and also had six assists and five three-pointers in the game. With 1:34 left in the game, he dove for a loose ball and stepped on a fans ankle courtside, reinjuring his left ankle.

This had to be a disaster scenario for the Hornets. Ball was only back for three games and got injured on a freak accident and he was grimacing when he limped off the court. It was his first home game back this season. NBA betting sites have the Hornets at (+30000) to win the Finals this season.

LaMelo Ball rolls his ankles after stepping on a fan’s foot.

Hornets head coach Steve Clifford did not have an immediate update after the game on Balls injury. This was the same ankle that caused him to miss the first 13 games of the season for Charlotte. His coach said “He was great tonight” in the press conference after the games. The Hornets have been riddled with injuries this season.

A few Hornets players spoke to the media after the game and gave their thought’s on the pileup of injuries the Hornets have had this season.

“It’s very tough but we have to be professionals about it,”… “It’s the game of basketball and those things happen. But people who are suited up and who are healthy enough to go out there, we have to go pick up that slack.” – Kelly Oubre Jr.

“We all know at some point everybody’s going to get back out there, and we can’t wait for it,”… “But right now the problem is we’re losing games, so we’ve got to figure it out and start getting some wins.” – P.J. Washington

The Hornets have a 4-12 record on the season and have been struggling to find wins.

Why Packers-Titans is 'absolutely' on Matt LaFleur | THE HERD