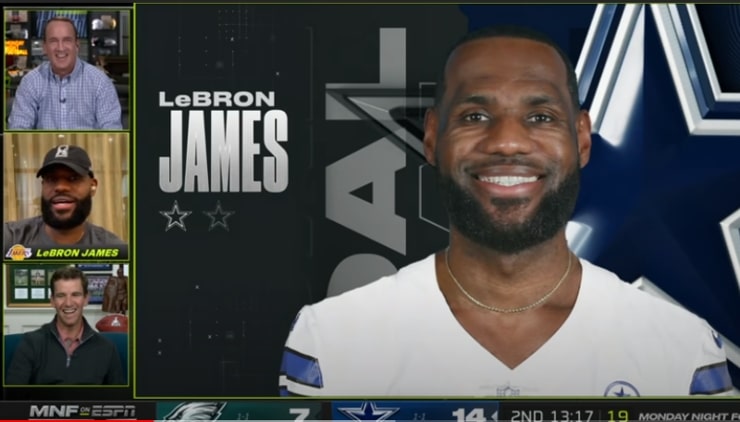 LeBron James was offered the chance to play in the NFL. During the Monday Night Football broadcast between the Cowboys and Eagles, the Los Angeles Lakers small forward joined the Manning Bros discussion. LeBron confirmed to the former NFL quarterbacks that Seattle Seahawks head coach Pete Carroll and Dallas Cowboys owner, president and general manager Jerry Jones offered him contracts during the 2011 NBA lockout season. The NFL also had a lockout the same year.

Furthermore, when former New York Giants quarterback Eli Manning asked if the rumors were true, the 17-time All-Star said, “That’s true, Jerry Jones offered me a contract. Also, Pete Carroll did as well, in Seattle during our lockout time.” The 6’8” NBA star could have played the wide receiver or tight end positions. However, at his height, who knows how long LeBron would have lasted. Tampa Bay Buccaneers tight end Rob Gronkowski is 6’6”. Gronk has had several injuries over the course of his playing career.

“I still got the jersey too, that Jerry [Jones] and Pete Carroll sent me from 2011.”

Imagine LeBron on the Cowboys or Seahawks 😳 @KingJames pic.twitter.com/boMLsl4Jes

When Eli asked the 36-year-old which position he thought about playing, LeBron mentioned, “Yeah, more tight end, tight end. I wanted to be a red-zone specialist like [Rob Gronkowski].” In high school, LeBron played football at St. Vincent-St. Mary.

Not to mention, he was receiving offers to play college football for Division 1 schools. In his junior year, he accumulated 1,160 receiving yards, 57 receptions and 16 touchdowns. “It definitely got my blood flowing again. Got my mind racing again thinking about the game of football, being out there on Sundays.”

The NFL lockout officially ended on Jul. 25, 2011. It first began on Mar. 12, 2011. In late July, the NFL and NFL Players Association agreed to terms on a new collective bargaining agreement. This led to coaches and owners sticking with the players they had already signed. Having said this, the 161-day NBA lockout began on Jul. 1, 2011 and ended Dec. 8, 2011.

“We were able to get a deal done in the NBA and I was back on the court in no time, but I definitely thought about it. I still got the jerseys that Jerry and Pete Carroll sent me from 2011.” He was playing for the Miami Heat at the time. This was one year after The Decision first aired on ESPN.

Two-time super bowl champion and 14-time Pro-Bowl quarterback Peyton Manning also added, “I would have thrown so many touchdowns to LeBron, put him out wide, throw the ball, throw the fade, jump ball…throw 75 touchdowns.” This is a typical tongue-in-cheek style of humor for Peyton.

Moreover, after winning four NBA championships, it is highly doubtful that the four-time NBA MVP is having any second thoughts about choosing basketball over football. At least LeBron James was offered the chance to play to the NFL. Whichever sport he chose to play professionally, he probably would have had an excellent career regardless.