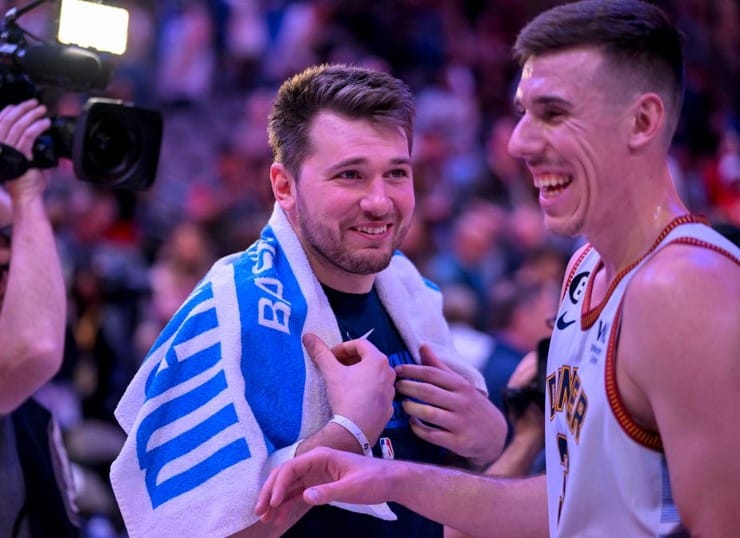 On Friday, Dallas Mavericks star Luka Doncic beat Los Angeles Lakers legend Magic Johnson to 50 career triple-doubles by a single game. Doncic set the mark in his 278th career game, one game less than Johnson. This is the second-fastest in league history.

Oscar Robinson (111) was the only NBA player who needed fewer games to amass 50 triple-doubles. In the Mavericks’ 127-99 win over the Denver Nuggets, Doncic finished with 33 points, 12 rebounds, and 11 assists.

According to some NBA betting sites, Luka Doncic is the No. 1 favorite to win MVP in 2023. A few sportsbooks are giving Milwaukee Bucks forward Giannis Antetokounmpo second-best odds.

Luka Doncic led all players on both teams tonight outright in points, rebounds, and assists for the 16th time in his career.

That’s tied for the 5th-most such games in NBA history, behind:

Furthermore, it was the 25th time the Slovenian superstar logged at least 30 points in a triple-double performance. Not to mention, it was the 16th time of Doncic’s career he led all players on both teams in points, rebounds, and assists.

“He’s already rewriting the record book,” said Mavericks coach Jason Kidd. “That’s pretty cool… Oscar is pretty special, so now to be right there behind Oscar being second fastest to 50 just shows you how special he is.”

Congrats to @luka7doncic of the @dallasmavs for becoming the 10th player in NBA History to record 50 career triple-doubles! pic.twitter.com/OiSjQTdoRA

As for Luka Doncic, he remains 10th on the all-time career triple-doubles list. In addition to trailing Westbrook, the Mavericks guard ranks below three other active players: LeBron James (105), Nikola Jokic (79), and James Harden (69).

Through 14 games this season, the 23-year-old has recorded four 30-point triple-doubles. The guard is averaging a league-high and career-best 34.3 points per game.

“It’s amazing,” Luka Doncic said after reaching the milestone. “Every time you ask me, I have the same answer. It’s a pleasure. I’m just really glad that I’m here and doing this.”

On Sunday, the Mavericks take on the Nuggets again at 7:30 p.m. ET. Both teams are entering the rematch with 9-6 records. This contest will air live on Bally Sports Southwest.