According to sources, the rare NBA card set the all-time record for a basketball card sold at a public auction. On the front, the card shows Doncic as a 23-year-old and his autographed signature.

For an added bonus, the back of the card features a joke the three-time All-Star told during his rookie season. He talked about retiring if he ever managed to dunk on LeBron James.

“This is the highest price ever realized for a basketball card sold in a verified public auction,” Jesse Craig, Vice President of Sales at PWCC Marketplace, told TMZ Sports.
“When this card went to the block, we purposefully avoided speculation on a price because this was an important moment for the market to decide on the value of Luka’s best trading card.”

On October 20, 2018, Doncic logged 26 points and 6.0 rebounds in the Mavericks’ 140–136 win over the Minnesota Timberwolves. The guard became the youngest player to score 20 points in franchise history.

In the Mavericks’ 99-93 win over the Charlotte Hornets on February 6, 2019, the guard became the youngest player in NBA history to post his third career triple-double. He finished with 19 points, 10 boards, and 11 assists. 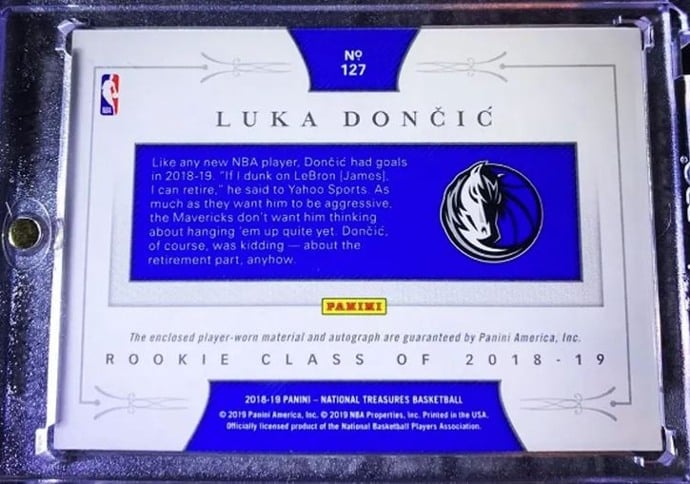 Additionally, Doncic ended his rookie season with eight triple-doubles, the most for an NBA player 20 years or younger. The 19-year-old Slovenian then won NBA Rookie of the Year and was selected to the NBA All-Rookie First Team.

While Doncic’s rookie card sold for $4.6 million in March 2021, it was a private sale. For a public auction, the Luka Doncic Rookie NBA Logoman Patch card was not projected to sell for over $2 million.

Furthermore, the all-time record for the sale of an NBA card was made by a private collector for $5.2 million. It was not an auction. Of course, it was for an Upper Deck Exquisite LeBron James card, per TMZ Sports.