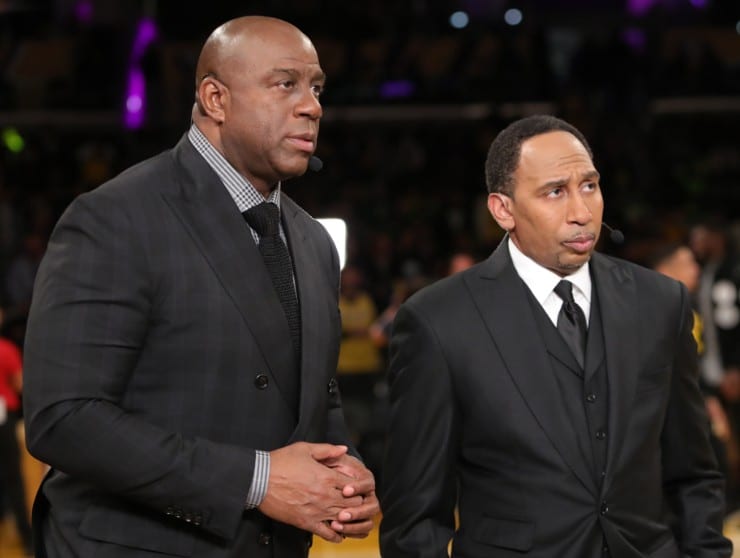 Last offseason, DeMar DeRozan was more than willing to return to Los Angeles and play for the Lakers. He was a free agent. However, LeBron James had a different plan. During an interview on ESPN’s Get Up!, Magic Johnson discussed the organization’s goal to sign the California native. Of course, after everything was said and done, Johnson feels James was at fault.

Johnson said, “When I think about it, the blame that he’s gotta take is the fact that DeRozan ended up in Chicago and not with the Lakers. DeRozan wanted to play for the Lakers, and when I got the call from his agent, I called the Lakers and said, ‘Hey, he wants to come home.’ And DeRozan could have been a Laker instead of a Bull.”

Moreover, Johnson made it crystal clear by saying, “LeBron has to take blame for DeMar DeRozan going to the Bulls instead of the Lakers.” Magic is not wrong here. Anthony Davis and LeBron James advocated for the Russell Westbrook trade. A lot of people within the organization are at fault for the Lakers’ disappointing season. Enough said.

Needless to say, due to the Westbrook trade, the DeRozan signing never manifested. The Lakers’ front office gave the players too much leeway and control. “We could make that deal, but when Russell and LeBron and them started talking, that’s when they nixed that deal and went with Westbrook, and he became a Laker instead of DeRozan.”

Additionally, instead of shopping Kentavious Caldwell-Pope, Montrezl Harrell and Kyle Kuzma to the Wizards, these players likely would have been traded to the Kings. In exchange, the Lakers would have received Buddy Hield. The main concern for such a blockbuster trade is obviously the salary cap. Los Angeles had barely any cap space.

On Aug. 11, 2021, as part of a sign-and-trade deal from the Spurs to the Bulls, DeRozan signed a 3-year, $82 million contract. His salary for this season is $26 million. Had the Lakers agreed to a sign-and-trade with the Spurs, they would not have been able to go over $143 million in expenditures. For example, Davis and James combined for $76.5 million this season.

Even with Alex Caruso taking a pay cut, they would have still struggled to re-sign him on top of trading for DeRozan. A Lakers’ team with Davis, DeRozan, and James sounds like a better “Big 3” than Westbrook, Davis and James. Maybe we could also call it a potential Big 4. Buddy Hield is averaging 15.5 points, 4.3 rebounds and 2.8 assists per game.

Offensively, there is no doubt that DeRozan is a better fit for the Lakers than Westbrook. Not only was DeRozan selected to his fifth career All-Star Game this season, he averaged 28 points, 5.3 rebounds and 5.0 assists per game in 73 games played. Though, was this plan realistic? Not really.