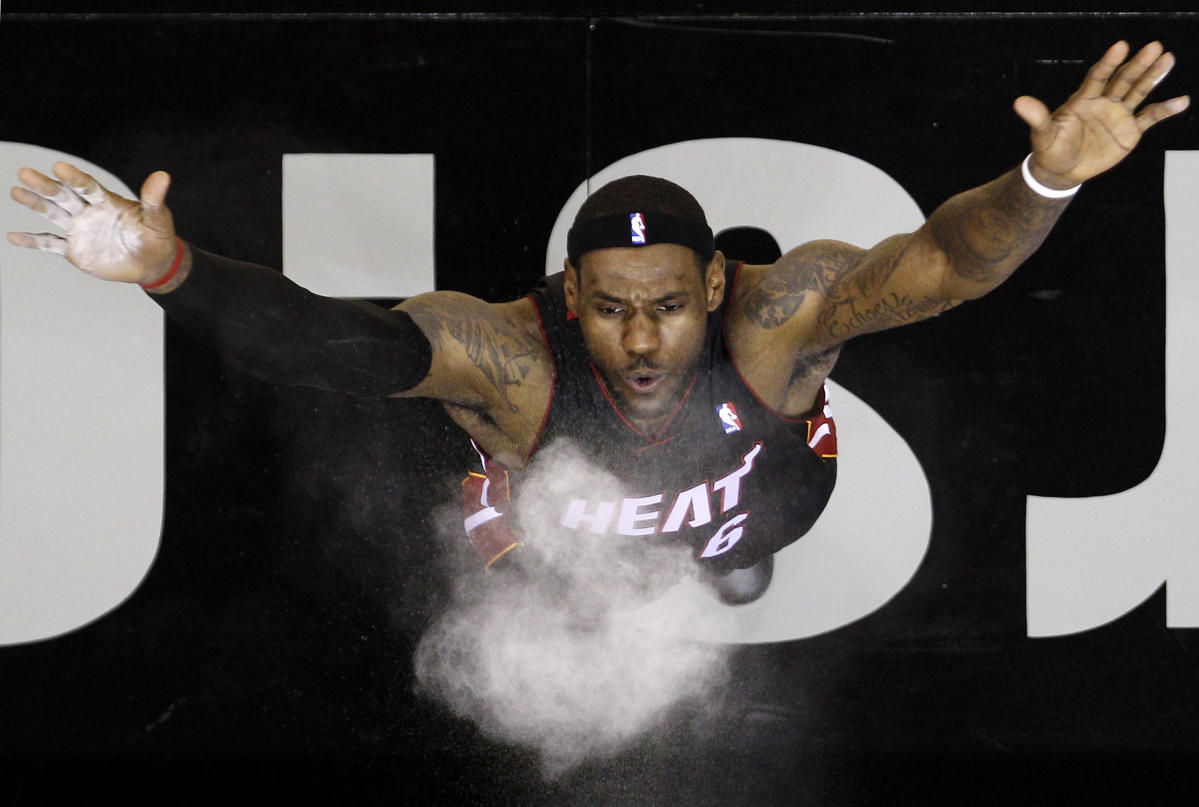 As Michael Jordan gave way to LeBron James, and as traditional forms of communication began to yield to the birth and growth of new media, the 2000s were all about making transitions – on the court and off – for the NBA and its fans.

The search for a superstar to succeed Jordan certainly was a central theme of that decade for the league, which is celebrating its 75th anniversary this season. So, too, were changes in how teams sought to add to their talent, whether by bringing aboard youngsters, looking abroad or piecing together a cohort of elite players.

Also of note was the fallout from ”The Malice at the Palace” in-game brawl, an event viewed by some at the time as reflective of a disconnect between players and spectators that then-Commissioner David Stern sought to remedy.

Dallas Mavericks owner Mark Cuban saw the league’s shifts of the 2000s ”driven by changes in technology and the business of the NBA,” he wrote in an email to The Associated Press.

”It was the advent of the internet. Satellite TV was still nascent and (regional sports networks) were really just happening. We were able to show our games globally,” Cuban wrote. ”When LeBron came into the league, he became must-watch TV. The combination of his brilliance and the expanded availability of our games really had a huge impact and helped the NBA grow globally.”

Consider the prism through which Cuban interprets much of this: He paid about $280 million to buy the Mavericks in 2000; the club is worth more than $2.5 billion now, according to Forbes.

That parallels the massive jump in NBA revenues under the stewardship of Stern and current Commissioner Adam Silver.

Much of that had to do with television contracts and the start of NBA TV, which made its debut in late 1999. The league managed to link itself to social media, a phenomenon launching during that decade: Facebook made its debut in 2004, YouTube in 2005, Twitter in 2006. Instagram came along in 2010, and the NBA boasted that it topped 65 million followers in March 2022.

The early 2000s, Cuban said, ”was also a time when almost every NBA team was losing money. A lot of money. And team values were declining,” so efforts were made ”to allow us to leverage the new platforms, create new revenue streams and try to make the game more engaging for fans. I give David Stern and Adam a lot of credit. They were open to moving games from broadcast TV to cable. They didn’t cut back on the number of games available on TV, as requested by a partner; they increased them. They pushed our games to every country in the world. That created the foundation for our business to grow.”

The list of key events for the NBA during the 2000s includes: Kobe Bryant and Shaquille O’Neal bridging the gap from Jordan to James with their Los Angeles Lakers‘ three-peat from 2000-02; Bryant scoring 81 points in a game, the second-highest total in league history; Phil Jackson passing Red Auberbach with his record 10th championship as a coach; Tim Duncan and coach Gregg Popovich leading the San Antonio Spurs to titles in 2003, 2005 and 2007; former NBA referee Tim Donaghy getting sentenced to prison for wire fraud and transmitting betting information; Mavericks forward Dirk Nowitzki, a German, becoming the first European-born player to win the MVP award.

Nothing grabbed as much attention, or was perceived to be as much of a threat to the success of the NBA, as the fight that spilled into the stands during a game on Nov. 19, 2004, between the Indiana Pacers and Detroit Pistons.

There were suspensions and legal cases involving Ron Artest, Stephen Jackson, Jermaine O’Neal, Ben Wallace and more – and the whole episode altered the way those getting paid to play and those paying to watch saw each other.

”It allowed people to take shots at a culture, take shots at a league,” O’Neal said during an appearance on Jackson’s ”All the Smoke” podcast last year, ”and still not be able to have a conversation – a real, educated conversation – about what actually really happened. … The `thug’ word was thrown out there probably 1,000 times. A thousands times. All of a sudden, it’s about the hip hop music we listen to. It’s about our cornrows. It’s about our tattoos.”

And, O’Neal pointed out, none of that sort of reaction or disdain accompanies the in-game fights that take place – and, indeed, are often glorified – during NHL or Major League Baseball games.

The NBA responded by changing security measures and, less than a year later, instituting a dress code in what some saw as an attempt to present a new image to corporate partners and to control players.

At the time, Philadelphia 76ers star guard Allen Iverson said: ”I don’t think that’s going to help the image of the league at all. … It kind of makes it fake. The whole thing is fake.”

The new rules required players to don business-casual attire and barred them from wearing visible chains when going to, or leaving, games.

”I wish we hadn’t done it. It took away some of the personality that makes the NBA special. But I understood why we did it,” he said. ”Our business was suffering, for a lot of different reasons. Mostly, we were not great at marketing at the time. We were throwing out anything trying to turn the tide.”

One serious concern for the league – and its broadcast partners – in the early 2000s was how things would go without Jordan, as significant and popular an athlete there ever was, in any sport.

He left the Chicago Bulls after a sixth championship in 1998, then came out of retirement for a second time in 2001 at age 38 and joined the Washington Wizards for two more seasons, both as a player and in the team’s front office. With a basketball in his hands, he was an older version of himself, hardly the Jordan of old, and soon enough the search for a new ”face of the league” was on.

Bryant seemed ready to assume that label as the decade began – he averaged 28.5 points for the Los Angeles Lakers in 2000-01 – and eventually did become a basketball icon despite a rape allegation by a 19-year-old employee of a Colorado hotel in 2003.

That was the same year that Jordan ended his playing career for good and, in a symbolic and significant handover, James entered the NBA as the top selection in a draft that also included Dwyane Wade and Carmelo Anthony.

Over time, as a standout in the 2000s, 2010s and beyond, James would become the subject of intense ”Greatest of All-Time” debates that boiled down to: LBJ or MJ?

”To deal with the pressures of being the savior of Cleveland, being the next guy to `be like Mike,’ and the way he has done it – with class, the way you would love anybody to represent the league,” two-time NBA All-Star forward Antawn Jamison, who played against Jordan and James, and also was a Cavs teammate of James, said about the younger player in an essay he contributed to the AP.

Evidence of the NBA’s expansion of its player pool in the 2000s: James was not the first high schooler picked No. 1 overall. Kwame Brown got that honor in 2001, drafted by Jordan’s Wizards. In 2002, the Houston Rockets made China’s Yao Ming the first non-American who didn’t play college basketball in the U.S. to get taken No. 1, symbolic of the league’s desire to become more of a worldwide entity.

Another harbinger of what was to come: Kevin Garnett, Paul Pierce and Ray Allen led the Boston Celtics to a championship in 2008, a precursor to the ”Super Team” phenomenon that James, his eventual teammate Wade and others perpetuated in the following decade.

”The Road to History,” James wrote on Twitter at the time, ”starts now!”

Analysis: NBA scoring race could end up as one for the ages