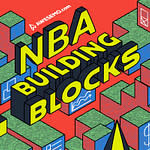 Sunday, April 3, brings an eight-game main slate tipping off at 6 p.m. ET on DraftKings and FanDuel. Yahoo is starting an hour later at 7 p.m. ET with a six-game main slate. Let’s look at the player pool and discuss the top NBA DFS picks today for DraftKings, FanDuel and Yahoo lineups. As always, you can head over to the Awesemo NBA DFS & Fantasy Basketball home page for all the fantasy basketball content you need for any given slate.

Tonight is a back-to-back for Golden State who will be making a quick trip to Sacramento to take on the Kings as 6-point road favorites. After taking out the Jazz 111-107 last night, there is a strong likelihood that Draymond Green, Klay Thompson, Andre Iguodala and Otto Porter Jr. get the night off. That would make Jordan Poole an even more appealing option at his reasonable $33 salary on Yahoo tonight. Over the last eight games without Stephen Curry, Poole is averaging 36.9 minutes with a whopping 21.3 field goal attempts. This has culminated in 28.5 points, 5.1 rebounds, 5.8 assists, 0.5 steals and 0.1 blocks. It is hard to envision Poole with less than 40 fantasy points tonight and depending on how much he plays, 50 or more could be in the cards.

On Friday, Dejounte Murray was a late scratch with a non-COVID related illness. Hopefully he is feeling better and can join in the fun of playing against a G-League Portland squad. San Antonio took care of business in this same matchup 48 hours ago dispatching the Trail Blazers 130-111 in a laugher. The Spurs are now one game ahead of the Lakers for the final spot in the Play-In Tournament. Over his last 15 games Murray is averaging 36.2 minutes, 25.7 points, 8.7 rebounds, 8.9 assists, 1.9 steals and 0.4 blocks. Tonight he should easily cruise to 40 fantasy points with upside to 50 if the game is even remotely competitive.

There is some risk that this game could easily be decided by halftime as the most recent 10-day contracts signed by Drew Eubanks and Kris Dunn on March 24 have hit their expiration. Depending on what the Blazers decide to do, they could end up with only eight active players tonight and that would mean Brandon Williams and Ben McLemore are their “best” guys. Keep an eye on the news today as the Trail Blazers could end up with half a dozen guys projecting for 36 to 36 minutes of court time.

The Rockets have plenty of players, but they are still going to be a tremendous source of point per dollar options tonight. Rookie Alperen Sengun has been out for the last five days with a lower leg issue, but if he is starting tonight look to him as one of the best center options on the slate and someone who can flirt with 40 fantasy points in 26 to 28 minutes.

Kevin Porter Jr. and Jalen Green have seen a tremendous increase in their opportunities with Houston having thrown in the towel. In his last three games, Porter is averaging 37.2 minutes and 21.0 field goal attempts with a 49.2% conversion rate. This has resulted in 27.7 points, 8.3 rebounds, 10.0 assists, 1.7 steals and 0.7 blocks. Green has picked up his production as his rookie campaign winds down. In this same stretch he has had numbers similar to Porter with 38.9 minutes, 24.3 field goal attempts, 31.7 points, 4.7 rebounds, 2.3 assists with 0.6 combined blocks and steals. Garrison Mathews, Josh Christopher and KJ Martin Jr. are all discount dandies. Jae’Sean Tate is content to be a “glue guy” and is not looking for his shot which makes hi a very risky option. If Sengun is out, Usman Garuba is worth a dart throw on the main slate.

Look to Green in this matchup against the Timberwolves in the NBA player prop market. Currently, he has a 3.5 over/under on his 3-point prop, and the Awesemo NBA player projections have him for 3.9 made 3-pointers, which gives him a 74% probability of surpassing the over. Green is averaging 5.8 made 3-pointers over his last five games on 12.8 attempts.

Minnesota is two games behind Denver for the sixth-seed, so there is a path to moving out of the Play-In Tournament. The Timberwolves are 13 point road favorites tonight so it is entirely possible that they decide to rest some of their key players are they gear up for their stretch run. Karl-Anthony Towns, Anthony Edwards and D’Angelo Russell are the trio to target in tournaments. Naz Reid would be interesting if Towns is out, though he is also a candidate to see extra minutes in mop-up duty if this game goes as predicted tonight.

The Thunder are an absolute embarrassment right now as they are 14 point underdogs at home to a Phoenix team that is going to be resting Devin Booker, Deandre Ayton and Jae Crowder. Aleksej Pokusevski (illness) miss the last games, but if he is starting tonight he should see his standard 28 to 32 minutes. Jaylen Hoard literally came out of nowhere on Friday drawing a spot start and rolling up 45 fantasy points on the strength of 20 rebounds. Hoard joined the team Friday afternoon on a 10-day contract and likely will see at least 32 minutes again Sunday. Isaiah Roby and Theo Maledon are also core options while Aaron Wiggins, Lindy Waters III and Vit Krejci are viable for the seven o’clock slate.

The Suns already secured the best record in the league so it seems odd that they would be letting Chris Paul play in this matchup. Even if he starts, it is hard to see him playing more than a couple quarters which makes targeting his under on points scored a savvy strategy. Should he start, he likely will rack up a dozen assists even in limited time and strengthen his hold on winning that statistical category for the fifth time in his storied career. The Masses will be flocking to JaVale McGee tonight and while he can rack fantasy production in a hurry, in 14 starts this year he has averaged just under 21 minutes with 25.9 fantasy points.

Cameron Payne, Cameron Johnson, Bismack Biyombo, Torrey Craig and Landry Shamet look like the preferred fantasy options for savvy games. If Paul is ruled out, Aaron Holiday or Elfrid Payton would likely move into the starting lineup or at the very least be on the court anytime Payne is on the bench.

Tonight there are two late games that could end up with late news as the Los Angeles Clippers have been inconsistent with their minutes as they work in Paul George and they are all but secure with only needing to win one play-in game to advance to the first round of the playoffs. The ‘Dubs may be resting more players than they are letting on, but there will still be four teams in the player pool providing pivots if there is unexpected news from coach Steve Kerr.