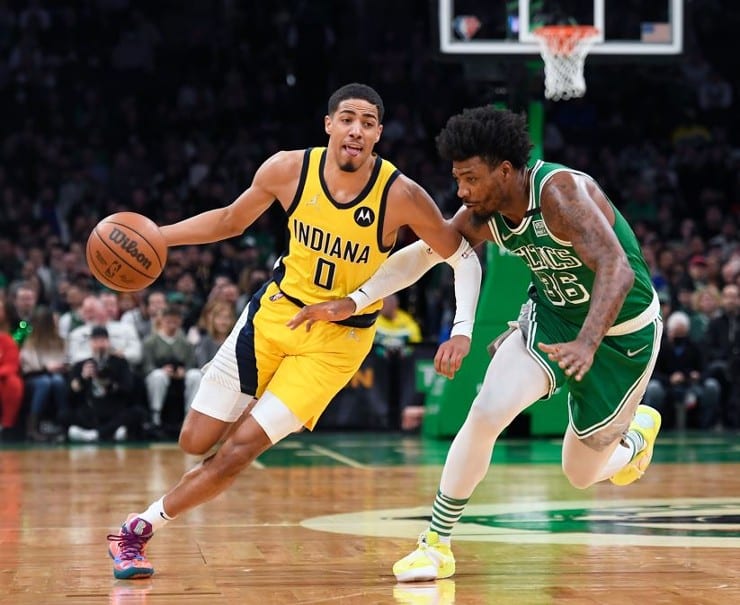 Indiana Pacers general manager Chad Buchanan has full confidence in Tyrese Haliburton, and he believes his guard could become as great as five-time All-Star and Hall of Famer Reggie Miller.

In an interview with Alex Kennedy of Basketball News, the Pacers G.M. reassured doubters that Haliburton is the real deal. “We’re gonna build our team around him,” Buchanan said. That point is clear to the Indiana faithful.

Haliburton was selected 12th overall by the Sacramento Kings in the 2020 NBA Draft. In 58 games played and 20 starts during his rookie 2020-21 season, the guard averaged 13 points, 3 rebounds, 5.3 assists and 1.3 steals per game. He was then selected to the NBA All-Rookie First Team.

Pacers G.M. on Tyrese Haliburton: “We see him as hopefully being the next Reggie Miller”

Last season, in the guard’s final 51 games played with the Kings, Haliburton averaged 14.3 points, 3.9 rebounds, 7.4 assists and 1.7 steals per game. After playing 109 games with the Kings, his time with Sacramento came to an end.

On February 8, 2022, Haliburton, Buddy Hield and Tristan Thompson were traded to the Pacers for Justin Holiday, Jeremy Lamb, Domantas Sabonis and a 2023 second-round draft pick.

Of course, Thompson and Lamb are now free agents. Not to mention, Holiday, Maurice Harkless and a 2024 first-round draft pick were traded to the Atlanta Hawks for Kevin Huerter.

Although the second-year guard played just 26 games with the Pacers last season, his impact was evident. Haliburton recorded career-high numbers. He averaged 17.5 points, 4.3 rebounds, 9.6 assists and 1.8 steals per game. Plus, he shot a career-high 50.2% from the field.

Furthermore, the Iowa State product will miss playing for the Kings. However, trades are part of the business. He’s just blessed to have the opportunity to play in the NBA. That’s the bottom line. And a lot of fans would agree with his comment.

The second-year guard was surprised the Kings traded him

“As a kid, I would’ve fu—ing killed for this, so it’s fun to be a part of,” Haliburton told Kennedy. “And at the end of the day, it’s just basketball. And the things in life that come with it, I’m just gonna be who I am and share my values on certain things… I just take it naturally and have fun with it. It’s a great opportunity for me.”

Leading up to the trade, the guard thought he’d retire with Sacramento. Maybe playing with the Pacers could be a positive turning point in his playing career. In the 2021-22 season, the Kings finished 30-52 (.366) and 12th overall in the Western Conference.

The Kings’ playoff drought was extended to 16 seasons, the longest in NBA history. After a 6-11 start, the front office fired head coach Luke Walton. Then, Alvin Gentry served as the interim head coach. At the end of the season, the team fired Gentry as well.

“They kept bringing up trade rumors and I wouldn’t even bat an eye because I’m like, ‘There’s no way that they actually would trade me.’ I wasn’t worried. And I think that [trade] just made me look at having more self-awareness and realizing I’m not bigger than the ultimate picture.”

Under head coach Rick Carlisle, the Pacers are in good hands. While the Pacers ended last season with a 25-57 (.305) record, this season will be a better indicator on whether the team can compete with the Celtics, Heat, 76ers and Bucks in the Eastern Conference.

More news stories on Tyrese Haliburton and the Pacers are on the main page.