Philadelphia 76ers have reportedly decided to stick with wantaway point guard Ben Simmons and now expect him to play ball in Philly for the 2021/22 season.

According to reports, the Sixers haven’t received a good enough trade offer to tempt them into parting with their star Australian point guard and, with the upcoming NBA season now just a month away, are no longer willing to do business.

Simmons, a former No.1 overall pick at the 2016 NBA Draft, is thought to have told the Sixers he no longer wanted to wear the shirt earlier during the offseason. The Aussie was rumored to prefer the west coast sunshine of California to the East coast chill of Philadelphia, with the one of the L.A. Lakers, L.A. Clippers, or Golden State Warriors his preferred trade destination.

But the Sixers do not wish to accept a deal involving future draft picks. Head coach Doc Rivers and majority owner Michael Rubio and co. clearly feel that trading Simmons out for rookie potential could lead to a halt in team development and an immediate drop-off in performance.

The reports are that 76ers have tried to do business on this deal and that there was a list of 5-10 adequate, top-tier replacements that the organization would have been willing to discuss as part of a trade. But nothing came of those names, and the Sixers aren’t willing to budge. Without a viable All-Star coming to Philadelphia to replace Simmons, it looks like the Aussie is set for another winter of gloves and scarves.

Perhaps the story doesn’t end there though: rumor has it that Simmons is willing to force through a move by sitting out on the 76ers’ preseason training camp. Such a move would be contested fiercely by the Sixers organization, however, with reports indicating that was the Australian to skip out on either his pre- or regular-season duties, a fine of approx $308k per day could be heading his way.

An NBA source has commented on the stand-off, stating:

‘Eventually he’s going to show up. Sixers will go from there’. They apparently plan to fine Simmons if he doesn’t attend 2021-22 camp, preseason and so on. Don’t want to trade for draft picks and try to convert to players. Can’t get any of 5-10 NBA guys they like.”

Sportsbook BetOnline had previously been taking bets on Simmons’ next destination. But, after checking today, our betting experts report that the game line is down.

The previous odds had been as stated in the below tweet from BetOnline.ag: 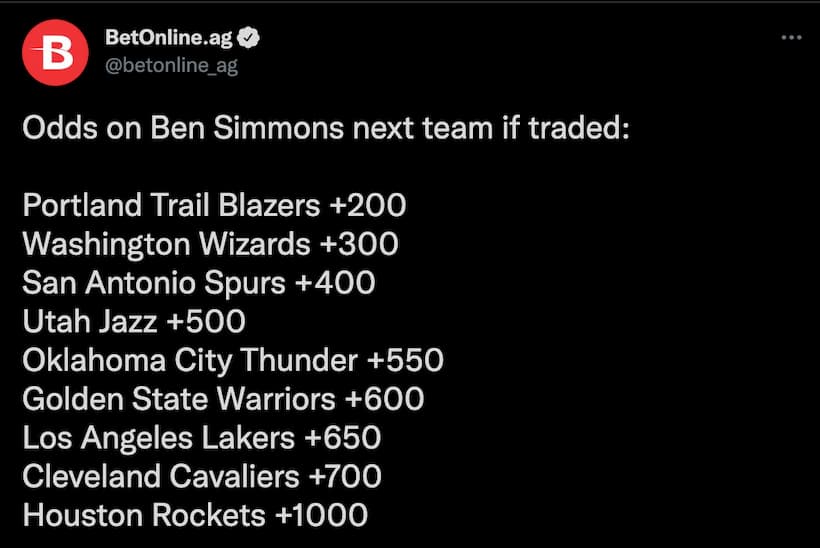 It’s unclear as to when or whether or not this betting line will reappear. But, as always, Basketball Insiders will be sure to keep you updated with all the latest NBA betting news.

In the meantime, it’s still possible to sign up using this BetOnline promo code to get up to a $1,000 deposit match. The sportsbook features deep NBA betting markets and updates daily, so we may not have seen the last of the Simmons trade lines just yet!

Marc Gasol an option for Warriors?