The 2021-22 NBA season begins on Oct. 19, 2021, so it’s now time for NBA PrizePicks. Leading into the next basketball season, all eyes are on Denver Nuggets center Nikola Jokić, who was last season’s MVP winner. With PrizePicks, there are two different games available. Fantasy Score is for betting on whether or not a specific player will go over or under their projected fantasy points.

Single Stat is the other game. This contest is for guessing the points, assists, rebounds or made threes for the best players. Now, which players are the best picks for the upcoming season? Are there any All-Star performers from last season that might take a step back in 2022? These questions will be answered in this article. 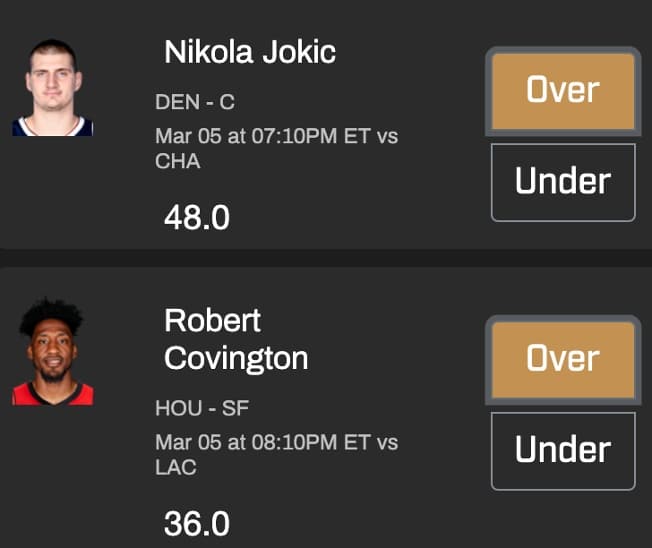 Center Nikola Jokić had outstanding performances throughout the 2020-21 season on the Nuggets. Last season, the three-time All-Star averaged 26.4 points, 10.8 rebounds and 8.3 assists in 72 games played. He also shot 56.6% from the field and 38.8% from three-point range. His career-high 26.4 points-per-game average last season helped lift him above all other centers in the league.

Jokić ranked fifth in total rebounds (780), third in points (1,898) and third in assists (599). Furthermore, Jamal Murray’s absence to start the season is another contributing factor to think about. Statistically, the 26-year-old has so much to offer bettors. Needless to say, the Joker is worth the risk.

Two-time MVP Giannis Antetokounmpo from the Milwaukee Bucks has to be on anyone’s list. In 61 games played last season, the Greek Freak averaged 28.1 points, 11.0 rebounds and 5.9 assists. Not to mention, he shot 56.9% from the floor and 30.3% from beyond the arc. The eight-year veteran accumulated 1,717 points, ranking sixth overall in the NBA.

Antetokounmpo also finished his season with 671 total rebounds, ranking 11th in this metric. He ranked third in the league for player efficiency rating (29.2). According to Basketball-Reference, the five-time All-Star has a 67.9% chance of making the hall of fame.

Point guard Stephen Curry from the Golden State Warriors is another solid choice. He is the projected favorite to lead the league in three-pointers in 2022. Betting the over for his points projection makes sense. In the 2020-21 season, the seven-time All-Star averaged 32 points, 5.5 rebounds and 5.8 assists in 63 games played. Shooting-wise, the Ohio native shot 48.2% from the field and 42.1% from three-point range.

Considering Klay Thompson is not expected to play his first game of the season until Christmas, the 12-year veteran will have more opportunities to score points and dominate the stat sheet.  His 32 points per game average was a career-high last season as well. With 337 made threes last season, he also led the NBA in this metric — explaining why he is usually the favorite for successful three-point shots.

Dallas Mavericks guard Luka Doncic is the favorite to win MVP in 2022, according to various sportsbooks. It would be wise for any gambler to include the two-time All-Star on his or her list. Last season, the 22-year-old averaged 27.7 points, 8.0 rebounds and 8.6 assists in 66 games. He also had a field goal percentage of 47.9% and a three-point percentage of 35%.

Doncic ranked fifth overall in total points scored (1,830) and fifth in total assists (567). It makes sense why the third-year player is the frontrunner for multiple awards and All-League selections next season. To add to this aforementioned data, he will now play ball under new Mavericks head coach Jason Kidd. What’s not to like? He could very well win the MVP next season if he can avoid sustaining a major injury, knock on wood.

Minnesota Timberwolves center Karl-Anthony Towns is one of those players who may fly under the radar next season. More of the focus will be on Los Angeles Lakers guard Russell Westbrook or Portland Trail Blazers guard Damian Lillard.

Make no mistake, Damian Lillard and Russell Westbrook are both serviceable guards for fantasy basketball. That is a huge understatement. They are viable options. However, questions remain for Anthony Davis and Kawhi Leonard. Davis suffered a groin injury in Game 4 of the first-round playoff series against the Phoenix Suns. Davis also tweaked his ankle back in May.

The 28-year-old can still play at a high level, but he is now more susceptible to missing games due to injuries. The eight-time All-Star is not in decline per se — he will have help from Westbrook and LeBron James. Nevertheless, some bettors might not be willing to take a risk. For Davis, gamblers should bet the under.

Then, there’s Kawhi Leonard from the Los Angeles Clippers to think about. He suffered a right partially torn ACL during the playoffs and had to miss out on playing in the Clippers’ first Western Conference Finals appearance. The power forward is expected to miss a huge portion of next season. On Aug. 12, the Clippers re-signed Leonard to a four-year, $176.3 million contract. So, unless betting the under in the 2021-22 season, it may be more suitable for bettors to pick the California native next year instead.

Unfortunately, PrizePicks is not available to bettors in AZ, CO, CT, DE, HI, ID, IN, IA, LA, MD, ME, MS, MD, MT, NV, NH, NJ, OH, PA, TN, VA and WA. Most PrizePicks bettors reside in California, Texas or Florida. In general, players must be at least 18-years-old. However, some states may require gamblers to be at least 21-years-old. The Basketball Insiders PrizePicks bonus provides a 100% deposit bonus up to $100.

To claim a promo code, bettors must first go to the home page. It can be accessed from this link. Then, the bettor should click on “start playing now” at the top right-hand corner. Next, the gambler must enter his or her name, address, email address and password. After that, enter the code SAFE at the bottom of the page in the promo box. Lastly, make your first deposit to claim in upwards of $100.