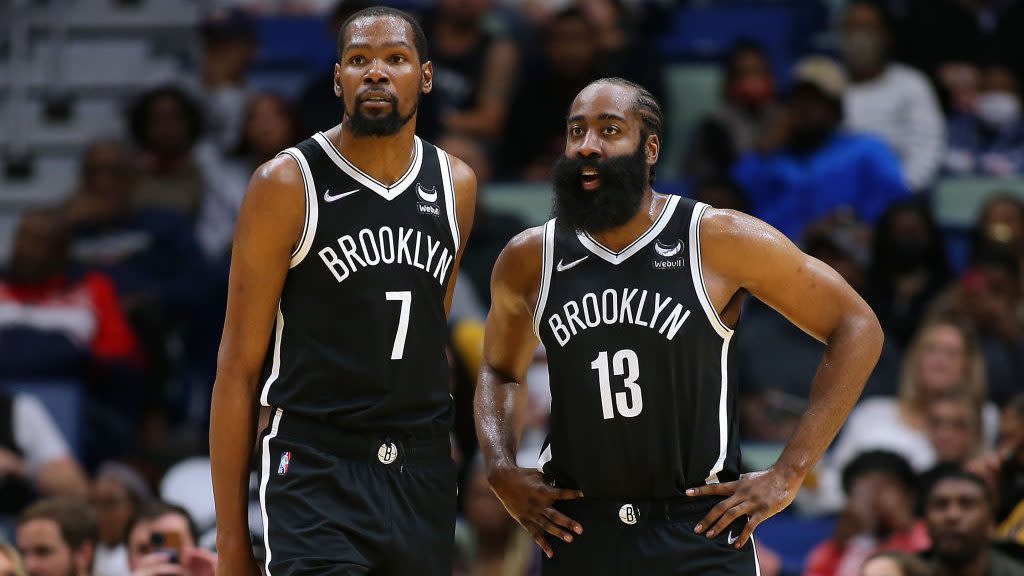 Kevin Durant had every reason to believe Kyrie Irving and James Harden were in it for the long haul and ready to chase a ring when he signed a four-year, $198 million contract extension to stay with the Brooklyn Nets.

The Nets had put a max extension in front of Harden — three years, $161.1 million — and Durant believed Harden would sign it because Harden told KD he would, reports Logan Murdock at The Ringer.

Durant’s relationship with Harden began to blossom again. They went on a trip to Greece this past summer, and the guard twice reassured Durant that he’d sign an extension to stay in Brooklyn long term, according to league sources.

Read the entire story at the Ringer. It’s a fantastic insight into Durant and where he is as a person and player.

The Nets put a max extension in front of Irving, too (his max was $187 million over four years), but pulled it off the table when Irving’s refusal to get vaccinated had him missing home games and the Nets asked him just to stay away from the team. Through all of that, Irving was frustrated but never asked for a trade, and according to Murdock’s reported Irving and Durant grew closer as friends this season.

Irving now says he has no plans to leave Durant and the Nets.

Not so much with Harden, although maybe at the time he and Durant talked last summer Harden believed he was staying long term. That changed. Harden reportedly was frustrated with the Nets in general, Irving’s part-time status, and the scoring load he had to take on because Durant missed time due to an injury. As Harden became disillusioned — again — his play suffered and the buzz about a trade grew. Eventually, Harden got his wish.

The Nets now have Irving playing full time but still have yet to see Ben Simmons on the court due to back issues. Without Simmons’ defense and playmaking in transition, it’s a long, difficult road from the play-in games to come out of the East. It’s hard to see Brooklyn emerging from the East.

None of that is what Durant envisioned when he signed that extension back in August.

Check out the latest on the Nets

Stott? Bohm? Phillies’ third base competition goes right down to the wire