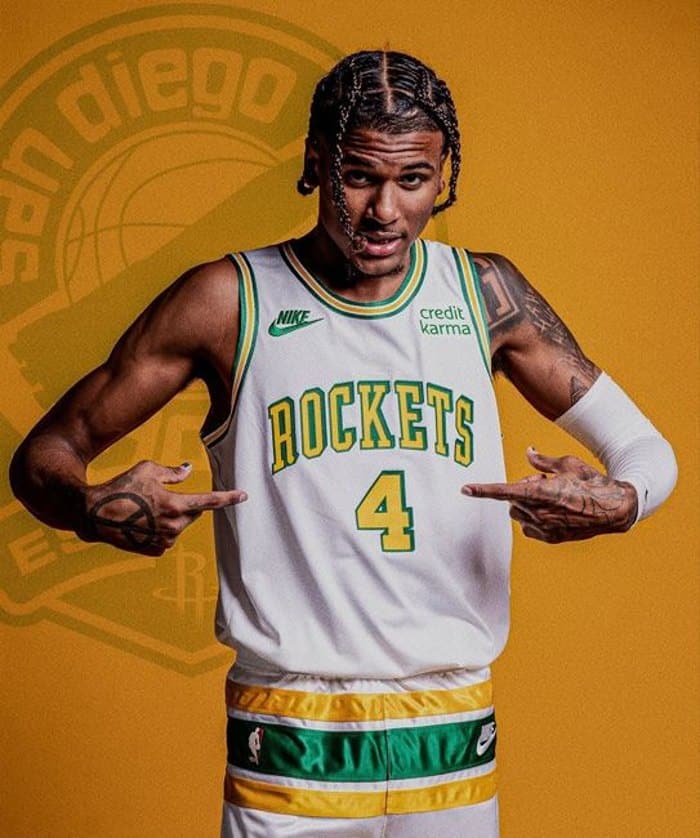 On Wednesday, the Houston Rockets unveiled their new Hardwood Classic uniforms for the 2022-23 season. These green-and-gold uniforms will be worn to honor the team’s inaugural 1967-68 season in San Diego.

The Rockets played San Diego until 1971. Hall of Famers Elvin Hayes and Calvin Murphy wore the green-and-gold uniforms when they played.

Of course, the top half of the uniforms might remind some fans of the Seattle SuperSonics’ jerseys from long ago. Though, the green and white colors are the only similarity.

Our Hardwood Classic uniforms represent the beginning of a journey to greatness.

Speaking of Hayes, the Rockets will also retire his No. 44 jersey on Nov. 18 against the Indiana Pacers. The Big E wore the No. 11 jersey with Houston as well. However, the team already retired Yao Ming’s No. 11 jersey.

Through 1,303 career games, Hayes averaged 21 points, 12.5 rebounds, 1.8 assists, 1 steal and 2 blocks per game. With the San Diego Rockets, the center won an NBA scoring title as a rookie, averaging 28.4 points per game.

The moment Elvin Hayes heard from @TilmanJFertitta that his jersey will hang in the rafters of the Toyota Center. pic.twitter.com/5B2kfXjLHQ

Greatness in every thread. pic.twitter.com/H9tpzrqwgP

Since space travel and aeronautics are linked to San Diego and Houston, the Rockets wanted to pay homage to both American cities for the 2022-23 season.

On the team’s main website, narrator Tobe Nwigwe mentioned in the Rockets uniform reveal video: “Space exploration teaches us to boldly move forward, a common thread between both cities. As we move forward to the next generation of Rockets basketball, we bring back a classic to reflect where we came from.”

At the top of the NBA game-worn jerseys, Credit Karma and Nike will be featured on them.

More news stories related to the Rockets are on the main page.