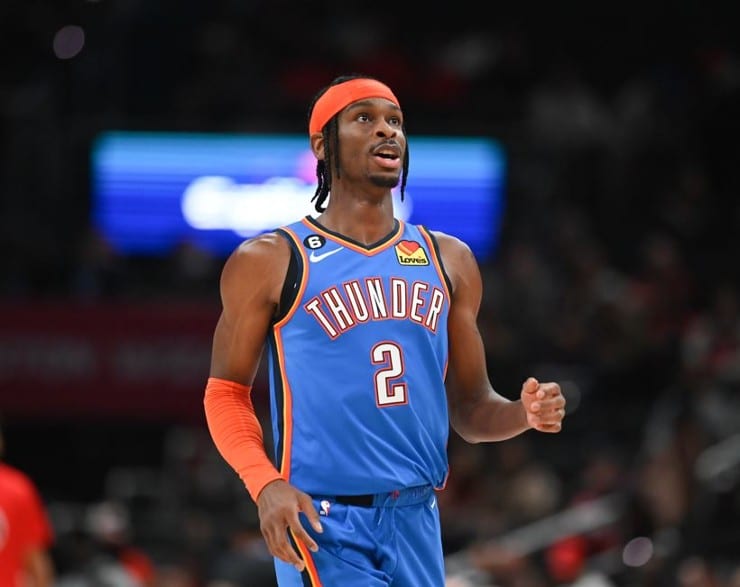 Through 13 starts, the fifth-year player is having an MVP-caliber season. The guard is averaging a career-high 31.5 points per game, along with 4.4 rebounds, 5.8 assists, 2.1 steals, and 1.5 blocks.

Per a few NBA betting sites, Shai Gilgeous-Alexander now has the 14th-best odds to win MVP in 2023. Though, the guard is the betting favorite to win NBA Most Improved Player.

Shai Gilgeous-Alexander is also shooting 53.9% from the field and 37.8% from 3-point range. His usage percentage ranks as the sixth-best in the league (32.6%).

Dallas Mavericks guard Luka Doncic is the only player with more unassisted points at the rim. Plus, Gilgeous-Alexander is logging 24 drives per game, his second-most since the 2020-21 season (25.2).

On Wednesday night, Washington Wizards guard Bradley Beal drained a potential game-winning shot against the Thunder in the closing seconds of the fourth quarter. Washington led 120-118 with 6.1 seconds left.

But then Thunder coach Mark Daigneault called a timeout.

“We just wanted to make sure we got [Shai Gilgeous-Alexander] the ball,” Daigneault said after the game.

After the timeout, the Kentucky product was given one last opportunity to give Oklahoma City the win. The guard then sank a game-winning step-back 3-pointer, leaving just 1.1 seconds left on the clock.

The Thunder’s Shai Gilgeous-Alexander had 37 Sunday at MSG to move into 5th. pic.twitter.com/zIBPLWiKoR

Oklahoma City’s 121-120 win over the Wizards was the team’s seventh win of the season.

It was the guard’s ninth 30-point effort this season. The Thunder’s 108-94 road loss to the Milwaukee Bucks on Nov. 5 was Gilgeous-Alexander’s only game with less than 20 points this season.

He has not yet recorded any double-doubles or triple-doubles, but the guard is an offensive juggernaut. Without SGA, the Thunder would probably have less than three wins right now.

'You just can't do that': McDavid hit upsets Oilers

Injury spate continues for Blue Jackets: 'Bubble wrap is what we need'