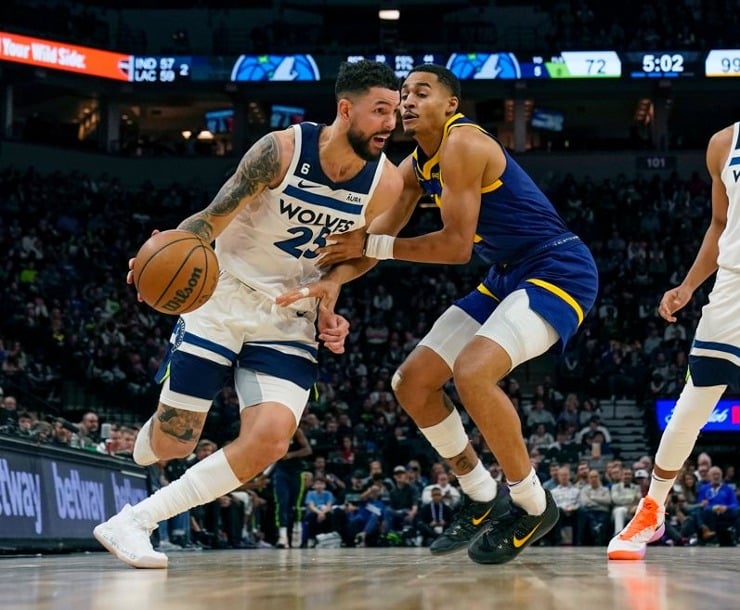 Following the Minnesota Timberwolves’ 137-114 loss at home to the Golden State Warriors on Sunday, Austin Rivers was asked why his team continues to struggle against playoff contenders.

According to some NBA betting sites, the Timberwolves have the 17th-best odds to win the championship in 2023. A few oddsmakers are showing better odds for the New Orleans Pelicans and Dallas Mavericks.

“If we’re going to continue to play that way, we’ve got to find ways to get better at it,” continued the Timberwolves guard. “It’s early, but at the same time, it’s not. It’s getting to the point where a lot of games are coming by now, so we’ll just continue getting better.”

In Minnesota’s loss to the Warriors, the Timberwolves were outrebounded 47-31. Rudy Gobert led his new team in rebounds with 10 boards. Not to mention, Golden State outscored them 50-44 in the paint.

While the Wolves went on a 19-4 run in the fourth quarter, it was not enough to hang with the Warriors.

Of course, Rivers replaced Jaden McDaniels in the starting lineup on Sunday, making his first start with Minnesota. McDaniels was downgraded to out due to an illness. It was his first game missed of the season.

In 29 minutes of action against the Warriors, Rivers ended his performance with five points, two rebounds, and one assist. He shot 2-of-7 overall. Through 10 appearances this season, the 11-year veteran is averaging 2.4 points, 0.9 boards, and 0.5 assists per game.

With Karl-Anthony Towns and Rudy Gobert, fans expected Minnesota to have one of the best defenses in the league this season, especially in the key. But the stats prove otherwise.

Despite having two of the best big-man defenders in the league, the Timberwolves are allowing 114.7 points per game, which ranks 22nd in the NBA.

The funny thing is, the Timberwolves probably didn’t even need a massive roster overhaul to improve as a team.

Last year’s playoff woes seemed like a symptom of youth/inexperience. If they would’ve just ran it back, I feel like they’d be in a better spot than they are now.

For one positive note, the team’s steal-plus-block per game average is 13.6, which ranks fifth in the league.

Timberwolves G.M. Tim Connelly surrendered the team’s future for the three-time Defensive Player of the Year. Now, 20 games into the 2022-23 season, Minnesota is 10-10 and ranks 10th overall in the Western Conference.

The Wolves have now lost back-to-back games after winning five straight. On Monday night at 7 p.m. ET, they play the Washington Wizards at Capital One Arena. Sportsbooks show Washington as a 1.5-point favorite. Per ESPN’s Basketball Power Index, the Wizards have a 54.8% chance of beating Minnesota.