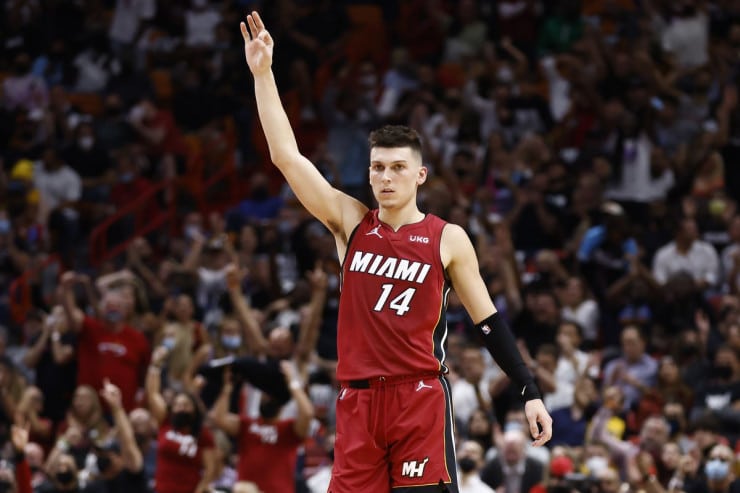 Heading into the season, all of the talk surrounding the Miami Heat was about their three star players. Bam Adebayo is among the favorites for the breakout player of the year. Jimmy Butler remains one of the best two-way players in the league. The acquisition of Kyle Lowry with his championship experience is supposed to put this team over the top.

This writer predicted that the Heat would win the East this season. That would be quite the accomplishment, considering the incredible depth of the conference this year. Miami heads into tonight’s game against the Mavericks with a 5-1 record, with their only blemish being an overtime loss to the Pacers.

Wins against the Grizzlies, Hornets, Nets, and defending champion Bucks were no fluke. Miami’s suffocating defense only gives up 97 points per game, which ranks 2nd in the league. They are 3rd in scoring, which makes for a great combination. The Heat defense deservedly gets the credit, and their new additions are a major part of that.

Adding Lowry, PJ Tucker, and Markieff Morris alongside Butler and Adebayo is a nightmare for any offense, but there is another side to the equation that needs to be brought to light. As good as Miami’s defense is, they still need to be able to score. Enter Tyler Herro, who is having a sensational bounce-back season.

After bursting onto the scene in his rookie year, Herro went through a bit of a Sophomore slump. The former Kentucky guard was written off at the end of last season, and he has used that as motivation coming into the 2021-22 campaign. His individual defense has gotten much better with his improved lateral quickness and defensive anticipation. He has also added muscle to his frame and has been rebounding extremely well for his position.

Erik Spoelstra on Tyler Herro: He’s able to handle pressure a lot better. He’s really trained for it this summer. I think the added strength has helped him. This is also the evolution of really good players in this league. pic.twitter.com/sxXwW60jLJ

So far so good for Herro, who aims to continue his solid play tonight in Dallas. Through the first six games, Herro is averaging 20 points, 6.7 rebounds, and 4.5 assists per game. All of those are career-highs, as are his shooting percentages (46 percent overall, 40 percent from downtown, and 85 percent from the free-throw line) on the floor.

This strong start is especially good when you consider that Herro is playing a new role this season, coming off the bench. With so many additions to the team, the opportunity has opened up for him to lead the second unit. Duncan Robinson fits better with the starters, as he is more of a spot-up shooter. Herro has more offensive tools that he can utilize to score in a variety of ways.

In the overtime game in Indiana, Herro became the first player in Heat history to score 30 points and grab 10 rebounds off the bench. He has the same green light as Jordan Clarkson and Lou Williams but he is playing more under control and distributing when needed.

After leading the team in scoring in their first two games, Herro remains the team’s second-leading scorer behind Butler. Things will get tougher in the next couple of weeks when they face the Celtics, Jazz, Nuggets, Lakers, Clippers, and Jazz again. Most of those games are on the road, which will present a hostile atmosphere. Herro relishes those moments and seems to feed off of them a la Reggie Miller playing in Madison Square Garden.

As the season progresses and Miami keeps winning, the target on their back will only grow larger. Every team is going to get up to play the Heat, and they are well aware of that. The key for them is to remain even-keeled and to stick to their game plan. Teams will want to try to take away their best player in Butler, and their man in the middle. Miami currently leads the league in rebounding and Herro (6.7 per game) is right behind Adebayo (14.0) and Butler (7.0) in that category.

Herro has made a point of emphasis this season to hit the glass more and to use his improved strength to box out in the paint. His vision and decision-making appear to have taken strides as well. Herro ranks third in assists for Miami, just behind Lowry and Butler.

Despite coming off the bench, Herro is getting starter’s minutes. Only Butler and Adebayo have played more, which is a clear indication that Erik Spoelstra trusts Herro on the floor. Miami has only played in one close game so far this season, but those situations are where Herro can thrive. There was another Heat shooting guard that always seemed to perform well in the clutch. It would be blasphemy to compare him to Dwyane Wade but he has a similar type of knack for rising in those crucial moments.

This version of Herro is something that Pat Riley envisioned when Miami selected him in the lottery of the 2019 draft. Now with a full offseason to recover, improve, and grow, he is clearly ready to take the next step. What really stands out about his game this year is his efficiency. His 57.0 true shooting percentage and ability to score at all three levels have really vaulted this Heat team into the top tier of the league.

Most points off bench, first six games of a Heat season:

There may be an extra letter in his last name, but Herro has shown that he is fully capable of carrying the offensive load for the second unit. With Victor Oladipo still recovering from surgery and Max Strus on the mend, Miami’s depth at the position is very thin. The 21-year old has answered the bell, and done so emphatically.

The Heat shocked a lot of people in 2020 when they made it all the way to the NBA Finals. If they find their way back this year, that should not be such a surprise. This team is significantly better than the one that lost in six games to the Lakers.

a Goal from St. Louis Blues vs. Calgary Flames