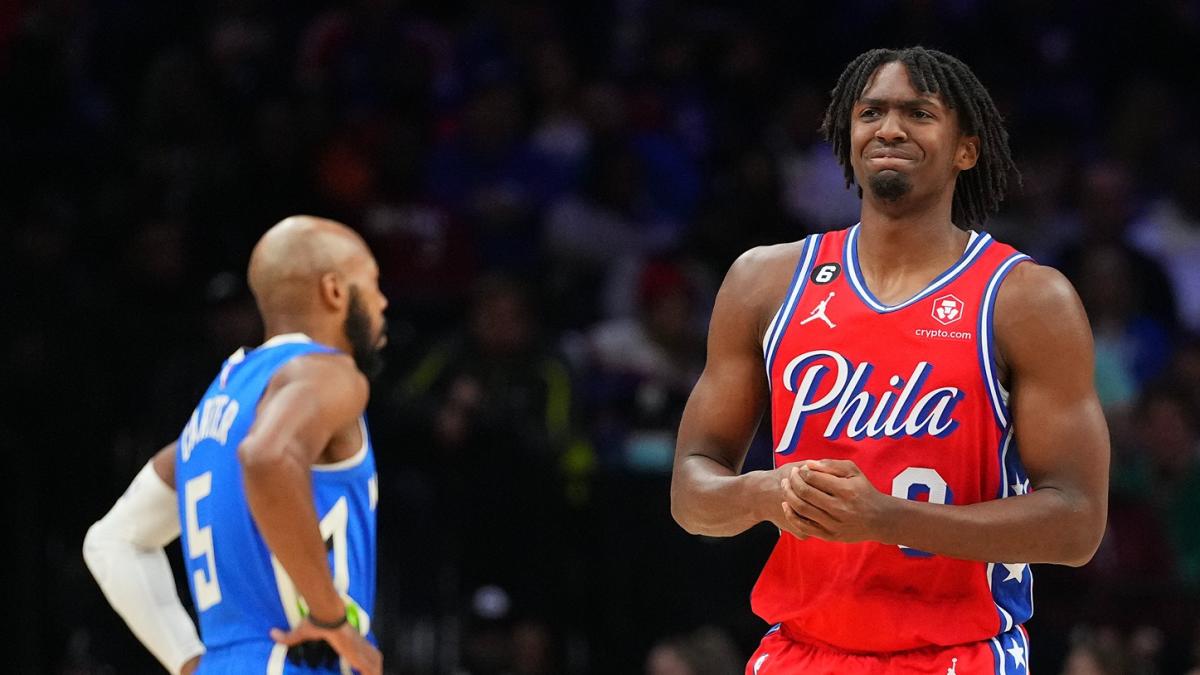 The Sixers will have to keep making things work without their starting backcourt.

Tyrese Maxey suffered a small fracture in his left foot Friday night during the team’s win over the Bucks, a Sixers official said Saturday. He’ll be re-evaluated in approximately two weeks.

James Harden has been sidelined since suffering a right foot tendon strain on Nov. 2. He said Thursday that he’s “on pace” with his rehab, which was expected to take about a month.

Maxey’s play had been uneven in Harden’s absence, but he played a fantastic first half on Friday, scoring 24 points on 9-for-12 shooting before a drive that left him grimacing in pain late in the second quarter. Through 15 games in his third NBA season, the 22-year-old has averaged 22.9 points, 4.4 assists and 3.5 rebounds. A 44-point game last month in Toronto was more entertaining evidence that he’s an electric scorer and that his vast improvement as a three-point shooter last season wasn’t fluky.

While Maxey is persistently positive, this injury unfortunately halts his development with nuances of the game like drawing fouls, finding the right moments to attack, varying his pace, and reading defenses. For now, he’ll likely be analyzing all of that from the sidelines with Harden and assistant coach Sam Cassell.

Without both Maxey and Harden, the Sixers look set to play plenty of De’Anthony Melton and Shake Milton. That duo played well in the second half of the Sixers’ comeback victory against Milwaukee. In a small, early-season sample, the Sixers have outscored opponents by 18.7 points per 100 possessions outside of garbage time in Melton-Milton lineups, per Cleaning the Glass.

“It’s been great,” Milton said Friday after scoring a season-high 15 points. “We bounce ideas off each other all the time. And it’s easy if we have a matchup that one of us doesn’t like; the other one can bring up the ball and we can keep the pace of the game going, the flow of the game going.

“And defensively, we don’t really care; we just pick up whoever. So it’s fun to play with a guard like that who’s talented offensively and defensively, as well. He’s always in the paint grabbing rebounds, too, so that helps our team tremendously.”

Maxey’s injury also means Joel Embiid‘s presence is now even a bit more important. On top of his 133 points over the last three games, the reigning Eastern Conference Player of the Week has posted 22 assists.

He’s prepared to be featured in the middle of the floor with the Sixers’ “Delay” actions.

“Just help them,” Embiid said Friday night. “Like tonight, Milwaukee opted to go with a lot of ball pressure. You don’t have to fight it. Just get off the ball. We can run anything with me at the top of the key, whether it’s Delay or some of the plays that we run. Just try to make their job easier where they don’t have to be fighting against somebody pressuring them all the time. And then just trying to empower them so they understand, when we run plays, I want them to be aggressive.

“Tonight, I thought there were a few turnovers where we had miscommunication with me and De’Anthony. Me passing the ball back, he’s just not used to it. I told him, ‘When you come off a screen, I want you to shoot it every single time. If you feel like you’ve got a good shot, just let it fly. We’ll go from there. And if you don’t have it, just pass it to me and we’ll go to the second actions.’”

After Saturday night’s matchup with the Timberwolves, the Sixers should have a day to rest followed by an important day of practice. Next up will be a back-to-back set against the Nets and Hornets.

Adam Ruzicka with a Goal vs. Florida Panthers