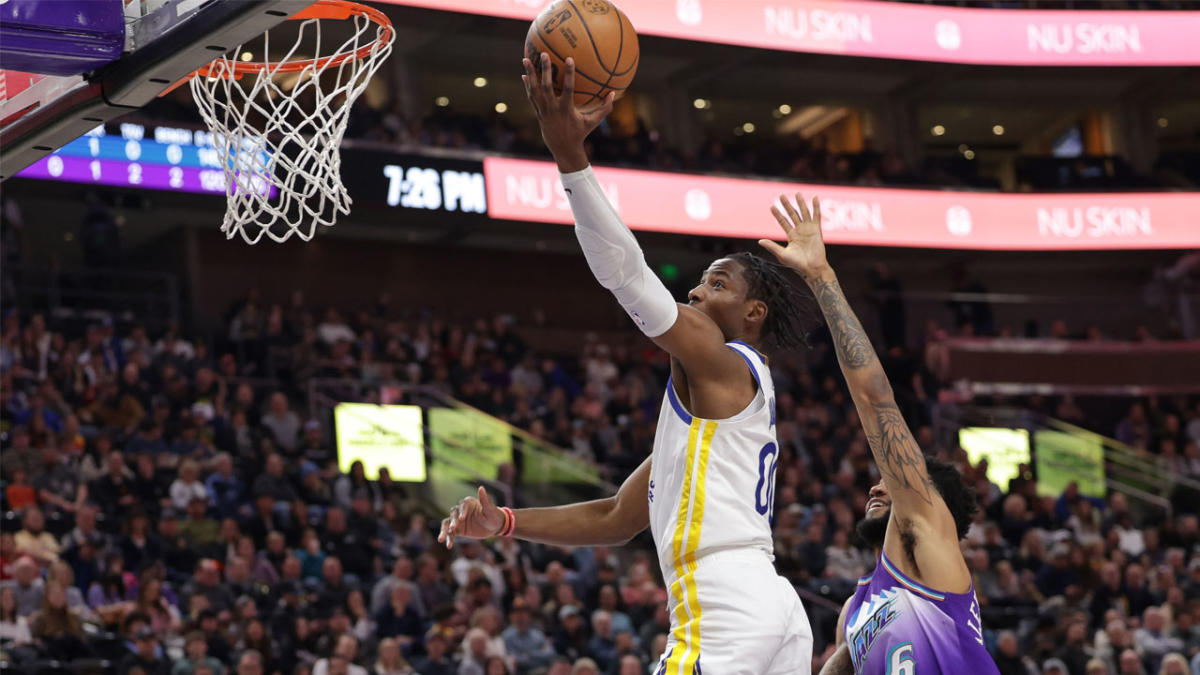 In the rubble of a loss that was short-term devastating and long-term educating Wednesday night, the Warriors can summon a trace of a smile while tending to their wounds.

Jonathan Kuminga was terrific, again, and his performance was the most encouraging aspect of a 124-123 loss to the Utah Jazz in Salt Lake City.

The Warriors were without three All-Star caliber starters – Stephen Curry, Draymond Green and Andrew Wiggins – and trailed by nine points after three quarters. The agony comes from making a sizzling comeback and taking a four-point lead in the final seconds before making enough mistakes to invite defeat.

It was largely because of Kuminga that Golden State nearly won a game that. by any reasonable measure, it should have lost.

“JK was tremendous tonight – fantastic,” coach Steve Kerr told reporters at Vivint Arena. “He continued his recent play as far as defense and running the floor and really being solid. But he added the scoring, getting to the rim, posting up a couple times.”

Kuminga scored a season-high 24 points, on 10-of-13 shooting from the field, including 1-of-3 beyond the arc. The 20-year-old forward also gave the Warriors five rebounds and four assists. He was plus-8 over 30 minutes off the bench.

It was Kuminga’s work in the fourth quarter that really sent a ray of light toward the team’s future. He never looked more like the future star the Warriors visualized 17 months ago, when they made him the No. 7 overall pick in the 2021 NBA draft.

As the Warriors were wiping away a nine-point deficit and taking a four-point lead with 13.3 seconds remaining, Kuminga scored 12 points on 5-of-6 shooting while also coming up with three assists, one steal and inside the final minute a crucial block on Jordan Clarkson, who responded with a flagrant-2 foul that resulted in his ejection and two free throws for Kuminga.

Klay Thompson, who along with Kevon Looney, represented the only starters active for the game, took note of the most complete performance of Kuminga’s brief career.

“His defense was incredible on Clarkson on that one possession at the end, and his ability to finish around the rim,” Thompson said. “JK is a special talent, and he showcased that tonight.

“He’s young in his career, but when he keeps things simple it’s impressive to watch. He’s going to add layers to his game as each season goes by. Just an incredible talent.”

The Warriors entered this season hoping their three youngsters – James Wiseman, Moses Moody and Kuminga – would be able to contribute to their attempt to win back-to-back championships. Kuminga is the first to establish himself as a deserving member of the rotation.

This performance, producing in the furnace of the fourth quarter a tight game at a tough road venue, illustrates why.

Kuminga’s rise has been gradual and fairly consistent. He is shedding some of the bad habits that limited his minutes, dramatically curbing his forays into isolation and substantially reducing a tendency for fouling.

Kuminga is averaging 9.1 points, 4.0 rebounds and 21.7 minutes in the nine games since he has become a fixture in the rotation. He’s shooting 53.2 percent from the field. Most important, he has blended into a second unit that is vastly improved.

On a night when the Warriors felt a sharp twinge of misery, it shouldn’t linger. It won’t if they turn toward Kuminga.

“Tough one to digest,” Thompson said. “But we’ll learn from it. We’ll be better.”

Kuminga’s recent play is one of primary the reasons that adds credibility to such a statement.

After signing Jose Quintana, Mets must do what it takes to sign Kodai Senga -- or get bold elsewhere