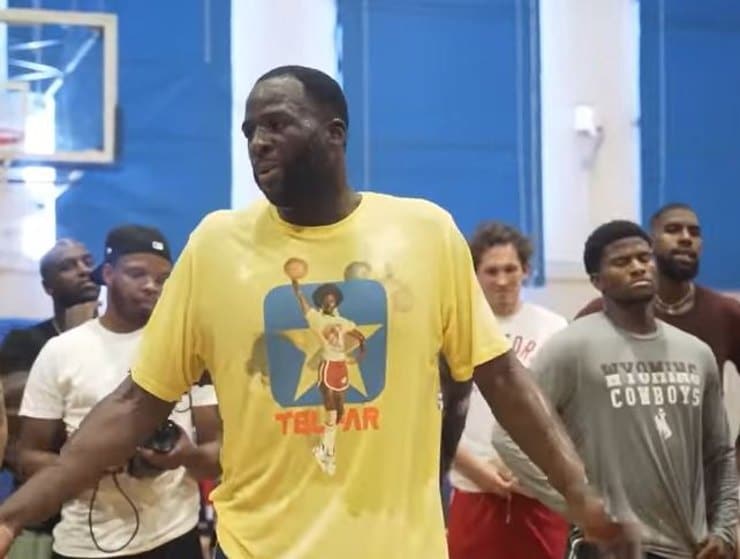 “A lot of competition out here, and I appreciate you guys for making this s—t real basketball,” explained Green. “You know, so many times we get out here in the summer, and we want to do a bunch of s—t we’re not going to do.”

“I’m not going to come out here and do what I’m not going to do. It’s no point. So, you can talk and be like ‘yeah.’ That’s never going to force me to get outside of myself. You know what I’m saying?”

“I started talking to you,” Green continued. “You started getting the ball, you want to take jump shots and never crash the offensive order here. You’re not gonna make it shooting your jump shots.”

“You’re gonna make it by hustling and getting offensive rebounds. Getting stops. You know what I’m saying? Gabe, I just beat you in all these sprints. That’s bulls—t!”

“And it’s my first time on court, up and down. That’s bulls—t! You’re trying to make a team. How you gonna make it?”

“If Pascal Siakam is outrunning you, if Fred VanVleet is outrunning you, you will never fuc—ng make it. You know what I’m saying? So, we can talk IQ s—t all we want. But at the end of the day, moth—fu—er got to play a role in the NBA.”

“It’s two months on a team that can do s—t they want to do, and 13 other moth—fu—ers have to play a role. They can do what they wanna do.”

“Everybody else gotta role, so you’re either gonna master your role or you’re gonna get the f—k out, and it’s just that simple. And running hard, two minutes sprint? Really? My moth—fu—ing job? That’s bulls—t! You don’t work hard.”

Green fought tooth and nail to make it to the NBA

“We can talk IQ, we can talk all of this s—t! But at the end of the day, the moth—fu—er who wanted it more is going to get it. Because I promise you i’ma wanted more. Ain’t nobody going to want it more than me.”

“I may not be the best ball handler, shooter. But ain’t nobody gonna want it more than me. And that’s a skill. That’s a skill that anyone can possess. Anyone can have that. It’s all about if you want it, so I’m gonna stop talking.”

This was one heck of a speech. To watch more videos related to Draymond Green and the Warriors, go to the main page.