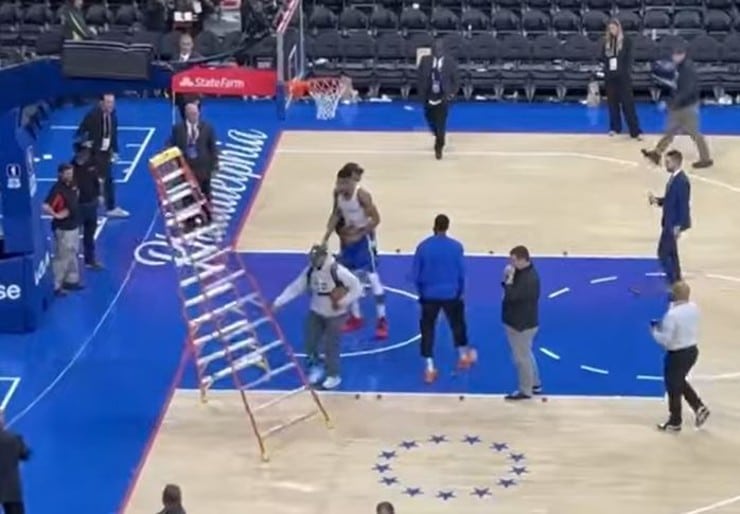 It appears the two-time MVP wanted to practice his free throws after the game, but the arena workers were just trying to do their jobs. Though, what happened beforehand irked the Bucks forward the most.

According to a few NBA betting sites, the Bucks have the second-best odds to win the championship in 2023. Check out which sportsbooks are giving the Boston Celtics better odds to win the Eastern Conference. Watch the video below.

“I’ve never tried to disrespect anyone in any way, shape or form,” Giannis Antetokounmpo said an hour after the Bucks suffered their third loss of the season. “I feel like today is just an unfortunate event that took place.

After the loss, Antetokounmpo returned to the court to practice his free throw shooting. Part of his routine is sinking 10 straight shots. But after making seven consecutive free throws, 76ers center Montrezl Harrell approached him and took the ball away.

Harrell wanted to practice his own shooting ahead of Saturday night’s matchup against the Minnesota Timberwolves. Then, the Bucks forward returned to the locker room to retrieve two more balls.

When the six-time All-Star returned to the court, the arena workers had a ladder positioned below the basket. Harrell tweeted his side of the story after the incident.

“I respect every player,” Antetokounmpo said. “I know some players don’t play now, they want to get some extra work, want to work on their skills and stuff, and I said, obviously we can shoot together. They said, they told me no, this is their court, I should leave.

I was like, I have three more free throws, I was at seven, I want to try to make 10 in a row. I shot my eighth one. Came and took the ball away from me and I was very surprised. I feel like it’s very unprofessional. I would never take the ball away from a professional athlete when he’s trying to do his job.”

Aye make sure you get the complete story I ask the man can he get off the court so I can workout they had to change the court over he ignore me so hey that’s what you get! Respect is respect! GOODNIGHT!

On knocking over the ladder, Antetokounmpo explained what happened. “I went back out there to shoot and there was a ladder in front of me,” the Bucks forward said.

The Bucks star believes he did nothing wrong

However, Antetokounmpo shot a season-low 4-of-15 (26.7%) from the foul line. This explains why the Milwaukee star wanted to practice his free throws after the game.

“I don’t know if I should apologize because I don’t feel like I did anything wrong, except the ladder just fell,” continued the Bucks forward.

“I feel like it’s my right for me to work on my skills after a horrible night at the free throw line. And I think anybody in my position that had a night like me would go out and work on his free throws…

At the end of the day, I think everybody knows my character.” While the 2021 NBA champ overreacted, this was the first time Giannis Antetokounmpo let his emotions get the best of him nearby arena workers.

He just wanted to practice. Either way, arena workers never deserve this treatment. To watch other videos related to the Greek Freak, go to the main page.

Zach LaVine on benching: ‘You play a guy like me down the stretch’