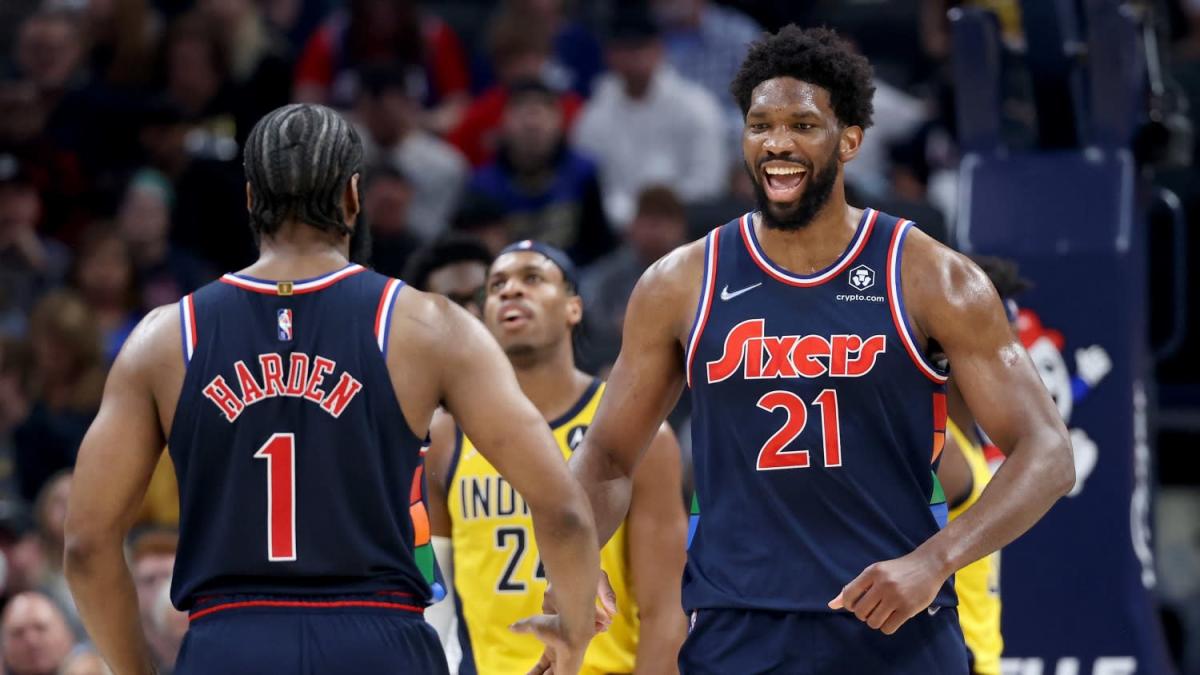 Will Embiid win scoring title? A look at his chances of beating LeBron, Giannis originally appeared on NBC Sports Philadelphia

There’s a strong chance the Sixers will enter the playoffs with four of the last five scoring title winners on their roster.

With a 45-point performance Tuesday night in the Sixers’ victory over the Pacers, Joel Embiid raised his season scoring average to a league-best 30.4. James Harden led the NBA in points per game from the 2017-18 through 2019-20 seasons.

Though Harden’s offensive greatness with the Rockets isn’t very pertinent now, Embiid’s prodigious scoring this year is undoubtedly notable. So, what are his chances to end on top?

It’s an impossible question to answer with much precision because of differing approaches to playoff seeding and stars’ minutes. Giannis Antetokounmpo sits at 29.9 points per game after he played only 24 minutes (and posted 18 points) Tuesday in a win against the Bulls. The two-time MVP picked up his fifth foul with 10 minutes left, then watched the rest of the game from the bench as Milwaukee polished off a 21-point win.

The Bucks on Thursday will host the Celtics, and they’ll conclude their season with road games against the Pistons on Friday and Cavs on Sunday.

Playoff seeding remains at stake for both the Sixers and Bucks, although Milwaukee knows as well as any team that seeding isn’t everything. After 60 victories in 2018-19 and 56 in 2019-20, the Bucks won their first NBA championship in 50 years as the Eastern Conference’s No. 3 seed.

That’s where they sit as of Wednesday afternoon. The Celtics, Bucks and Sixers are all 49-30. Basketball Reference has Boston with the best chance of finishing No. 2 (43.8 percent), followed by the Bucks (28.4 percent) and Sixers (26.3 percent). The Sixers would lose tiebreakers to Boston (worse in-division record) and Milwaukee (dropped season series).

LeBron James’ 30.3 points per game are closest to Embiid. The 37-year-old sat out the Lakers’ last two outings because of a left ankle sprain and saw his team eliminated from playoff contention with a loss Tuesday in Phoenix.

For a few reasons, we imagine Sixers fans won’t be thrilled if James overtakes Embiid. The NBA stipulates a player must appear in at least 70 percent of his team’s games to be eligible as a league leader. James would need to play in two of the Lakers’ final three contests to check that box.

Falling short of the 58-game minimum wouldn’t technically eliminate James, though. A player still qualifies if his point total would’ve led the league over the minimum number of games. For instance, if a modern-era Wilt Chamberlain averaged 45 points but only played 56 games, he’d bring home the scoring title.

James’ chances at the scoring title are obviously best if he appears in two or three more games and does well … but here’s an unlikely hypothetical that would spark controversy if it came to be:

If anything, the above should highlight that James will almost certainly not win through a “loophole.”

Embiid’s odds of becoming the first center to earn a scoring title since Shaquille O’Neal in the 1999-2000 season are clearly good. He’d join Chamberlain and Allen Iverson as the only players to ever lead the NBA in points per game as Sixers.

Asked about the possibility in February, he acknowledged it would be a big deal.

“It would be a huge accomplishment, especially as a — well, I’m not really a big man, but I’m still 7-2 and 500 pounds, so I guess you can say that I’m a big man,” Embiid joked. “But it would be a huge accomplishment. I’m just looking forward to going out there for the remaining 26, 27 games, and just go out there and keep doing whatever I’ve been doing — just dominating.”