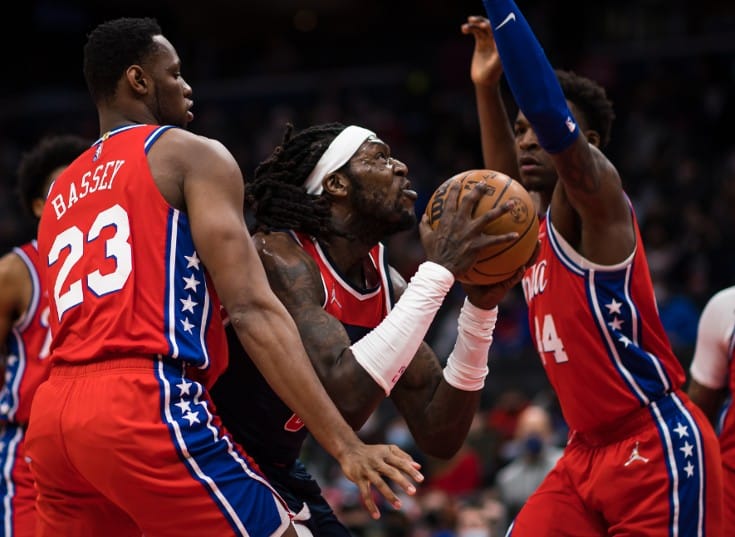 In Wednesday night’s intraconference rematch, the Washington Wizards (23-27, 19-30-1 ATS) are facing off versus the Philadelphia 76ers (31-19, 26-24 ATS); NBA picks are posted here. Will the Sixers extend their winning streak to six games? In addition to the starting lineups, our top NBA picks and betting trends are available below.

All Wizards vs 76ers betting odds can be found at BetOnline

Moreover, on Tuesday, in the Wizards’ 112-98 road loss versus the Bucks, forward Kyle Kuzma earned another double-double, accumulating 25 points, 11 rebounds and 2.0 assists in 35 minutes of action. Montrezl Harrell also ended his performance with 20 points and 5.0 rebounds in 26 minutes played. Washington has won only three of its past 10 contests. Along with a six-game losing streak, the Wizards are 10-15 away, 13-12 at home and 7-17-1 ATS on the road.

Meanwhile, in the 76ers’ 122-119 overtime win at home against the Grizzlies on Monday, guard Tyrese Maxey led his team in scoring with 33 points in 42 minutes on the court. Forward Tobias Harris contributed 31 points, 5.0 rebounds and 5.0 assists in 40 minutes played, too. Philadelphia has won eight of its previous 10 games. On top of their five-game winning streak, the 76ers are now 14-10 at home, 17-9 away and 10-14 ATS at home this season.

According to ESPN’s Basketball Power Index, the 76ers have a 77.3% probability of winning.

Next, it can be helpful for bettors to analyze other head-to-head contests. In the past three meetings, the 76ers are 2-1 against the Wizards. On Jan. 17, 2022, the second time these teams met during this regular season, Washington won 117-98 at Capital One Arena. That win ended their six-game skid versus Philadelphia. On Dec. 26, 2021, the Sixers defeated them 117-96 on the road.

On another topic, despite losing to the Bucks on Tuesday, Wizards’ forward Kyle Kuzma does see potential in his team. After the game, he told reporters, “I really liked playing with Deni and Rui.” Bradley Beal cannot play due to a wrist injury, so Kuzma and his fellow teammates will have to elevate their performances if they want to win.

Kyle Kuzma on a positive from tonight’s game: “I really liked playing with Deni and Rui.” Said he thinks they have potential as a defensive trio, with size and the ability to switch.

Leading into this Eastern Conference rematch, the 76ers are heavy 10.5-point favorites at home. Was the January loss a fluke? Tonight’s game will tell bettors everything they need to know. All things considered, think about picking the 76ers to win, they will cover the spread and the total will go over 213.5. If you require a quick refresher on the basics of sports betting, read our handicap betting guide. Other NBA Picks are on the main page.