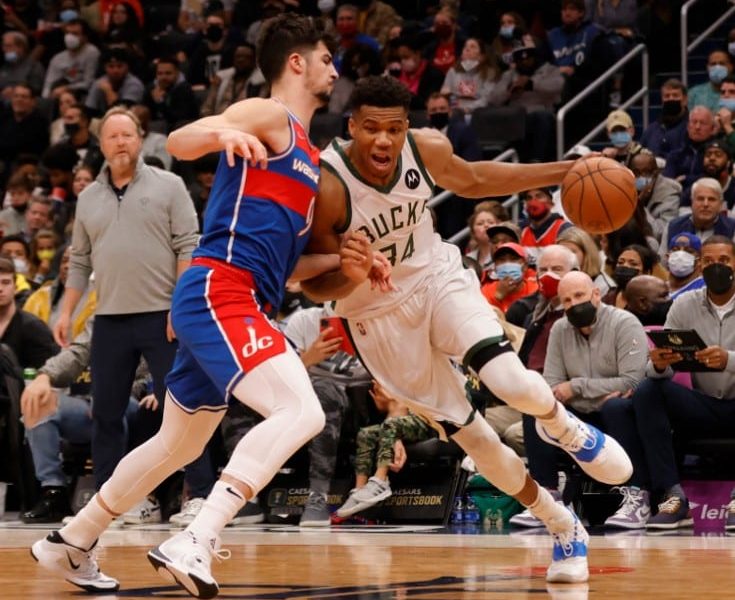 In tonight’s Eastern Conference clash, the Washington Wizards (23-26, 19-29-1 ATS) are facing off versus the Milwaukee Bucks (31-21, 22-30 ATS); NBA picks are available here. Without Bradley Beal, can the Wizards snap their five-game losing streak? Along with the starting lineups, our top NBA picks and betting trends are featured below.

All Wizards vs Bucks betting odds can be found at BetOnline

Furthermore, in the Wizards’ 115-95 road loss against the Grizzlies on Saturday, forward Kyle Kuzma scored a team-high 30 points in 36 minutes played. Forward Kentavious Caldwell-Pope contributed 15 points and 2.0 rebounds in 27 minutes of action as well. Washington has won four of its last 10 games. Though, the team is on a five-game skid. Counting this defeat, the Wizards are now 10-14 away, 13-12 at home, and 7-16-1 ATS on the road this season.

Per ESPN’s Basketball Power Index, the Bucks have a 68.8% chance of winning.

Regarding other head-to-head matchups, in the previous three meetings, the Bucks are 2-1 against the Wizards. On Nov. 7, 2021, the first meeting during this regular season, Washington won 101-94 at Capital One Arena. This victory snapped the Wizards’ eight-game losing streak versus the Bucks. Milwaukee last defeated them on May 5, 2021, winning 135-134 at Fiserv Forum.

On another subject, Bucks’ guard Donte DiVincenzo was asked about trade rumors. He said, “And if a trade happens? I went through a trade! I experienced that. ‘Hey, you’ve been traded.’ I’ve got that call.” This news relates to the failed Bogdan Bogdanović sign-and-trade from 2020. The Bucks were stripped of a 2022 second-round draft pick for violating the rules on tampering.

Donte DiVincenzo’s answer about trade rumors caught me by surprise.

“And if a trade happens? I went through a trade! I experienced that. ‘Hey, you’ve been traded.’ I’ve got that call.” (He was referencing the Bogdanovic move.)

Additionally, while the Bucks could probably still win, they have a bad habit of surrendering close leads during garbage time. This is why some bettors are picking the Wizards to cover the spread. Milwaukee has failed to cover the spread 17 times at home this season. All things taken into account, pick the Bucks to win, they will cover the spread and the total will go under 227. If you have never placed a bet, read our handicap betting guide. Other NBA Picks are on the main page.

David Pastrnak with a Goal vs. Seattle Kraken

Amid strong class of young catchers, Keibert Ruiz has chance to stand out