Over the past few weeks, Jaylen Waddle‘s breakout season has somehow become old news, as if everyone expected him to suddenly produce like a top-10 receiver. During press conferences, just about every question Dolphins head coach Mike McDaniel fields about Waddle is also about Tyreek Hill.

“Yeah, that’s exactly what it is,” Miami QB Tua Tagovailoa said earlier this month. “If one gets doubled, we’re looking for the other, and if that one is doubled as well — if they double both of them — then we’ve got to find the next guy.”

But Tagovailoa doesn’t often have to go to the next guy. Hill or Waddle has led Miami in receiving yards every game this season. In Week 10, the Browns did what they could to limit the Dolphins from finding their top two options, with Waddle logging 66 receiving yards and Hill getting 44 and a touchdown. But Miami also made use of receiver Trent Sherfield, fullback Alec Ingold and tight end Mike Gesicki. The Dolphins put up 39 points. And they made it look easy.

Heading into Miami’s bye week, Hill and Waddle both rank among the league’s top five in terms of receiving yards. Hill has 81 catches for 1,148 yards and four touchdowns. Waddle has 51 catches for 878 yards and six touchdowns. It’s not as simple as saying Waddle is up there with the likes of Cooper Kupp, Stefon Diggs and Justin Jefferson, the other wideouts who comprise the top five. But it’s also unfair to discount him completely from elite WR status.

“Jaylen Waddle doesn’t get enough credit for what he truly does,” Hill said last Thursday. 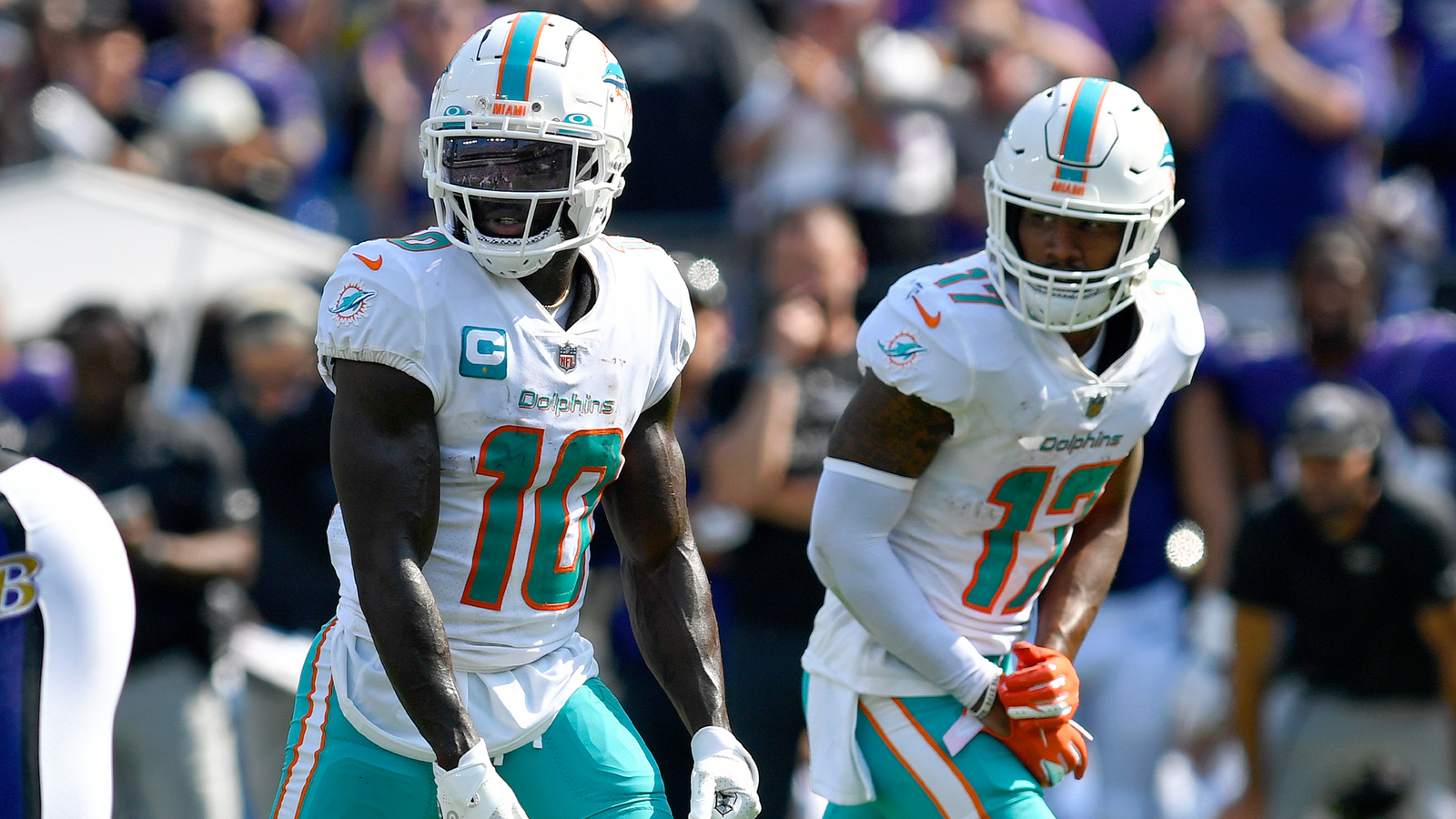 On the Week 9 edition of “Peter Schrager’s Cheat Sheet,” Schrager discussed why Dolphins receivers Tyreek Hill and Jaylen Waddle are one of the best teammate duos in the league.

The tricky part of evaluating Waddle as a truly elite receiver is that he’s Miami’s WR2. That means he generally draws coverage from teams’ second-best cornerback. That context muddles the picture of how to rank him among the top receivers. But if Waddle is not already in the top 10, he is doubtless among the top 30. After all, he was the top receiver in the truly awful Miami offense last year and managed 104 catches for 1,015 yards and six touchdowns. That proved he could hold up the mantle of WR1 — perhaps especially given the fact that he put up yardage in an offense in which he was the center of attention for defenses.

Advanced statistics reveal more of what the counting stats show. Waddle ranks as the eighth-best receiver in the NFL by PFF grades. While Hill is well-known as a yards-after-catch machine, it’s actually Waddle (not Hill) who ranks in the top 10 among receivers in YAC, with 6.5 yards after catch per catch. That’s a full two yards more than his expected yards after catch per catch, according to Next Gen Stats. In other words, Waddle is generating big plays. He’s not just allowing the offense — schemed up by McDaniel — to generate the big plays for him.

In so many ways, Waddle is in Hill’s echelon. Even Dolphins receivers coach Wes Welker couldn’t talk about one without the other.

“Those guys are just different. It makes our job a lot easier,” Welker said. “Where there can be a little bit of error with them — a lot of guys have to be more perfect, especially in the NFL — the line of error for them is a little more than others.”

Waddle isn’t one to say much or pump his chest. Even his iconic touchdown celebration — The Waddle — is a little goofy (whereas Hill’s self-aggrandizing TD celebrations belong in a gymnastics gym.) Hill will remain in the spotlight, and Waddle seems content to let him have it. But given what Waddle has accomplished this season, there’s little doubt that he could be a No. 1 receiver on another team. Instead, he’s No. 1b in the highest-octane offense in the NFL.

And Miami isn’t going to stop feeding their top two options unless the NFL makes them. Tagovailoa was asked recently how many times he’s willing to target Waddle and Hill.

“However many times they can get open,” he said.

Jazz are legit, Warriors are in trouble, Doc Rivers must go and other takes on the young 2022-23 NBA season