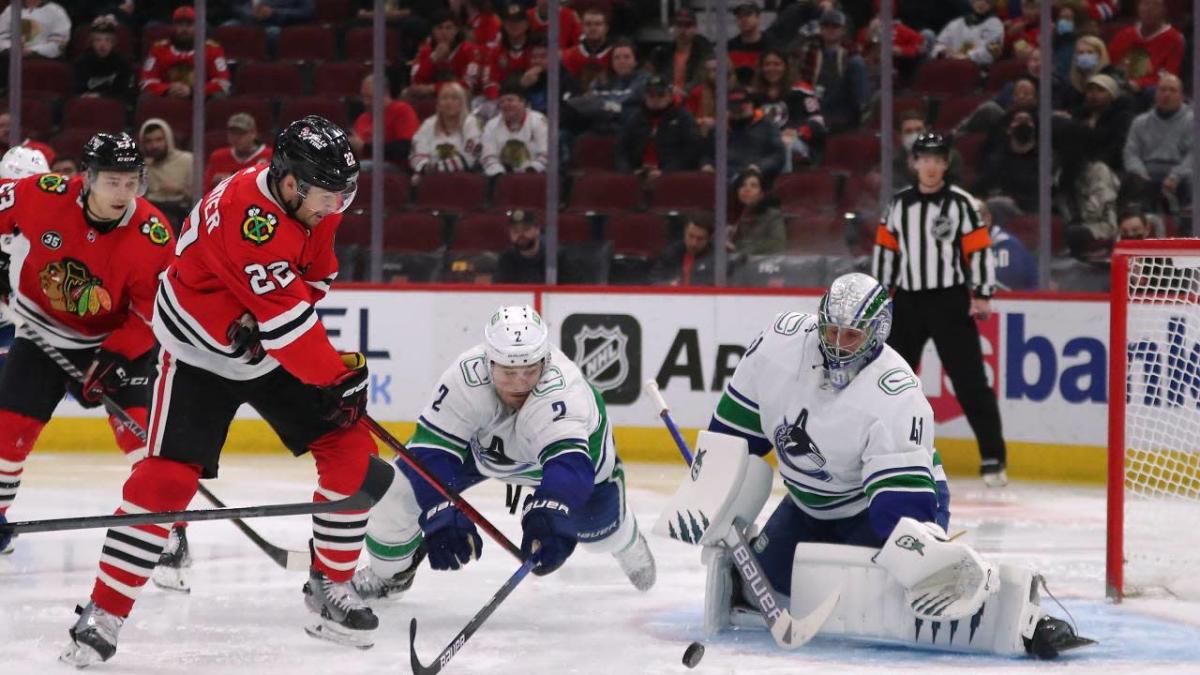 The Blackhawks fell to the Vancouver Canucks 3-1 at the United Center on Monday.

1. The Blackhawks got off to one of those “sleepy” starts, as interim head coach Derek King calls it. They had only nine shot attempts in the first period and four of them came on the power play. The Canucks had 27 shot attempts and took a 1-0 lead into the intermission. The Blackhawks are lucky it wasn’t worse.

2. Marc-Andre Fleury suffered his first regulation loss in a start against Vancouver since Jan. 16, 2006. He was 13-0-2 with a 2.39 goals-against. average, .920 save percentage and two shutouts in his previous 15 starts. I can assure you he wasn’t the reason the Blackhawks lost.

3. The Canucks improved to 9-2-1 against the Blackhawks since the 2017-18 season. The dominance used to be the other way around. Weird times.

4. When the second line of Kirby Dach, Alex DeBrincat and Sam Lafferty were on the ice at even strength, the Canucks led in shot attempts (13-2), shots on goal (5-1), scoring chances (6-1) and goals for (1-0), according to Natural Stat Trick. They had a tough night, and all four lines got shuffled at the end of the second period because nothing was working.

6. Vancouver was credited with 30 hits and Luke Schenn led the way with 12 (!!). Chicago had 25 hits and MacKenzie Entwistle led the team with six.

7. The good news? The Blackhawks allowed only four high-danger chances during 5-on-5 action. The bad news? They generated only 13 scoring chances at 5-on-5.

9. There were 12 scouting/representatives in attendance at the United Center: Boston, Calgary, Columbus, Dallas, Montreal, Nashville, New Jersey, N.Y. Rangers, Pittsburgh, Tampa Bay (2) and Vegas. One team had its Vice President of Hockey Operations and another its director of pro scouting. The NHL trade deadline is on March 21, so we’re entering a time where there will be heavier scouting presences for games.

10. The Blackhawks announced before the game that Marian Hossa, Eddie Olczyk and Patrick Sharp will assist in the organization’s search for a full-time general manager. The interview process will begin this week. Stay tuned.

Senegal beginning to live up to billing after slow AFCON start