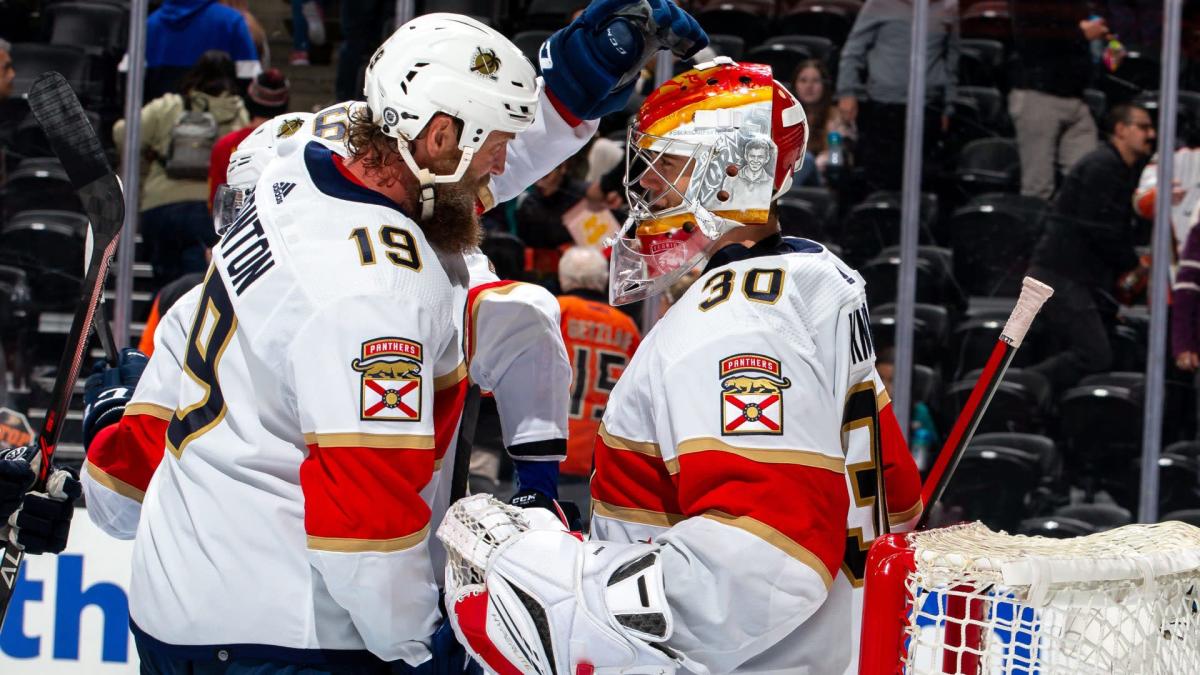 SUNRISE, Fla. (AP) — Claude Giroux said he would probably giggle if the Florida Panthers afforded him the opportunity to be linemates with Aleksander Barkov.

In Giroux’s first full-fledged practice with the Panthers, the pairing happened.

“Looked like he was having fun,” Panthers interim coach Andrew Brunette said.

Whether Giroux actually giggled during that practice was unclear, though this much is certain: The Panthers are a happy bunch these days. Sitting atop the Eastern Conference with 20 games to go and after stockpiling a bunch of new talent — Giroux foremost on that list — around the trade deadline, the goal has never been clearer. It’s Stanley Cup or bust for Florida, a notion that would have been comical in most seasons for the franchise.

Those tough days for the Panthers are forgotten. Or at the very least, not worth thinking about anymore.

“I can’t say I’d been stopping and looking back at all,” Barkov said. “I’m just living day by day and enjoying the time here and like I’ve said many times already, we have a great group of guys and every day you come to the rink you just look forward to the next day … when you see them again and enjoy them and work hard again.”

Already armed with the league’s highest-scoring offense and a top-10 power play unit, the Panthers added a player like Giroux who brings extra punch. Florida went into the trade deadline assessing needs; a left-shooting defenseman was high atop the team’s wish list, so the Panthers went out and got Ben Chiarot from Montreal — a move that looks even more vital now that Aaron Ekblad will miss a few weeks with a lower-body injury. Chiarot will meet the team in Montreal on Thursday and may play that night when the Panthers visit the Canadiens.

“He’s a big, physical defenseman,” Barkov said. “He can play hockey, too. He makes plays with the puck, without the puck. He’s going to bring a lot of physicality and he’s going to be big for us. I don’t know who he’s going to play with, but we’re really excited to have him.”

Florida ranks 27th in the 32-team league in faceoff win percentage. Enter Giroux, one of the absolute best at the dot. Entering Tuesday, there were 236 players with more than 65 faceoffs taken this season. Of those, only three have a better success rate than Giroux, who has won 61% of the nearly 1,000 draws he’s taken so far in the 2021-22 season.

Defenseman Robert Hagg was brought in from Buffalo for more depth, a move that reunites him with former teammate Radko Gudas.

There were no words at the start of the call when Hagg was letting Gudas know he was en route to Florida. They were just laughing.

Hagg’s first practice was Tuesday. His assessment: “There’s a lot of skill.”

And then he laughed, again.

No wonder Giroux may be giggling. The Panthers, at long last, are happy entering a playoff run.

“Just trying to get the pieces to fit a little bit,” Brunette said. “Sand down the edges and try to make it all kind of come in smoothly, which we will do over time. There’s going to be a little bit of a learning process, but their IQs are off the charts. It’s going to be fun to watch.”

After trades, the Panthers are happy entering stretch run originally appeared on NBCSports.com

'There's no fear at all' ... except for USMNT fans