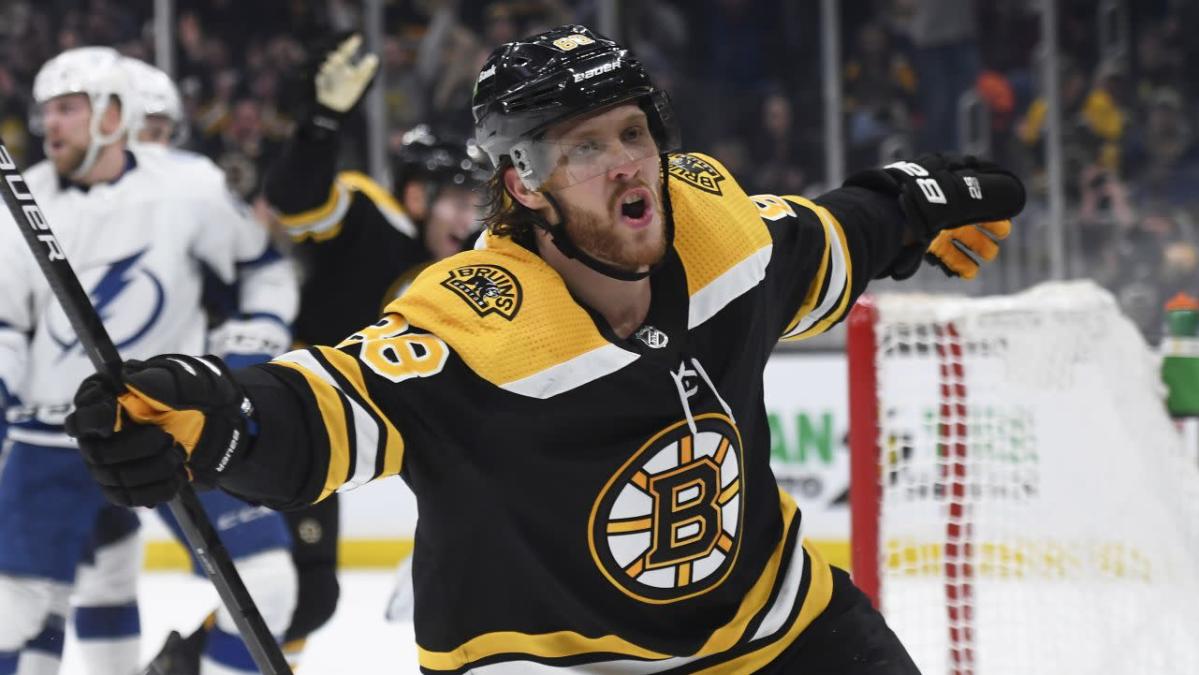 BOSTON — In order to appreciate the remarkable turnaround the Bruins have engineered over the last couple months, we need to take a spin through the time machine and travel back to Christmas Eve of last year.

It was at that moment the B’s owned a 14-10-2 record, good for ninth place in the Eastern Conference and 14 points behind the defending champion Tampa Bay Lightning for first place in the Atlantic Division.

Fast forward to Thursday night and the Bruins leaped over the Lightning in the division standings with a 3-2 win at TD Garden that came without Boston’s captain and most valuable forward, Patrice Bergeron.

The Bruins were a mess in December, both on and off the ice. Players such as David Pastrnak were struggling to score. The goaltending was subpar. Nearly a dozen players were out of the lineup due to COVID-19, forcing a two-week break from games.

Boston came into the New Year a completely different team. This group has the second-best record in the NHL (tops in the East) at 26-9-3 since Jan. 1. Not only are the Bruins winning games, they have the look and feel of a legit championship contender. However you look at it — offense, defense, goaltending — this team is firing on all cylinders.

Thursday night’s win was a fantastic example. They trailed 1-0 and 2-1, went 0-for-5 on the power play, didn’t have Bergeron and still found a way to beat an elite opponent, powered by Pastrnak’s 12th career hat trick and the stellar debut of newly acquired defenseman Hampus Lindholm.

“Obviously, it’s a big win,” Pastrnak said. “Overall, any games against your division teams are big. We’ve been chasing those three teams for a while, so our main focus is on our game, grow our game. We have tons of games left. To beat a great team like Tampa is a confidence booster. At the same time, I think we deserved the win today. I think we were the better team.”

The Bruins didn’t just beat the Lightning, they dominated for long stretches of the game. At one point the Bruins held a 27-9 advantage in shots on net. Tampa Bay went the first six minutes of the second period without forcing B’s goalie Jeremy Swayman to make a save. High-danger chances at 5-on-5 were 11-4 in favor of Boston.

It’s fair to wonder how much more confidence a team that’s won 13 of its last 16 games can get, but this victory over the Lightning was quite impressive. And it’s the second time since Jan. 1 that the Bruins have outplayed the Lightning by a wide margin.

“There are different circumstances. Sometimes you catch a team (at the right time). But three times now is going to give us confidence,” Bruins coach Bruce Cassidy said. “On the flipside, this is the two-time defending Stanley Cup champions, so we’re excited we won and played well, but we’re not getting ahead of ourselves, either. We know who Tampa Bay is, they know who they are and the road runs through them, eventually.

“But this is good. It’s good for the guys in the room to know that if we play a certain way we have a chance to beat them and can outplay them in certain areas. That’s the positive of that, and you should be confident when you beat a really good team. I’m not taking that away from our group. But I’ll never get down on Tampa. They’re too good of a hockey club. They’ve accomplished too much. But good for us.”

The Bruins’ road to the Stanley Cup Final will be brutal. Five or six of the top seven contenders are in the East. But if the Bruins defend as well as they have the last few weeks, and Swayman maintains his fantastic play in net, it’s going to be tough to bet against the Bruins come playoff time.

Nick Goss on Bruins’ outlook as playoffs near

The Bruins are now tied with the Toronto Maple Leafs for second place in the division. They are seven points behind the Florida Panthers for first place with one more game played. Challenging the Panthers for the division crown is not an unrealistic goal for the Bruins with 18 games left in the regular season.

This scenario would have been unthinkable just a few months ago, but that’s where we are with the Bruins. They are the hottest team in the league and have found the right line combinations and defense pairings to produce consistently strong results at both ends of the ice.

The Bruins’ road to the Stanley Cup Final will be brutal. Five or six of the top seven contenders are in the East. But if the Bruins defend as well as they have the last few weeks, and Swayman maintains his fantastic play in net, it’s going to be tough to bet against this team come playoff time.

Hornets vs. Jazz: Lineups, injuries and broadcast info for Friday