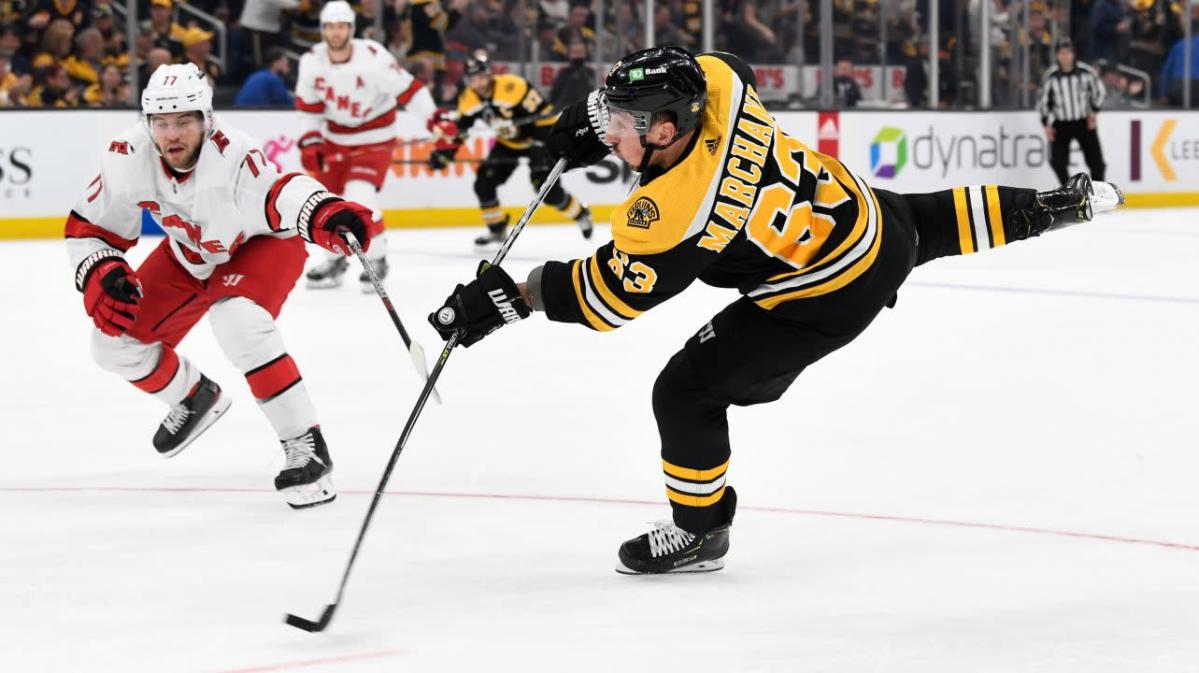 BOSTON — Game 7 will be needed to determine a winner in the first-round playoff series between the Bruins and Hurricanes.

Boston staved off elimination with a 5-2 win over Carolina in Thursday night’s Game 6 at TD Garden.

The home team has won every matchup in this series. The Bruins have outscored the Hurricanes 14-6 in the three games played at the Garden. Carolina has outscored Boston 15-4 in the three matchups played at PNC Arena.

Can the Bruins break that home ice trend in Game 7 on Saturday night?

Before looking ahead to that decisive matchup, here are three takeaways from Bruins-Hurricanes Game 6.

The Bruins opened the scoring for the first time in nine games against the Hurricanes (including the regular season) when Brad Marchand beat Carolina goaltender Antti Raanta 46 seconds into the second period.

The goal was Marchand’s fourth of the series, which leads all players. Each of these goals have been scored in Boston.

He also picked up an assist on Charlie Coyle‘s power-play goal late in the second period that doubled the Bruins’ lead.

Marchand’s 11 points are tied for the most in the first six games of a single Bruins playoff run since 1972. There are some impressive names on the list below:

The 33-year-old left winger also has scored the most goals in Bruins playoff history when facing elimination:

Marchand currently leads the playoffs in scoring with 11 points (four goals, seven assists). His offensive production is a huge reason why Boston forced a Game 7. The challenge for Marchand — and the rest of the Bruins — is bringing this scoring momentum to PNC Arena in Carolina. Marchand has tallied zero goals and only one assist in three games in Raleigh this series.

2) B’s penalty kill does its job

The Bruins went 10-for-10 on the penalty kill in Game 3 and Game 4 at the Garden earlier in this series, and this unit again was stellar in Game 6 with a 3-for-4 showing.

Boston’s penalty kill did a great job blocking shots (four total while shorthanded), clogging passing lanes and winning puck battles along the boards. As a result, the B’s gave up just two shots on net in 9:24 of penalty kill time. One of the key moments in the game came midway through the second period when the Bruins were down two men for almost a minute and prevented the Hurricanes from scoring, thus protecting a 1-0 lead.

The only power-play goal the Bruins gave up came with 2:30 remaining in the third and Boston up 5-1.

The PK hasn’t been a strength for the Bruins during the games in Carolina this series. The B’s allowed four power-play goals in 17 opportunities in Game 1, Game 2 and Game 5 combined. If the penalty kill we saw Thursday night shows up in Game 7, the Bruins will have a much better chance of finally winning in Raleigh.

Swayman made his fourth straight start — first time he’s started that many games in a row as a Bruin — and played fantastic. He made 23 saves on 25 shots (.920 save percentage) for his third win of the series.

The rookie netminder made a couple clutch saves in the opening period, including one where he made a lunging left pad stop with Carolina applying lots of attacking zone pressure.

Shortly after giving up the Hurricanes’ first goal early in the third period, Swayman made a phenomenal stop on Martin Necas. The Hurricanes winger was all alone in front of the net and Swayman denied his backhand attempt that could’ve tied the score 2-2.

The Hurricanes did get another goal on the power play, but it only trimmed the lead to 5-2 with 2:22 remaining in the third period.

The Bruins didn’t give up a ton of quality scoring chances, but Swayman did his job and gave another strong performance to extend the series. Expect him to make his first ever Game 7 start on Saturday night.

Heat surge in 3rd quarter to eliminate Sixers in 6 games