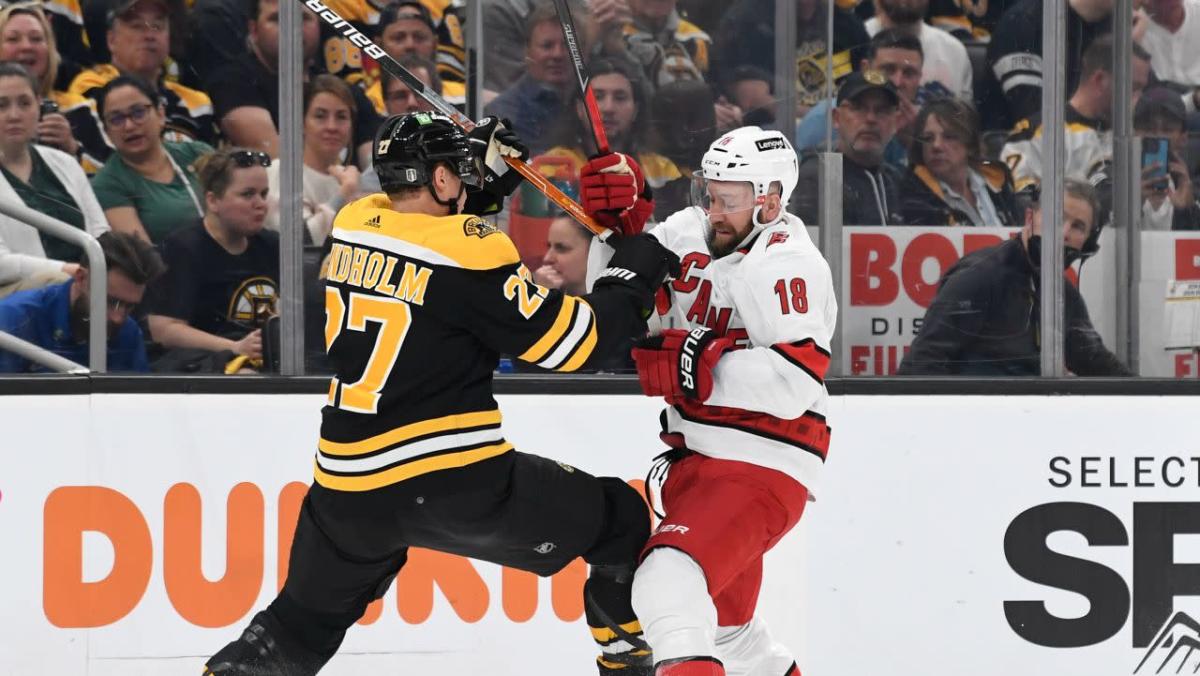 The winner of the first-round playoff series between the Boston Bruins and Carolina Hurricanes will be decided Saturday afternoon in Game 7 at PNC Arena.

The home team has won every game in this series. The Bruins are hoping to break that trend and advance to the second round for the fifth straight year.

One factor in the Bruins’ favor is experience. The Bruins have played in a ton of Game 7s — 12 since 2008 and three since 2018 — and their two-best forwards, Patrice Bergeron and Brad Marchand, have often played pretty well in these matchups. Bergeron has six goals in his last seven Game 7s. Marchand scored twice in Game 7 of the 2011 Stanley Cup Final against the Vancouver Canucks, leading the B’s to a championship and their first and only Game 7 road win in team history.

Here’s what needs to happen for Bruins to win Game 7 vs. Hurricanes

Neither team is expected to make any changes to its Game 6 lineup. Bruins goalie Jeremy Swayman and Hurricanes goalie Antti Raanta will each make their first career Game 7 start.

On this date 13 years ago, the Hurricanes beat the Bruins in Game 7 of the second round when Scott Walker scored in overtime. Will the B’s get revenge Saturday afternoon?

Here’s a preview of Bruins-Hurricanes Game 7, including projected lineups, betting odds and more.

Hampus Lindholm returned to action in Game 6 after missing the three previous matchups because of an upper body injury. He was knocked out of Game 2 by a hard hit from Hurricanes forward Andrei Svechnikov.

The Swedish defenseman played very well in his return. He helped the Bruins exit their own zone cleanly and defended very well — including a breakup of a 2-on-1 scoring chance during the first period. Lindholm actually led all players with 24:48 of time in Game 6, including just over three minutes played on both the power play and penalty kill.

The Bruins have a 62-38 edge in shot attempts, a 29-20 lead in shots on net and a 28-20 advantage in scoring chances during Lindholm’s 46:49 of even-strength ice time this series. He’s helping Boston drive puck possession, scoring chances and defend at a high level.

Expect the Bruins to ride their top pairing of Lindholm and Charlie McAvoy as much as possible in this must-win Game 7. Don’t be surprised if both play 25-plus minutes.

Will the officials keep calling lots of penalties?

Special teams has been a huge area of weakness for the Bruins during the games played in Carolina.

The ‘Canes have had an average of 6.33 power plays in their home games, and they’ve scored four times with the man advantage (twice in Game 2 and Game 5). This success on the power play is one of the biggest reasons why Carolina has outscored Boston 15-4 at PNC Arena.

The Bruins power play has been awful on the road, converting on just one of 11 opportunities. Game 5 was a low point for Boston’s power play as it generated just three shots on net and only one high-danger scoring chance in 5:12 of time with the man advantage.

There have been 61 power plays in this series — 33 for Carolina and 28 for Boston. That’s a lot of ice time with guys in the penalty box.

Officiating could play a key role in the outcome of Game 7, and B’s head coach Bruce Cassidy is already trying to get the referees’ attention. Speaking to reporters on Friday, he lauded the Hurricanes’ ability to sell penalties.

All lines via PointsBet

The Wraparound: Maple Leafs, Oilers try to rewrite their story