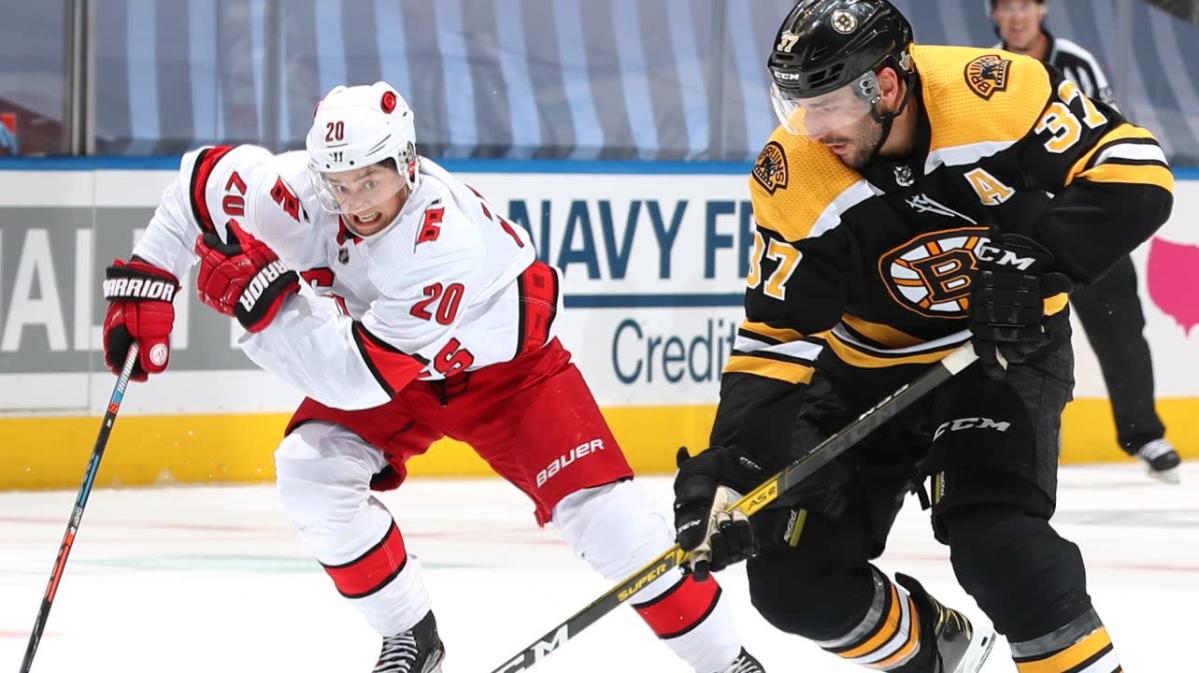 The Boston Bruins and Carolina Hurricanes will write the latest chapter in their growing Stanley Cup Playoff rivalry Monday night in Game 1 of the first round.

It will be the third playoff series between these teams in the last four years. The Bruins won the other two pretty easily, sweeping the Hurricanes in the 2019 Eastern Conference Final and eliminating them in five games in the 2020 first round.

This series, whether you look at the betting odds or expert predictions, is expected to be a much more competitive matchup that goes six or seven games.

Let’s look at three important matchups to keep a close eye on during the Bruins-Hurricanes first-round playoff series.

Sebastian Aho just completed the best regular season of his career, tallying a career-high 37 goals along with 44 assists for 81 points. He is Carolina’s No. 1 center and the engine that drives one of the league’s top 10 offenses.

In the Bruins’ two recent playoff series against the Hurricanes — 2019 conference final and 2020 first round — one of the reasons why Boston won eight of the nine games played was because Bergeron‘s line shut down Aho and his line.

In those nine games, the Bruins earned a 42-38 advantage in shot attempts, a 29-12 edge in shots on net, a 25-22 lead in scoring chances and a 2-0 lead in goals scored when Bergeron was on the ice against Aho during 5-on-5 action, per Natural Stat Trick. Aho scored only one goal (on the power play) in those nine games combined.

Could the Hurricanes eliminate the Bruins if Aho has a bad series at 5-on-5? Sure. Carolina has a decent power play and is elite defensively, so it’s possible this team could win a bunch of low-scoring games. But any struggles from Aho ramp up the difficulty for the ‘Canes quite a bit.

He’s their best offensive player and likely will be matched up against the top defensive forward of all time in Bergeron, who should easily win his fifth Selke Trophy later this year.

This will be a fascinating matchup to watch.

If you zoom out and look at the entire regular season, the Bruins power play wasn’t too bad at all. It ranked 15th in the league with a 21.2 percent success rate. So what’s the issue? Well, the Bruins power was absolutely dreadful in April.

This unit was in an 0-for-39 slump until last Thursday’s win over the Buffalo Sabres.

The Hurricanes are a bad matchup for the Bruins power play. Carolina has a well-structured PK that does a great job eliminating passing lanes, blocking shots and winning 50-50 puck battles. The Hurricanes penalty kill ranked No. 1 in the league at 88 percent.

There’s too much skill on Boston’s power play for that group to struggle so much over a long period. The top unit likely will consist of Bergeron, Brad Marchand, David Pastrnak, Taylor Hall and Charlie McAvoy. Those are five of the most offensively skilled players in the league.

These squads are pretty evenly matched 5-on-5, especially defensively. Therefore, one area where the series could be decided is special teams, and the Hurricanes go into this matchup with the advantage there.

The Lindholm-McAvoy pairing vs. anyone

The Bruins didn’t have a legit, two-way star to play next to Charlie McAvoy on the top pairing over their last three playoff runs. They fixed that weakness at the trade deadline by acquiring Hampus Lindholm from the Anaheim Ducks.

Lindholm was fantastic with the B’s, particularly alongside McAvoy, during his 10 regular season appearances after the trade.

In other words, the Bruins dominated puck possession, scoring chances and goals when they had their top pairing on the ice. Carolina has better depth on its blue line overall, so it’s vital for the Bruins that their No. 1 duo performs at an elite level in their tough matchups versus the Hurricanes’ top two lines.

How the Capitals can win, and lose, against Panthers in Stanley Cup playoffs