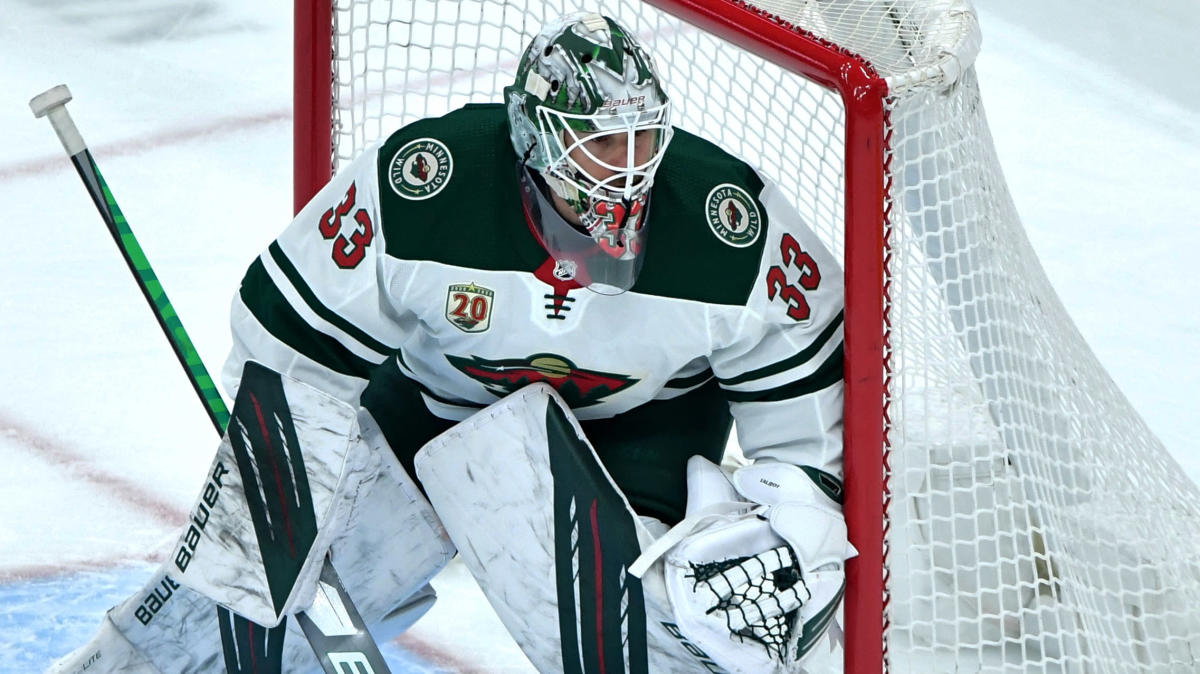 Cam Talbot – Minnesota Wild: The Minnesota Wild made big moves at the trade deadline by acquiring Marc-Andre Fleury from the Chicago Blackhawks, but Talbot has been showing up in the crease as of late. He has earned victories in his past seven starts. Talbot also earned a 28-save shutout against the Vegas Golden Knights on March 21st. In his last outing on March 24th against the Vancouver Canucks he made 26 saves on 28 shots to post a save percentage of .929. He has a record of 26-12-1. Through 40 appearances, Talbot has accumulated a save percentage of .910 and a GAA of 2.82. This upcoming week Minnesota will play the Philadelphia Flyers, Pittsburgh Penguins, Carolina Hurricanes, and Washington Capitals. Fleury will make his Wild debut on March 26th and his performance in that game will indicate how the schedule will be divided up going forward.

Jeremy Swayman – Boston Bruins: Swayman has just one loss in his past four appearances. In all four of those games he ended his night with a save percentage above .900. His last start was on March 24th against the Tampa Bay Lightning. During that game made 22 saves on 24 shots to post a save percentage of .917. He is coming off two back-to-back wins and will look to keep this positive momentum going in this week’s outings against the Toronto Maple Leafs, New Jersey Devils and the Columbus Blue Jackets. Swayman has a record of 19-8-3, along with a save percentage of .925 and a GAA of 2.09.

Igor Shesterkin – New York Rangers: Shesterkin had a rare poor performance on March 22nd against the New Jersey Devils. During that game he allowed five goals on 24 shots and ended his night with a .792 save percentage after playing 40 minutes. He bounced back from this unusual performance in his next game against the Pittsburgh Penguins on March 25th, during which he made 20 saves on 21 shots and picked up a win. Shesterkin has a record of 31-9-3. His save percentage sits at .936 and he has a GAA of 2.11. The Rangers will play the Pittsburgh Penguins, Detroit Red Wings, New York Islanders, and Philadelphia Flyers next week.

Jake Oettinger – Dallas Stars: This past week Oettinger has been alternating between good and mediocre stats. He had a good showing against the Washington Capitals on March 20th, during which he made 36 saves on 38 shots and earned a win. On March 22nd against the Edmonton Oilers he earned another win, but this time allowed three goals on 25 shots to post a save percentage of .880. He does have just one loss in his past four outings so even though this week he is on the edge, the odds still go towards him being a good option. Oettinger has a record of 22-10-1. His save percentage sits at .917 and he has a GAA of 2.49. Next week the Stars will play the Anaheim Ducks twice and then the San Jose Sharks and Seattle Kraken once. These matchups provide Oettinger plenty of opportunity to boost his stats.

Philipp Grubauer – Seattle Kraken: Grubauer has had a tough year with the Kraken to say the least, but as of late he has found himself in a bit of a positive stretch. He has just one loss in his past four outings. That loss came against the Tampa Bay Lightning on March 16th, but even in that matchup he posted a save percentage above .900 after stopping 38 out of 42 shots. He has a record of 15-26-5. His save percentage sits at .889 and his GAA is at 3.17. This upcoming week the Kraken will play the Los Angeles Kings, Vegas Golden Knights twice and then they will end the week with a game against the Dallas Stars.

Andrei Vasilevskiy – Tampa Bay Lightning: Vasilevskiy has not been posting poor individual performances, but has struggled to find his way into the win column. He is currently riding a three-game losing streak. He made his last start against the Boston Bruins on March 24th. During that game he allowed three goals on 39 shots. The game before that on March 22nd against the Carolina Hurricanes he also allowed three goals, this time on 41 shots. He has a record of 32-14-4. Vasilevskiy’s save percentage is at .920 and his GAA sits at 2.39. Tampa Bay will play the Carolina Hurricanes, Chicago Blackhawks and the Montreal Canadiens this upcoming week.

John Gibson – Anaheim Ducks: Gibson is in the midst of a slump at the moment. He has seven regulation losses and one OT loss in his past eight starts. Gibson’s last win came all the way back on March 1st. He made his last start on March 23rd against the Chicago Blackhawks, during which he allowed three goals on 27 shots. He had a particularly tough showing in the game before on March 21st against the Nashville Predators. In that outing he allowed five goals on 30 shots and ended his night with a save percentage of .833. Gibson’s record currently sits at 17-21-9. He has a GAA of 3.09 and a save percentage of .904. This upcoming week Anaheim will play the Dallas Stars twice to kick off their week and will end their week with two games against the Arizona Coyotes and Edmonton Oilers.

Karel Vejmelka – Arizona Coyotes: Vejmelka has just one win in his past five appearances. He is currently riding a three-game losing streak. Vejmelka has allowed four goals in both of his last two starts. He allowed four goals on 39 shots against the Seattle Kraken on March 22nd, and this was an outing against a weaker offense. Vejmelka has a record of 10-25-1. Through 38 total appearances, his save percentage sits at .904 and he has a GAA of 3.39. Despite the Coyotes going on a bit of a positive run earlier in March, it is evident that right now Vejmelka is not an option even in a daily fantasy scenario. The Coyotes play the Edmonton Oilers, San Jose Sharks, Anaheim Ducks, and the Chicago Blackhawks this next week.

Bulls vs. Cavaliers: Lineups, injuries and broadcast info for Saturday