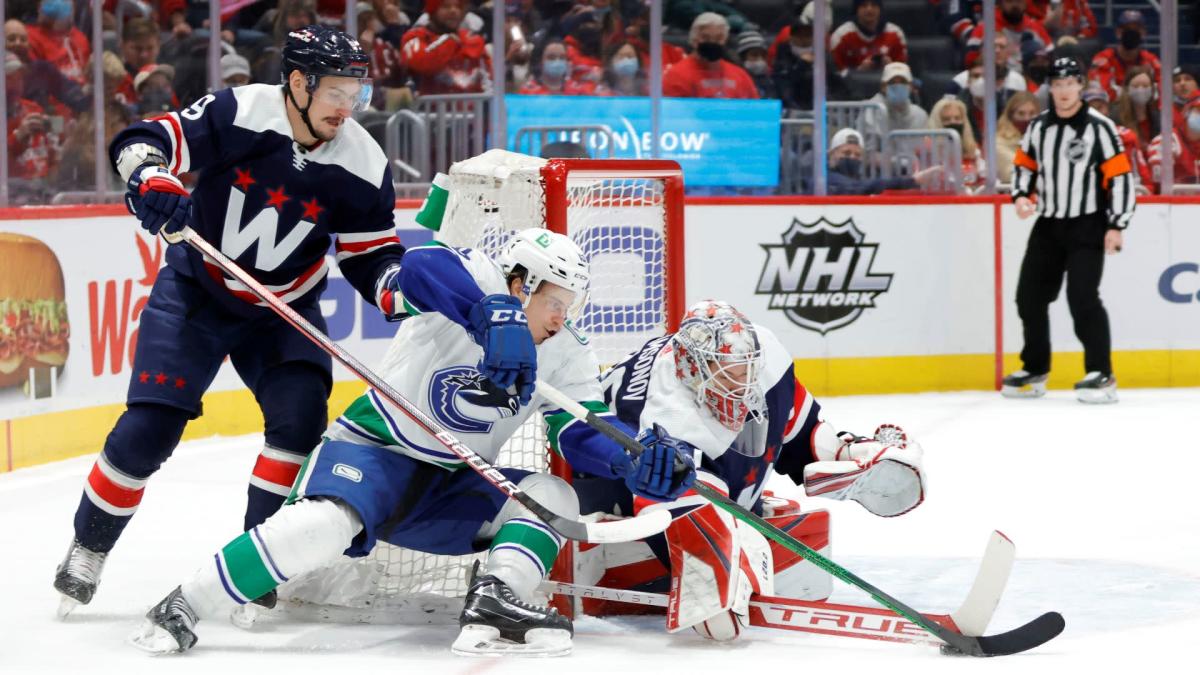 WASHINGTON — The Vancouver Canucks struck twice on the power play to hand the Capitals a 4-2 loss Sunday, their fourth loss in five games.

Here are some observations from the game.

As has become a daily ritual this season, the Caps had to shuffle the lineup due to some unexpected absences. Defenseman John Carlson joined forward Conor Sheary on the NHL’s COVID-19 protocol. Sheary entered the list on Saturday and did not play against the New York Islanders. Carlson was late to warmups as he awaited further test results. He was cleared and played that game, a 2-0 win. On Sunday, however, he entered protocol.

Also out was forward T.J. Oshie. He came out in the first period of Saturday’s game with an upper-body injury. There was no update from Washington coach Peter Laviolette on his status before the game.

The good news was that forward Carl Hagelin and defenseman Dmitry Orlov were activated off of COVID-19 protocol and both played. That was good, but the roster just can’t find any stability.

Ovechkin does it again

WIth Carlson out, only one Capitals player has played in all 39 games this season. Of course, that player is Alex Ovechkin.

On a first period power play, Ovechkin was able to get three one-timers off from his “office” near the left faceoff circle. The first one went wide, the second went off the skate of Canucks goalie Thatcher Demko and out wide. The third time was the charm.

That was Ovechkin’s 26th goal this season which ties him with Edmonton’s Leon Draisaitl for the league lead. It was also power-play goal No. 276, expanding his own NHL power-play record, and also career goal No. 756 pulling him to within 10 of tying Jaromir Jagr (766) for third all-time.

Demko is now the 153rd goalie Ovechkin has scored on. He seems to like playing against former coach Bruce Boudreau. This was just his 12th meeting against his former coach.

Elias Pettersson is a budding star, but he’s having a tough go of it this season. Coming into Sunday’s game, he had only six goals and had not scored since Dec. 14. Of course, Sunday was the game he decided to get hot against Washington and he scored twice in the span of 4:15 in the second period.

Pettersson’s first came on the power play early in the period. He had a lane, but held the puck in order to stickhandle around a sliding defenseman Martin Fehervary before finally firing. Washington goalie Ilya Samsonov tried to snap down the shot with the glove, but missed and it hit the back of the net.

On the second goal, Samsonov made a save at the top of his crease. Pettersson got the rebound and Samsonov tried to stay with him, stopping an initial shot and staying square with Pettersson to force him behind the goal line.

But Samsonov was not able to get back in the net from the initial save so, to stay with Pettersson, he was not up against the post. Pettersson took advantage of that and banked the puck off the back of Samsonov and into the net.

With no Oshie, Sheary or Carlson, the Caps need players to step up offensively. Daniel Sprong tried, but he can’t seem to buy a goal at the moment.

In the first period, Sprong was set up in the slot and he fired a wrister that was swallowed up by Demko. In the second, Sprong was able to get behind the defense with a good burst of speed and turned the corner in on net. It looked like he had Demko beat, but he was not able to get any height on the puck and shot it into Demko’s out-stretched pad.

The Caps entered the game with the ninth-ranked penalty kill and 30th ranked power play. On Sunday, it was the power play that came through for Washington and the penalty kill that cost them.

Even with Carlson and assistant coach Blaine Forsythe, who runs the power play, both in COVID-19 protocol, Washington’s power play was a perfect 2-for-2 on the night. Ovechkin put the Caps on the board in the first. In the third, with the Caps trailing 3-1, Tom Wilson put them back in the game with his power-play tally.

Washington was trailing at that point because Vancouver was a perfect 2-for-2 on the power play as well with goals from Pettersson and Bo Horvat.

Vancouver finished 2-for-4 on the night and that was enough as the Caps suffered another loss.