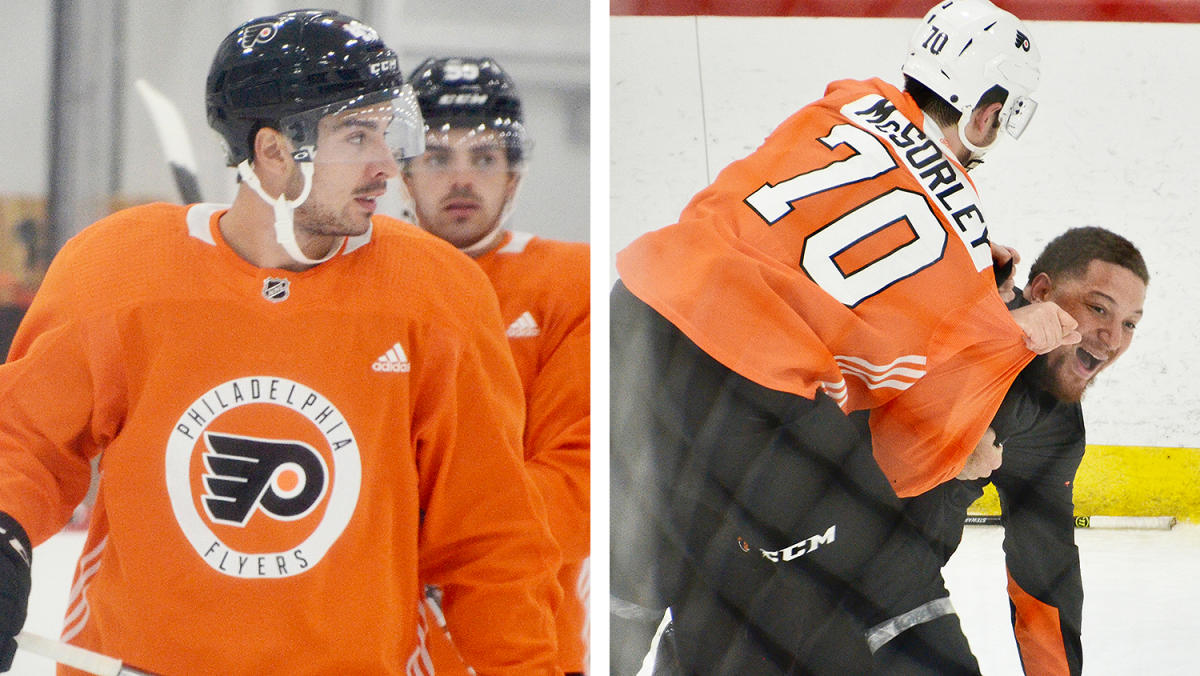 VOORHEES, N.J. — Ian Laperriere told his players to no longer worry about him.

It’s time to woo (or survive) the big boss.

“Some of those guys will come to me, but right now, you want to impress John Tortorella and the management,” the AHL affiliate Lehigh Valley head coach said after Flyers rookie training camp wrapped up Sunday. “And to do that, it’s to play the game that got you here and don’t try to be somebody you’re not.”

Before it all begins, let’s get into three observations from the final day of rookie camp in Voorhees, New Jersey.

In odd-man rush drills, Noah Cates had a pair of excellent defensive plays. His well-roundedness is what stands out. Tortorella is going to want players he can trust defensively and the 23-year-old winger has many of the qualities coaches covet.

“I don’t think I’ll see him, I’ll be honest with you,” Laperriere said with a laugh. “He’s fun to watch. I watched him on TV last year. But just to see him, the questions he asks, his edges on the ice — they’re going to have tough decisions up here and he’s going to be one of them because he’s a hell of a player.”

Next week, we’ll see where Joel Farabee stands in his recovery from offseason neck surgery. His status will impact Cates’ shot at being in the Flyers’ season-opening lineup on Oct. 13. But given what we saw in Cates’ 16-game audition last season and his performances in the two rookie games, he absolutely looks like an NHL player and a guy that can help the Flyers.

“He’s out there, every practice he competes,” Laperriere said. “He’s a little bit older than most of those kids, but still, he’s out there to prove everybody that he belongs with the Flyers.

Fights broke out after practice Sunday.

But player development coach Chris Stewart provided a good-sized group of the rookies some tips on how to conduct themselves in a scrap. The idea came from Laperriere after defenseman Adam Ginning had to drop the gloves with Rangers prospect Jayden Grubbe in the first rookie game Friday night.

The Flyers are not looking to be the Broad Street Bullies again. But Laperriere felt it would be beneficial for the younger players to have at least an idea of what to do if a fight happens to pop up down the road.

“I’m not a dinosaur, I know it’s 2022 hockey, but it’s still part of the game,” Laperriere said. “Ginning, who had a big hit in Game 1 and somebody jumped him, he didn’t know what to do. He had one glove on, one glove off. I told those kids, ‘You should go chat with Stewie and ask him questions, he knows more than all of us.’

“If you get in that situation — we want you to be physical, you don’t have to fight, I don’t believe in fighting in hockey anymore — but it does happen. Better be safe than sorry. At least you’ll know how to protect yourself.

“Obviously they listened because I think we had 20 guys in the corner with Stewie. It’s going to help them. Also, knowing how to defend yourself, you know you don’t need to change your [playing] style.”

“I love the guy,” Laperriere said. “I know he was a really good hockey player, but I know he was really good at doing that. So I grabbed him before practice, I’m like, ‘I wouldn’t mind if you came on the ice.’

“He’s great. He’s just an easygoing guy. He’s going to do whatever we’re asking him to do. He was was excited, he was like, ‘Yeah, Lap, I’ll go out there and show them how to protect themselves.’

“They’ll never fight like Stewie, let’s put it that way, none of those kids are going to fight like Chris Stewart fought. But at least he could give them a couple of pointers to protect themselves. … He can relate with that young generation. Great guy, great teacher.”

Boys on the blue line

Brian Zanetti and Ethan Samson are defensemen the Flyers grabbed in the lower rounds of the 2021 draft. Both will be worth keeping an eye on at the junior level this season.

They were raw prospects when they were drafted but have come a good way since then.

“The way I look at it, I compare them to where they were a year ago,” Flyers player development coach Kjell Samuelsson said Sunday. “Both of them, the same thing there with [Egor] Zamula, they’ve done a good job in the summer.”

Samson just turned 19 years old last month and is coming off of a 43-point season (15 goals, 28 assists) for Prince George.

Does Samuelsson see the upside?

“Absolutely,” he said. “Smart, good stick, sees the ice, has a little bit of an offensive game, too.”

• Samuelsson said prospect Emil Andrae will be back in the lineup Thursday for the SHL’s HV71. The 20-year-old defenseman was hit in the face with a puck during a preseason game earlier this week.

• After making 36 saves in the Flyers’ 5-1 rookie game win Saturday over the Rangers, Samuel Ersson had to briefly leave practice Sunday after taking a shot to his neck. Laperriere said afterward that Ersson was fine.

• An underrated aspect of Elliot Desnoyers‘ game is his shot. He found the back of the net multiple times Sunday in the drills.

Why did Celtics co-owner Wyc Grousbeck say Boston is overrated?