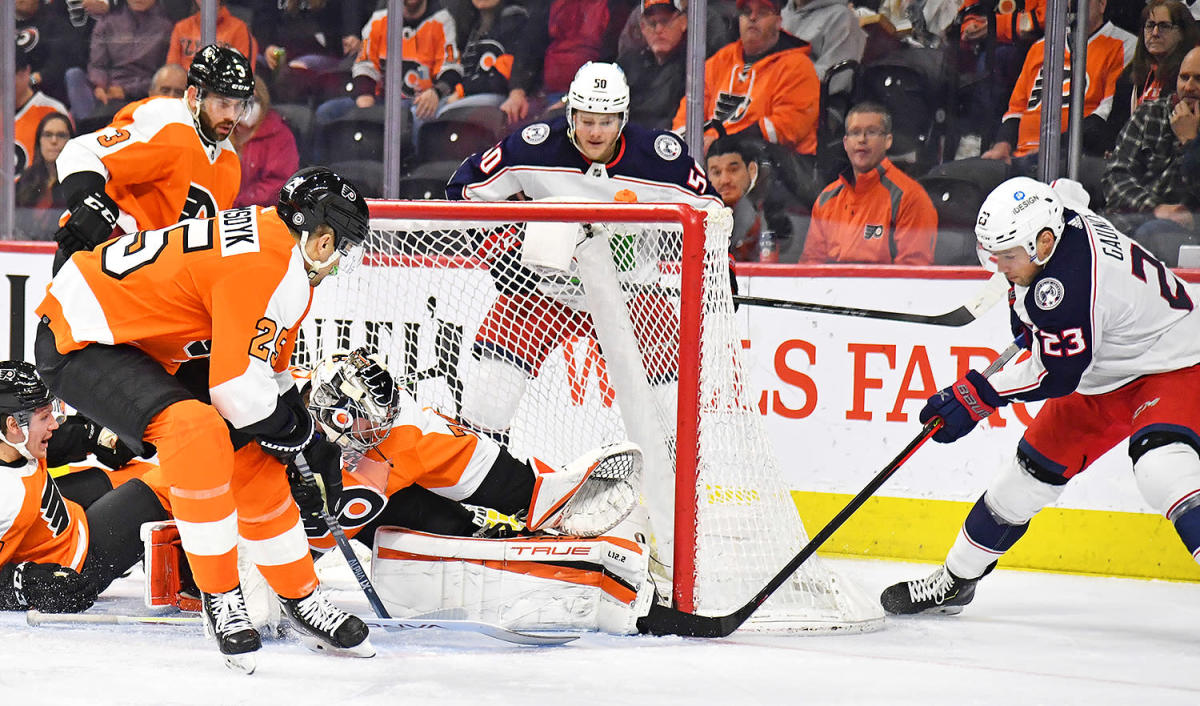 The Flyers lost a game they absolutely should have won Tuesday night at the Wells Fargo Center.

They came up short in two critical areas as they fell to the Blue Jackets, 4-2.

The Blue Jackets (33-32-6), who played the Bruins at home Monday night, snapped a seven-game skid.

With the game tied 2-2 in the third period, the Flyers went on their fourth power play and came up empty.

About four minutes later, Justin Danforth scored at even strength to give Columbus a 3-2 edge.

The Blue Jackets sealed the game with an empty-netter.

• Hart had allowed six goals in each of his last two starts, which came against the Avalanche and Maple Leafs, two of the NHL’s top three goal-scoring teams.

“It’s a shot from the point with traffic, so just tried to get my body in front,” Hart said. “Rebound ends up in front and I go to swipe it away and just missed it.”

The 23-year-old didn’t see consistent action because the Flyers played a lot in the offensive zone.

Hart yielded first-period goals to Brendan Gaunce and Carson Meyer. Meyer was the beneficiary of a 2-on-1 and put Columbus ahead 2-0.

The Flyers really got after Blue Jackets netminder Elvis Merzlikins.

They made him work from the onset and fired 49 shots at him by the end of the night. The 27-year-old finished with 47 saves.

“Quality of shots was good,” Flyers interim head coach Mike Yeo said. “I thought that many times we had net-front. I think it was just a phenomenal performance by their goalie. That’s the story of the game.”

• The Flyers’ college prospects who recently signed their entry-level deals did some good things.

Late in the first period, Cates scored his first career NHL goal in his fourth game. The 23-year-old winger unleashed a pump of the fist and a big smile as he pointed at Patrick Brown, who found him in the slot with a nice pass.

“It’s pretty special to put one home, help contribute and be able to say you scored a goal in the NHL,” Cates said.

Ronnie Attard, a defenseman with point-producing potential because of his developed shot, recorded his first career NHL point by assisting van Riemsdyk’s game-tying 2-2 goal in the second period.

Attard, playing his third career game, sent a blast toward the net and van Riemsdyk deflected it home.

• Centering Joel Farabee and Cam Atkinson on the Flyers’ top line, Morgan Frost went scoreless but finished with five shots and won nine of his 16 faceoffs.

“Frosty, I thought he was just buzzing for the first two periods,” Yeo said. “In the third period, not that he was bad, but I would like to see that continued confidence. That’s just part of the learning experience and learning curve for a young player.”

• Scott Laughton returned to the lineup after being sidelined March 10 because of a concussion.

Defenseman Nick Seeler (lower body) could be out for the rest of the season and winger Zack MacEwen (head) missed his second straight game. More on them both here.

• The Flyers and Blue Jackets are back at it Thursday in Columbus, Ohio (7 p.m. ET/NBCSP+).

The game will be Atkinson’s first at Nationwide Arena since he was traded to the Flyers last summer. The 32-year-old spent a decade with the Blue Jackets after being selected by the organization in the sixth round of the 2008 draft.

a Goalie Save from Buffalo Sabres vs. Carolina Hurricanes