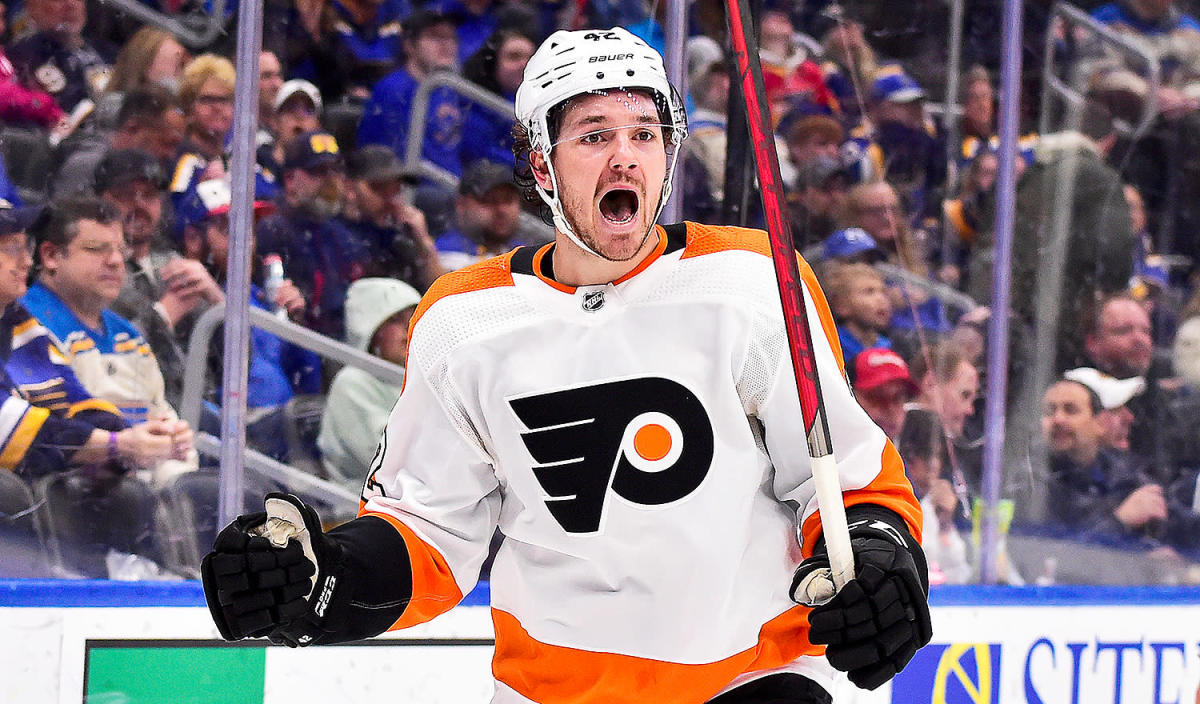 The Flyers picked up their first road win in the year of 2022 by knocking off the Blues, 5-2, Thursday night at Enterprise Center in St. Louis.

Hayden Hodgson, a 26-year-old winger, notched a goal and an assist in his NHL debut.

For a second straight game, the Flyers had to roll with 11 forwards and seven defensemen. Scott Laughton (concussion) and Nate Thompson (shoulder) remained out, while Oskar Lindblom was also banged up and not in the lineup.

• Konecny’s multi-goal effort was his first since the hat trick he scored against the Penguins in the second game of last season.

He scored the game-opening goal on an impressive snipe and then cushioned the Flyers’ lead to 3-1 during the second period when his shot just got past St. Louis netminder Jordan Binnington.

Since the start of February, Konecny has led the Flyers in points with 18 (five goals, 13 assists) over 20 games.

His production will look pretty solid by the end of the season.

More: Giroux in a Panthers jersey is … very weird

• The Flyers had to like a lot of what they did in St. Louis.

With two assists, Kevin Hayes now has 11 points (four goals, seven assists) through 10 games since returning from an infection in his groin area.

Cam York recorded the first multi-point game of his NHL career with a couple of helpers.

Owen Tippett registered his first point as a Flyer with an assist.

Rasmus Ristolainen was strong, bouncing back from a rough game Tuesday.

• Martin Jones, who was not a trade deadline casualty, converted 26 saves for the victory.

Jones had a blemish on St. Louis’ second goal. He played the puck behind his net and turned it over as the Blues cut the Flyers’ lead to 3-2.

Other than that, Jones did his job.

Binnington stopped 22 of the Flyers’ 26 shots.

• The Flyers are right back at it Friday when they visit the NHL-best Avalanche (9 p.m. ET/NBCSP).

Jae Crowder with an and one vs the Denver Nuggets