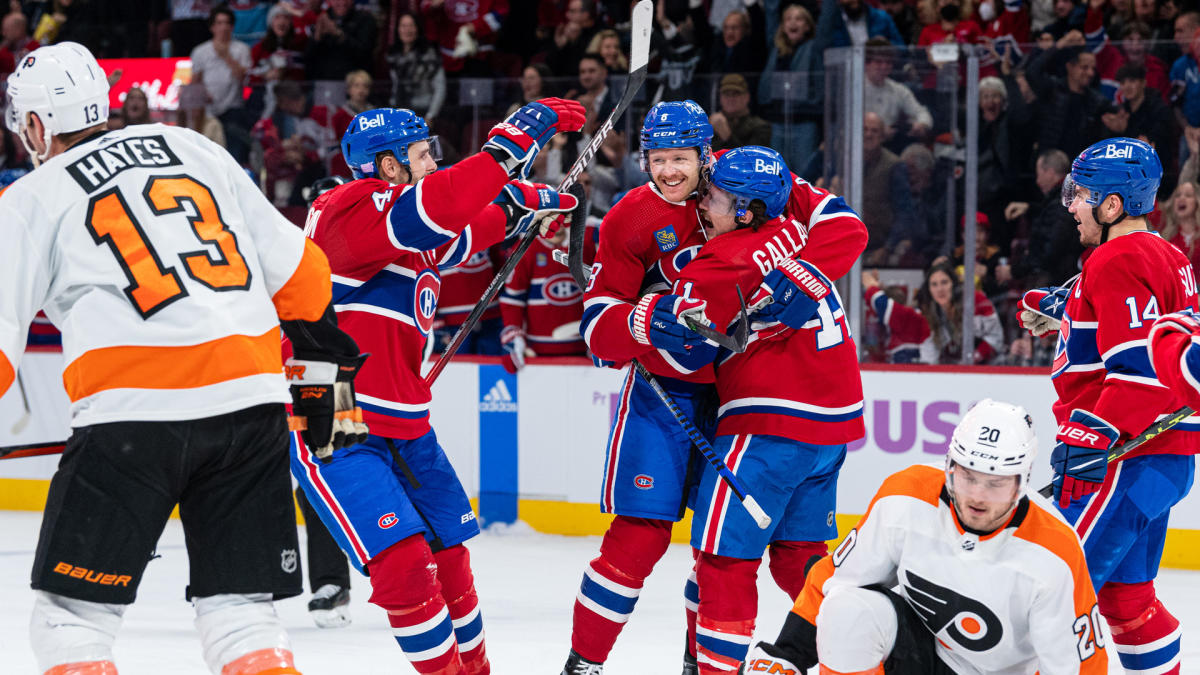 The Flyers were seconds away from snapping their losing streak Saturday night.

And then Cole Caufield happened.

The budding Canadiens star beat Carter Hart with just 1.9 seconds remaining in regulation to force overtime. Then, following a scoreless OT, Nick Suzuki tallied the only goal of the shootout to complete an improbable 5-4 Canadiens comeback victory at the Bell Centre in Montreal.

The heartbreaking defeat for the Flyers extended their losing skid to six games (0-4-2). John Tortorella’s club has conceded at least four goals in each of the six losses.

Adding injury to insult, the Flyers saw yet another forward go down one game after losing leading scorer Travis Konecny. In a scary scene early in the third period, Scott Laughton exited following a big hit from Kaiden Guhle.

Tortorella didn’t have an update on the assistant captain’s status postgame.

It was Caufield’s second goal of the night and 11th of the season. The 21-year-old winger also chipped in an assist.

Hayes has now tallied at least one point in five straight games.

Tippett’s first goal came in the game’s opening minutes, as he sniped one past Allen on the rush, and his second score was highlight-reel material.

Tippett, who entered the game with five faceoff attempts on the season, scored right from a second-period draw to even the score at 3-3.

Just 39 seconds in, Travis Sanheim cut to the front of the net and deposited a nice backhand feed from Laughton for his first goal in the 2022-23 campaign. Sanheim picked up an assist on Tippett’s first goal as well.

In the Flyers’ last five games, opposing teams are 8-for-14 on the power play. The Flyers, meanwhile, are 2-for-19 on the man advantage over that same stretch after failing to score on any of their four opportunities versus Montreal.

The Canadiens scored a third unanswered goal in the second period when Suzuki set up Mike Matheson, who was making his Habs debut, in the high slot with a slick spinning backhand pass.

Hart wound up stopping 28 of the 32 shots he faced, including four of five on the power play.

It goes without saying, but Konecny being sidelined for an extended stretch would be a huge blow to a Flyers forward group that’s already down Sean Couturier, James van Riemsdyk, Cam Atkinson, Wade Allison and now potentially Laughton.

Konecny had played in all 17 of the Flyers’ games entering Saturday, leading the team in goals (7) and points (19).

Mark Stone with a Goal vs. Edmonton Oilers

Connor McDavid with a Spectacular Goal vs. Vegas Golden Knights