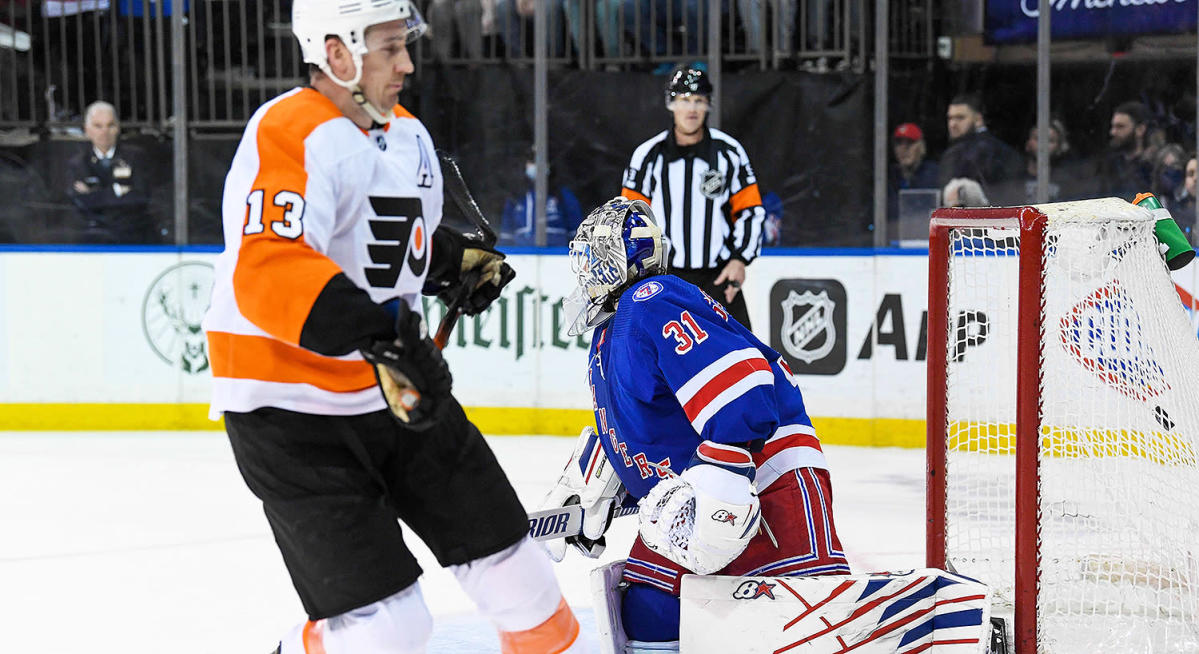 Despite relinquishing a 3-0 third-period lead, the Flyers picked up a morale-boosting 4-3 shootout win Sunday night over the Rangers at Madison Square Garden.

Mike Yeo’s club, which has struggled mightily on the road (9-20-5), won in a tough building on the second night of a back-to-back set. The decision marked the Flyers’ first shootout victory of the season.

• Against his former club, in his old home, Hayes was big time.

On top of the shootout winner, the 29-year-old center finished with an assist, four shots and won eight of 12 faceoffs in 19:55 minutes.

Hayes has been a point-per-game player since returning from an infection in his groin area, putting up five goals and 10 assists through 15 games after rejoining the lineup March 5.

With Claude Giroux on the Panthers and Sean Couturier and Scott Laughton out, Hayes has been front and center for the Flyers.

He has been a major positive for a team that desperately needs it.

More: As Yandle thinks of his teammates, Hayes feels for him with streak’s end

• The Flyers nearly let the night slip away, but that Rangers team was going to push.

What New York did to the Flyers was what it has done to many teams.

The Rangers are a terror in the third period, entering the game with a plus-28 goal differential during the final stanza. They came awfully close to improving their NHL-best comeback win total to 25.

After Artemi Panarin cut the Flyers’ lead to 3-1, Mika Zibanejad and Andrew Copp erased it in a span of 12 seconds with under five minutes to go in regulation.

• Backup Martin Jones, who was in net for the Flyers’ last win March 24, was terrific with 43 saves.

Zibanejad, Panarin and Filip Chytil couldn’t beat him in the shootout.

New York netminder Igor Shesterkin entered with a 2.13 goals-against average and .934 save percentage. The 26-year-old dropped to 32-10-4, allowing three goals on the Flyers’ 26 shots.

Despite a so-so stretch of late, Shesterkin is still the favorite to win the Vezina Trophy.

Impressively, two of York’s three career goals have come against Shesterkin, both of them in 2022.

• The ages of the Flyers’ goal scorers Sunday night:

The Flyers will hope that’s a glimpse of a youth movement heading into next season.

Why is that worth noting?

The Flyers went 41-21-7 in 2019-20, when their regular season was cut short after 69 games because of the coronavirus pandemic.

It’s still incredibly hard to believe how things went south so quickly and badly after such a promising first year of the Alain Vigneault era.

• Justin Braun‘s second game with the Rangers came against his former club.

The 35-year-old defenseman was a trade deadline casualty of the selling Flyers two weeks ago.

Braun has seen his share of healthy scratches so far among a deep New York blue line.

• After exiting the Flyers’ 6-3 loss Saturday early in the third period with an apparent injury, Nick Seeler was out against New York. Kevin Connauton took his spot in the lineup alongside prospect Ronnie Attard.

At forward, Hayden Hodgson reentered the lineup in place of Zack MacEwen. Yeo told the Philadelphia Inquirer’s Giana Han and Olivia Reiner pregame that MacEwen was banged up from his third-period fight with Wayne Simmonds in the loss Saturday to the Maple Leafs.

Laughton, who Yeo said is “itching” to play after he was cleared in his recovery from a concussion, did not suit up against the Rangers. The Flyers are likely playing it safe with Laughton, who very well could be a candidate to return Tuesday.

• The Flyers are off Monday before hosting the Blue Jackets on Tuesday (7 p.m. ET/NBCSP+).

Do the Mets need to acquire another starting pitcher before Opening Day? | SportsNite